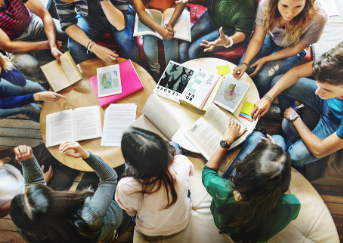 Many higher education leaders say they are “student-centered,” and I am no exception. In my case, my commitment to student success was recognized by the naming of the Student Center at Ramapo College and a scholarship fund at Adelphi. The origin of my commitment is easy to discern: it was the teachers and professors who guided me, and I have been passing on their approach.

In eleventh grade, while other students were contemplating college plans, I was uncertain of my future. Neither of my parents had gone to college. My mother had died when I was nine, and my father had suffered bankruptcy. He was a single parent with two young children.

One day, my 10th-grade biology teacher, in whose class I had earned a rare “A,” stopped me in the hallway and asked, “Bobby, why haven’t you signed up for the SATs?” Why, indeed? No one had encouraged me. The guidance office, knowing my family circumstances, had urged me to apply to an inexpensive, unselective Midwestern public university that did not require scores and was hungry for out-of-state students. I took the SATs, earned a scholarship to Bucknell University, and the rest, as they say, is history — a history in which the critical “hinge” was a teacher whose class I had taken a year earlier and who cared enough to encourage me

College was a starting point for me in many ways. My “well” of experience was enriched by the people, ideas, interactions, responsibilities, opportunities, and challenges it provided. It was in college that I became dedicated to a life of learning, the importance of questions, and writing as well as speaking for communicating ideas. It was there that some lasting ideas about liberal arts education were formulated and guided later decisions as a dean and a president.

However, I almost didn’t go, and then I almost didn’t stay. As a sophomore, I had doubts about why I was in school and whether I could afford it. Fortunately, my English professor and advisor talked me into rethinking my decision to leave and urged me to see the dean about additional scholarship assistance. Together, they helped me determine how I could stay financially and why I should stay intellectually. I have been indebted to them ever since.

I entered college planning to become a minister and graduated four years later with a job in management training at Procter and Gamble (P&G). After one and one-half years, I entered the US Naval Reserve and became a trainer in the cryptography school I had entered as a trainee. Then, because I enjoyed teaching and found it an invigorating respite from my daily routine, I paid dollars for others to take my duty watch so that I could teach English at the University of the Philippines center at my base — where I was paid in pesos, or 25 cents on the dollar.

During my Navy service, I met many younger men (no women) in the barracks, dining hall, and computer-supported communications center. These young people enjoyed little academic success in high school, even though they were curious and bright. They worked after school instead of playing sports or joining student organizations and were encouraged to join the military to “grow up.” I quickly became aware that, for many of them, it did not take a four-year tour to become more mature and reflective. For many, it took less than two years. Yet here they were.

So, instead of returning to P&G or going to business or law school, I returned to my alma mater Bucknell, as an assistant director of admissions with plans to pursue a doctorate in sociology.

Several years later, fresh with my Ph.D., an associate deanship, and a faculty position at Cornell University, I began to imagine what I could achieve if I managed to become a college president. This was the position where people, ideas, and resources could be brought together to enhance the environment for teaching and learning. First, though, I wanted to learn about public policy at the state and federal levels, so I took the opportunity to become assistant commissioner of higher education in Indiana. There, I formed my ideas about higher education as an instrument for democracy — and the role of a campus president chief mission officernot just chief executive officer.

While in Indiana, I worked with leaders of small and large institutions, liberal arts colleges and major research campuses, single-site and multiple campus universities, and both public and private colleges. I came to understand in new ways how higher education priorities and structures, as well as governing bodies, affected opportunities for student success. So, when I became president of Ramapo College, I called upon my sociological training to study the campus and the environmental influences on student satisfaction, retention, and graduation.

During my first month, I lived in a dorm room while my family was still in Indiana. Living among students provided a window on their lives and concerns as well as on facilities maintenance. I also asked the head of the theater department to study the campus as if it were a stage set. Then I asked him to give me a tour indicating where the promises in our mission statement were impeded or illuminated by our facilities and landscaping. I did something similar with the chief academic officer and deans in a review of the curriculum, graduation requirements, and staffing decisions. After all, I believe a mission statement is both a promise and a kind of script.

Later, at Adelphi, I enrolled in a freshman seminar in my first semester. One day during class, I asked a student how she spent her day, and where she “hung her hat.” When she said that her car trunk served as her closet, I was surprised. So, after class, I asked the vice president for administration to tell me how many lockers we had for the 5,400 commuter students enrolled at the time. When he said “40,” I suggested that we tour the buildings and locate places for lockers and lounges. Not long after, we had hundreds of lockers and dozens of lounges located around campus.

At the beginning of each academic year, I helped students move into their residence halls. This not only gave me an opportunity to meet students but also to meet and talk with parents. Then, later that day, at the Parents’ Reception, there were several dozen parents I had already met and with whom I could continue a conversation about how their students could gain the most benefit from the opportunities available.

On both campuses, I invited students, faculty, and staff to meet for breakfast, lunch, or dinner. I also met with them informally at sporting and cultural events. On each occasion, I asked two questions: ‘What is going well? What do you wish we had changed, added, or deleted last week?” I would then write up my notes and send them to the senior staff for discussion. Many important changes resulted, ranging from class scheduling, criteria for taking electives, food service hours, and mentoring faculty on the procedures for tenure, among others.

At each campus, the board’s primary attention was on traditionally aged undergraduates. At Adelphi, I remember being criticized by a trustee because, he said, too few students attended basketball games. I became defensive, as the staff and I had worked hard to provide students with the complete collegiate experience no matter where their pillow was located, and many had theirs at home.

That evening, I returned to campus for a reception and a lecture by a famous author. The talk was well attended, with many students. As I left the auditorium, I saw a group of students in one of the meeting rooms. I peeked in and was invited to join a group of about eighteen young African American women and listened as they discussed relationships with men and reviewed a PowerPoint presentation on male/female relationships over time. I was fascinated by the connection a student made between a 1940s newspaper advertisement that showed a white couple in a kitchen and a contemporary hip-hop verse. When I got up to leave, they invited me to meet with them again the next week.

After closing the door, I noticed in the next room a group of young African American men seated around a table. One of them saw me at the door and waved me in. I was enthralled as I listened to them discuss plans to tutor at a nearby junior high school and hold future sessions on how to be a “real man,” and that real men cry. They invited me to join them again.

When I turned to exit through the back door to reach my car, I was motioned by a staff member to come look at another room where about two-dozen students were making Origami pins with Japanese children to benefit a relief program. Again, I was fascinated by the degree of student engagement.

I had just seen about ninety students in total, anyone of whom could have been at the basketball game. Yes, there was a game that night, but instead of attending it, these students were involved in initiatives designed to achieve a greater goal. I learned the next day that the young women were part of a newly formed group called FOCUS (Females of Culture United for Success) and were becoming increasingly active on campus. The young men were part of a group called MOCA (Men of Color Alliance), and they were active both on and off-campus, working with younger students who faced many of the trials these more mature college students had conquered.

The third activity was related to a Japanese relief fundraising event to be held the next week, where students would be creating Origami Crane pins for purchase. The proceeds were to benefit the Japanese Red Cross Society by way of the American Red Cross.

These initiatives were inspiring. There were other student volunteers, of course, many organized through fraternities and sororities, and athletic teams, which set goals for helping others. What set that evening’s activities apart was that they were spontaneous and individual, combining purposeful activity with group enjoyment. And none of these students attended the basketball game.

When I think about the mission of a college, I think of it as a form of covenant, a promise, and a marker on a path towards advancing knowledge, enhancing skills and abilities, and promoting values ​​such as teamwork and respect for others. This is what we owe to students, as I learned from my own teachers.