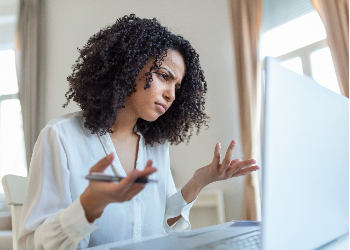 When attempting to impress a search committee or anyone with hiring influence, you might be tempted to use jargon and terminology related to your discipline. You want to project an aura of sophistication worthy of the academy. You want to be recognized as an expert. You want to “speak the language” of those within the highly specialized departments in the complex ecosystem that is higher education. You want to fit in.

But you might actually be sabotaging your candidacy. The reason is the ‘complexity trap.’ This term describes the assumptions people make when introducing too many complicated ideas or factors that cannot be grasped by an audience.

Colleges and universities are certainly complicated workplaces, so it’s easy to think that complexity is currency. But search committees in higher education often have at-large members, or representatives from various functional areas. And even within academic departments, where niche interests are freely exchanged, people can communicate complexity too much when simplicity is often desired. You could be in a room of fellow physics professors and even then not everyone may have the same understanding of concepts or theories that you possess.

“The temptation with academics is they go too far down the rabbit hole too quickly,” said Dominic Walliman, a science writer and physicist, as a guest on the Something You Should Know podcast. “The assumption of knowledge is the key to explaining things. It’s so easy to assume that people know stuff that you know because it doesn’t feel like a big deal to you when you know it, but for people who haven’t been exposed to that concept before, that could leave them grasping to follow what you’re saying.”

Using jargon in a job interview can also hurt you by signaling that you are overcompensating. Even terminology that is familiar to most people in higher education — “pedagogy” comes to mind — can arouse skepticism if a person is overusing a five-dollar word when a 50-cent word (“teaching”) will do.

“When people feel insecure about their social standing in a group, they are more likely to use jargon in an attempt to be admired and respected,” Columbia University psychologist Adam Galinsky told Derek Thompson of The Atlantic for an article titled “Simple is Smart.”

Thompson cited Galinsky’s research indicating that when people use complicated language, they tend to come across as low-status or less intelligent.

So, what should you do as a job candidate to explain yourself simply and effectively?

Ask Questions
First, don’t be afraid to ask questions to establish understanding. In his book “Think Again,” The Wharton School organizational psychologist Adam Grant shared research about what expert negotiators do differently, compared to average negotiators, which can be easily applied to people negotiating their job candidacy. They attempted to find common ground with the other party and they asked more questions.

This helps erase the assumption of knowledge, invites people to become partners in the conversation, not adversaries in a negotiation, and encourages them to think for themselves.

Provide Fewer Reasons
Next, limit the evidence for why someone should hire you. That’s right. Less is more. If you overwhelm people with too much information it will dilute the strongest reasons why you are the best candidate.

“Most people think of arguments as being like a pair of scales: the more reasons we can pile up on our side, the more it will tip the balance in our favor,” Grant wrote. “Yet the experts did the exact opposite: They actually presented fewer reasons to support their case. They didn’t want to water down their best points.”

Grant shared other studies that support this as well, including one he did with colleagues about donor solicitations. If given too many reasons to do something, whether to give money or hire a candidate, people become skeptical and resist someone trying to persuade them.

To heed the advice for the article you’re now reading, here’s just one more reason from Walliman:

Be Clear, Not Exact
Clarity beats accuracy, according to Walliman. This is not to suggest that you should provide a search committee inaccurate information about yourself, but don’t try to explain all the details about your research or other minutiae that’s not central to your candidacy or relevant to the audience’s interests.

“If I wanted to give (someone) the accurate description of quantum mechanics, (I’d) be here for weeks,” Walliman said. “It’s much better to start off with a simpler explanation that is not technically correct, but it’s the right thing for the audience to hear (to hook them) into the subject and get them interested to find out more. Then you can tidy up the details later.”

Later could be a second or third interview, or, better yet, as coworkers after you are hired.

Just don’t try to elbow your way into a job with jargon and assumed knowledge. Complexity is a trap and the best way to tip the scales in your favor is with simplicity.