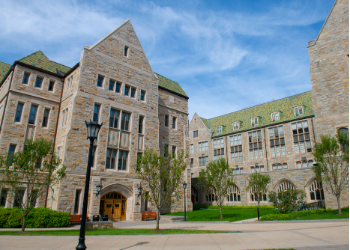 Universities and colleges are economic and ethical forces in society. They are central to human and community development as well as to issues of equity and equitable treatment. They are sources of fairness in the distribution of opportunity regardless of party, status, or wealth.

Universities as Unique Institutions
Now more than 1200 years old, universities serve three distinct roles — as creator, curator, and critic. Think of it this way: the university creates new knowledge through fundamental research into what is not known, new applications of what is discovered, and new interpretations of human activity through poetry and prose, body movement, music, and visual expression.

At the same time, the university is the curator of human activity, of our heritage as cultural beings, and the repository through archives as well as a database of past accomplishments, whether for good or evil. Therefore, history is important as a field of study. In fact, the study of history and the nourishment of imagination are two essential elements in preparing citizens and professionals.

The university is also a critic. It is at the margins of society questioning the status quo. It teaches students to raise ethical questions.

For these reasons, colleges and universities are unique institutions. As a former dean of Sarah Lawrence College said, “A college should be an institution where truth is sought, not where truth in all its dimensions is already known. In a college (or university) worthy of its name, free exchange of opinions and views is the essence of life … and health for the institution.” (This is a framed quote in the Dean’s Office by Laura Bornholdt, Dean of Sarah Lawrence College.)

Now, we know there are topics whose discussion is shunned, and whose mention can call forth catcalls of “racist,” “Anti-Semite,” “unpatriotic.” But if we cannot discuss controversial topics on a university campus, where can we? This is the role of the campus as critic, as the source of ethical debate.

When the university fulfills its role as critic, it must prepare to be held to the same standards. Unfortunately, they do not always stand up well.

Well, one such enterprise is a university. The annual operating budget, of even a moderately sized institution using a conservative multiplier, easily translates into an annual impact of hundreds of millions of dollars. Capital expenditures can increase these many times. Institutions also receive millions of dollars a year in federal and state financial aid, research grants, and other funds.

While tax-exempt, colleges and universities collect FICA, federal and state income taxes, and other taxes. When one adds in the restaurant, hotel, and other expenditures of those who visit a campus during the year for homecoming, reunions, cultural events, graduation, and sports events, the economic impacts grow even larger.

Each institution is not only an employer, but also hosts “hotels” (residence halls), “restaurants” (dining halls), and a municipal “police” force (public safety). Most also operate a transportation system of numerous vehicles of various sizes for travel on campus and between the campus and train stations, downtown shopping, and athletic events at other colleges.

But this is not all. Higher education institutions are more than economic engines in and of themselves. They also are teachers and partners whose intellectual, cultural, and capital assets spur human and community development as well. They are the source of new medicines, new legal theories, new understanding of society, and new ways of thinking and expression through their teaching, scholarship, and service.

These roles are often under-appreciated by policymakers. They and others focus on the need for engineers, scientists, and computer wizards without considering the number of technicians and technologists each requires, or the teachers, police officers, entrepreneurs, civic leaders, and volunteers who make our communities attractive and livable. Major scientific and medical facilities could not exist without the infrastructure essential for its creative activity. Universities play a major role in supporting these functions as well.

Many studies support the role of universities as important to economic, cultural, and civic development in their regions and beyond. They use their intellectual, cultural, and physical assets to support society. They also can serve as beacons of hope and ethical behavior.

Universities as Ethical Entities
What do we mean by ethics? How do we distinguish between and among ethics, morality, and law?

Morality is about knowing right from wrong, good from bad, with standards often grounded in some religious or theological tradition. By law, we mean public standards of behavior codified by the public’s representatives and interpreted by the courts.

The terms ethics and morality are often used interchangeably. However, ethics is the examination of morality and law by using the lens of fairness. Codes of ethics usually include the terms “fairness” and “fair.” Fairness is the condition or quality of being free from bias or injustice; unbiased free from favoritism, self-interest, or personal preferences in judgment.

Some actions may be legal and meet contemporary standards of morality, yet not withstand ethical analysis. This was the case with slavery. It was legal; most religious institutions and theologians did not speak out against it as wrongly as the Quakers did; but it did not stand up under ethical inquiry. Another example is Apartheid in South Africa.

As ethical forces in society, universities must hold up a mirror as well as a spotlight. They must foster a culture of conscience as well as compliance. In recent years, however, I have seen troubling images. Think about admissions scandals and the cover-up of sexual abuse. Other incidents include financial aid directors who took rewards from banks and non-bank lenders and promoted these companies over others. Some institutions have been found to “omit” certain categories of students when calculating average SAT scores to be reported to college guides.

Unfortunately, I could go on. Misleading photographs in admissions booklets, the graduation rates of Division I athletes, the conflicts caused by medical research sponsored by big pharma, the lack of availability of courses needed by students to graduate on time: my “industry” has some serious issues — not universally, but sufficiently widespread to cause me concern.

How can universities be a critic of society, as well as creator and curator, if they cannot withstand scrutiny? Why is it that universities have crossed the ethical “line in the sand”?

Some explanations include the unintended consequence of encouraging institutions to find new sources of revenue. They cite the need to make up for declining state support for public institutions and the mandate to moderate tuition increases at both public and private campuses.

Fortunately, this is not the end of the story. For every example of ethical breakdown, we can cite hundreds of cases of positive behavior. Universities are not only teaching environmental sensitivity; they behave as “green” institutions and partner with civic groups and businesses to promote sustainable practices.

Colleges are working closely with school districts in preparing new teachers and providing continuing professional development to teachers, principals, and superintendents in academic areas and leadership. They are partnering with community groups as well as schools to promote college access and upward mobility.

Universities are employing a range of tools to assess student learning, improve faculty teaching, and promote student success and graduation. These tools and techniques are more available than ever to assess institutional effectiveness. All accrediting bodies expect their use.

United States higher education is a beacon to the world, and, before Covid-19, many more students came to the US than left to study elsewhere. Other countries have strategies to compete with our institutions for international student recruitment and they borrow from our accreditation practices.

Conclusion
In conclusion, US higher education is not perfect, to be sure. But it is laudable as well as fallible, more successful than not, and serves society well as creator, curator, and critic — that is, as a major force for economics and ethics.