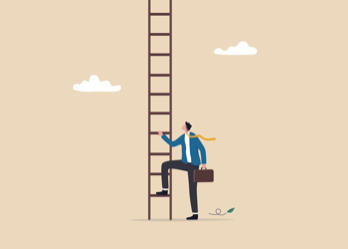 Job titles are important in higher education. Imagine if all faculty had the title of “professor” and administrators were all considered “associates” or everyone took turns being “project managers.” Colleges and universities are far too complex to operate with a flat organizational structure. But despite working within byzantine hierarchies, or what many people pejoratively call “silos,” higher education professionals are relatively autonomous compared to those in other industries laden with middle managers.

Job titles in higher education are not standardized across all institutions, but there’s often a clear distinction between the academic and the business/operations sides of the house. On one side you have deans or associate provosts, and on the other are the executive directors and assistant vice presidents. Faculty titles are fairly scripted by a defined promotion and tenure process, with those on the tenure track typically assigned to assistant, associate, or full professor. They are led by department chairs, who are professors that also perform administrative duties.

Individual schools might protect which administrators get a particular designation, and the bigger the institution, the more its job titles follow a classification system based on salary levels and promotion schedules. There’s more ambiguity or leeway in determining job titles at smaller, private institutions, but that often comes with title-holders having more responsibilities. That leads into the first tip:

Compare Job Descriptions, Not Titles
“The context for a job title is different for every school,” said John Rindy, assistant vice president for career and academic progress at Slippery Rock University. “At larger schools, there’s a natural progression from a director, to an executive director, to an AVP, and to a VP, because it’s a big enough hierarchy and you have places to move, whereas at a smaller school, an executive director might wear many hats.”

Having a greater job title benefits higher education professionals not only in status at their current institutions, but it makes them more attractive to recruiters hiring for other institutions. Rindy recommends that people do their research by reading LinkedIn profiles or job postings and conducting informational interviews before asking their supervisor for a new title or applying for other jobs.

“Probe in to see what kinds of things other people are doing, and then make sure the schools are comparable,” Rindy said. “If you’ve been a specialist for a while, you’ll need evidence to say that you’re doing the work that a director or associate director is doing at a different institution that’s the same size, or one that has the same financial paradigm or classification structure.”

Build Your Case for a Promotion
Faculty are made aware of what they need to gain tenure and promotion, but for administrators, it’s not systematized or a one-and-done proposition, like applying for a job.

As you collect your evidence to justify a promotion, recognize that you might have to build your case and wait for the right opportunity to ask your supervisor. This might be during your annual evaluation or after the completion of a successful project, such as an accreditation review, but not at the start of a semester or during a period of turmoil.

If you’re an administrator seeking a job title change at your current institution, ask for a promotion that includes a request for a higher salary. You might get a better job title as a concession for not being offered a raise. After all, a better job title is currency on the job market.

“Once you have that director title, it certainly makes more jobs out there open to you,” Rindy said.

However, a lesser title doesn’t disqualify you from taking a step up, or else everyone would just be making lateral or downward moves. If you are doing work that exceeds your job title, there are ways to get the attention of recruiters.

Be Clear on Your Application Materials
Hiring managers are reading application materials more than you might think. If a recruiter eliminates you from consideration based on your current job title alone, you probably weren’t qualified anyway. According to Rindy, a job title validates your candidacy as long as you are one position level away from the job for which you are applying.

Don’t resort to lying on your resume/CV by listing what your title should be, or even parenthetically citing an equivalent title. Instead, make it obvious based on your tasks listed.

“It goes back to writing an effective resume and cover letter that contains the skills, knowledge, and experiences that they are looking for,” Rindy said. “Move that up on the page and make sure you are socking them right on the nose with it by saying, ‘You’re looking for this … well, I’ve done this, this, and this.’”

Rindy recommends using up to 10 bullet points on your cover letter (two columns of five points) that speak directly to the job description so that the evaluator clearly knows that you were working above your actual job title.

Use Your Title to Connect with Others
Pursue an elevated job title to gain influence –– and consequently perform better in your work –– instead of inflating your ego.

“Hierarchy breeds, to some extent, arrogance, not just in higher education but in the corporate world, too,” Rindy said. “But if you’re taking advantage of (having the job title of) the next position up, that opens the door to work with other people at that same level or even above them.”

For example, once you have the title of director, you might find yourself in more meetings with influential people who have an equivalent position at your institution. People might even be more open to your requests to collaborate. Even if you don’t have a senior-level job title, there are also opportunities in higher education to serve alongside those above you and cross-functionally, such as on accreditation, advocacy, or other planning committees.

“That means you have more resources at your disposal,” Rindy said. “Take advantage of having more behind-the-scenes information. I’ve never met a single person in higher education, who, in the long run, is successful by sitting at their desk all day. You have to get out of your office.”

Prioritize Happiness Over a Title
Job titles are important, but like having a lot of money, they aren’t everything. Don’t get caught up chasing a fancy job title because it looks good on a resume or it’s the next logical step in your career.

Define what career success means to you, and not to those who assign or judge people’s titles, and set your path to reaching that ideal future. Avoid forsaking your happiness for a higher salary or to signal status.

If everyone worshiped at the altar of job titles and workplace status, people would be more likely, as the Peter principle statesto rise to the level of their respective incompetence.

“This doesn’t mean you’re not ambitious or competent enough (to pursue a promotion),” Rindy said. “You can be changing and growing and doing something new without getting a new job title.”

Know thyself enough to remove professional identity or self-worth from having a job title. Career success is in the doing, not the having.

“It’s not always the greatest thing to get promoted,” Rindy said. “Just be careful what you ask for.”