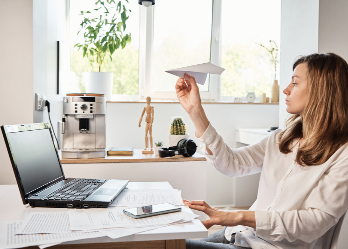 We all procrastinate by putting things off that we ought to be doing. Higher education job seekers are particularly susceptible to procrastination, but not because they are lazy, lack ambition, or are undisciplined from having low self-esteem. It’s quite the opposite. Motivation, a strong work ethic, and a high sense of self-worth are actually the reasons people procrastinate.

Procrastination is a protective strategy for coping with conflicting motivations, according to Dominic Vogue, senior associate director of the McGraw Center for Teaching and Learning at Princeton University.

Job seekers have conflicting motivations. They desire financial security, having their values ​​aligned with those of an employer, and serving the common good, all while achieving some level of career satisfaction. They also have a lot to protect: their personal brand and their candidacy (or “worth” to potential employers) that are being judged by colleagues and search committees.

Higher education professionals especially have a lot to protect. They work in these fortresses of knowledge built on prestige and reputation. They earn credentials that supposedly prove their competencies and capabilities, which feed into a sense of self-worth, which Vogue identified as the most important psychological need.

“Because it’s the primary paramount need, we will actually sacrifice or trade off other needs to realize, achieve, or meet that need,” Vogue said. in his 2017 TEDx Talk about self-worth theory. “And that’s where procrastination comes in.”

Performing well in your job is often equated to self-worth, at least in terms of your career — and, sadly, for many professionals, this sense of self-worth is equivalent to their identity as a person as well. Even though higher education professionals love what they do, and really want that tenure-track job or that senior-level administrative position, they’re willing to forsake these ambitions to preserve their psychological needs.

“From a self-worth point of view, it’s not self-sabotage; it’s self-protection,” Vogue said. “You can want to succeed (at a task, but) you can also really fear failing on such a task.”

That’s why highly motivated people are more likely to procrastinate by overextending themselves and become “workaholics” to avoid damage to their sense of self-worth.

“If I have so many things to do, then if I don’t perform at an exemplary level or I’m not judged as being outstanding in some part of my work, then I have a built-in excuse,” Vogue said as a guest on the “Something You Should Know” podcast. “(They’ll say), ‘I had so many things to do; I couldn’t achieve at that level.’ Being overextended is a kind of procrastination.”

A job seeker could say, “I would’ve been hired if I were outgoing enough to network with the right people at that institution,” or “I could get my Ph.D., but I don’t have enough time, energy , or intelligence.”

Even submitting an application could damage one’s self-worth if a job seeker fears rejection. But there are also people who procrastinate in their job search by overextending themselves and submitting too many applications instead of doing the hard work of networking, conducting innovative research, or performing better at their job. They could throw their hands up and say, “Hey, I applied; I just wasn’t selected.”

So how do you, as a higher education job seeker, avoid procrastinating?

The first step is awareness.

“We know, from the research on procrastination and overcoming it, that gaining knowledge, being aware of self-worth theory and these dynamics helps people overcome these things,” Vogue said. “To understand the roots of procrastination helps us weaken it.”

The next is unbundling your performance, ability, and self-worth as a person and a professional. If you’re trying to protect all these motivations and areas of your life, it’s good to divide and conquer when it comes to your perspectives.

“Our performance is not equal to our ability,” Vogue said, noting that people sometimes underperform and get a good result or have the inverse occur. “It’s simply not representative. But more importantly, your ability is not equivalent to your worth.”

For a more tactical approach to defeating job search procrastination, you should develop better habits to ensure that you are applying for jobs, or networking, instead of getting caught up in the daily grind of your job or other commitments. This was covered in a previous HigherEdJobs article using tips from James Clear’s book “Atomic Habits.”

Perhaps the best way to curb your procrastination as a job seeker is to consolidate your competing motivations and focus on a personal mission that is deep, abiding, and enduring.

“How does this fit with my mission?” Vogue said. “I see my purpose in life, my mission in my work, is to reduce suffering, specifically of students so that they can be more engaged in their academic work, in their lives, and to thrive and flourish.”

Notice his use of “my” and not his institution’s mission, purpose, or work. This is an important distinction because too often higher education professionals get caught up in reacting to the immediate needs of their institution, their students, or whatever task happens to appear at the top of their email inbox.

Your worth is not tied to responsiveness, perceived value, or whatever outcomes you provide to your current institution. Think of how you can improve upon your station in life, whether that’s collaborating more with coworkers or searching for a better job, so that you can fulfill your overall mission and benefit more people over the course of your career.

Faculty have an easier time doing this than administrative staff because many professors think of themselves as independent contractors who are evaluated on their teaching, scholarship, service, and not so much the collective success of a department or institution.

This doesn’t mean you should be selfish and operate as a solo practitioner, because no one in higher education works in complete isolation, but it’s a way to experiment with your motivational profile. It could mean being a helpful person. This reduces the pressure to protect your self-worth.

“(Experimenting is) a little different way of talking,” Vogue said. “It lowers the expectations and it lowers the stakes.”

And when the stakes are perceived to be too high, you’re likely to fold your cards instead of playing your hand. For a job seeker, that’s called procrastination.

“We can think of it as a bad habit,” said Vogue, speaking to his TEDx audience at Princeton University. “But I want to ask you to consider more deeply, to introspect, look inside, and look for the deep motivational roots of procrastination so that we can overcome that and flourish and truly thrive in our lives and in our work as teachers and as learners. .”