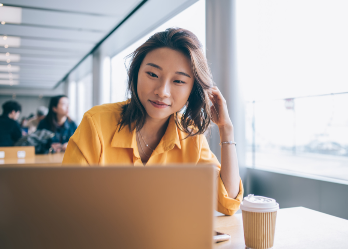 Job seekers are typically categorized into two groups: active and passive. Active job seekers have their resume/CV updated and are eager to apply for a job and make a career move. Passive job seekers are currently employed and not actively looking for a new job, but they are open to new opportunities if they come along.

Higher education professionals should not look at themselves as one of two job-seeker types, nor should they look at their careers as this linear destination, meaning you either have your dream job or you don’t, or you’re either on your way or you’ve arrived.

Careers aren’t trips to the shopping mall where you obtain what you want or you are convinced by a retailer to buy something that you weren’t actively pursuing.

Instead, higher education professionals should consider themselves on a path of mastery in their discipline and in a particular career season.

Path of Mastery
Mastery, as defined by author George Leonard, is “the mysterious process during which what is at first difficult becomes progressively easier and more pleasurable through practice.”

“We all aspire to mastery, but the path is always long and sometimes rocky, and it promises no quick and easy payoffs,” Leonard wrote. in his book “Mastery.” “So we look for other paths, each of which attracts a certain type of person.”

1. The Dabbler loves taking on new challenges but once they lose progress they typically quit and try something else.

2. The Obsessive is all about achieving intended results, but unlike ‘The Dabbler,’ when they hit a plateau, they double down and try to work towards the solution despite tremendous sunk costs.

3. The Hacker takes a few hacks at something until they get a hang of basic skills then they lose interest in mastery and remain content staying on the plateau indefinitely.

Do you identify mostly with one of these personality types? If so, you should consider changing your approach to work and your job search. Mastery is about staying on the path and committing to your practice. The rewards are not the goal, rather the practice is the goal.

“Mastery is the process of continuing to solve the same problem in new ways, rather than stopping at an acceptable solution,” wrote author James Clear.

If you feel like you are mastering the practice of job seeking, perhaps you should look at your circumstances more long term, instead of thinking “I need a new job right now!” That’s understandably not easy, especially when you’ve reached a plateau. But you can’t dabble your career away, even if you’re a persistent job seeker and the only quitting that occurs on the plateau is employers’ interest in you.

A good practice is to develop a healthy balance of exploring and exploiting.

Explore vs. Exploit
The explore/exploit trade-off is something clearly discussed in his book “Atomic Habits.” Whether it’s a job search, dating, or learning a musical instrument, people encounter a period of trial and error in their lives as they try out the many possibilities and find their best solution.

Even after you’ve identified the best solution, keep experimenting — or keep being a passive job seeker.

If you are continuously losing in the job search, perhaps you need to accrue more career capital (skills, contacts, reputation for doing good work). After gaining more experiences and expanding your professional network, you can later “redeem” them for a job offer, that is, if the idea of ​​”exploiting” makes you feel ruthless.

For higher education professionals, exploring and exploiting is often more pronounced because the stakes and the walls of the ivory tower are so high, and for faculty, they often occur in two waves. Generally, you explore your possibilities or research interests as an undergraduate and graduate student, then you go all in to exploit an expertise to earn a Ph.D. In your job search, you explore and figure out how to adapt your collective skills to whatever’s available on the job market, only to again, once hired, exploit a highly specialized discipline or area of ​​research to gain enough publications or other career capital to secure tenure

Whether you’re faculty, staff, or an administrator — or aspiring to work in higher education in any of these positions — it’s helpful to recognize your career season.

Three Career Seasons
According to author and personal finance adviser Ramit Sethi, people often don’t think about where they are in their careers and how that informs which job they want. They just type a job title on LinkedIn and think of themselves in the pool of other active job seekers.

1. growth, when people prioritize learning and earning more and they are willing to put in the time.

2. Lifestyle, when people want to prioritize their time outside work, such as taking care of a family.

3. reinvention, when people want to completely reinvent themselves, including the role and even the industry they work in.

These seasons align with many higher education careers with the rigorous credentialing, followed by the elaborate promotional structure and its benefits for those who advance, and finally how people will reinvent themselves by becoming instructors after working in industry or becoming a dean or other administrator after serving as a faculty member.

In this way, seasons often fit into the chronology of a career: growth in your 20s and early 30s, lifestyle when you reach a station in life with financial security and flexible schedules, and reinvention when time is running out and you want to try something new or leave a legacy before it’s too late.

But career seasons are not always linear and they could change at any time or you can cycle through them more than once.

Knowing which season you’re in won’t tell you when to explore or exploit either, although growth is typically a time for exploring, lifestyle for exploiting, and reinvention a mixture of the two. According to Sethi, recognizing career seasons makes you more strategic in your job search.

“Without understanding your career season, how can you find a job that’s perfectly made for you?” Sethi wrote. “Your season has profound implications for the jobs you look for and even the way you search for your job.”

You might focus on a job’s earning or growth potential, or the flexibility to work remotely, or try other things that could lead to a reinvention. But Sethi said that you shouldn’t try to embrace two seasons at the same time because doing so will inhibit meaningful progress in either area.

In conclusion
Don’t define yourself as an active or passive job seeker. You’re always a work in progress on a path of mastery. Explore and exploit at various times in your career. Know which career season you’re in and tailor your job search accordingly. And, most of all, be patient. Nothing hard-won or worth having in your career happens all at once.