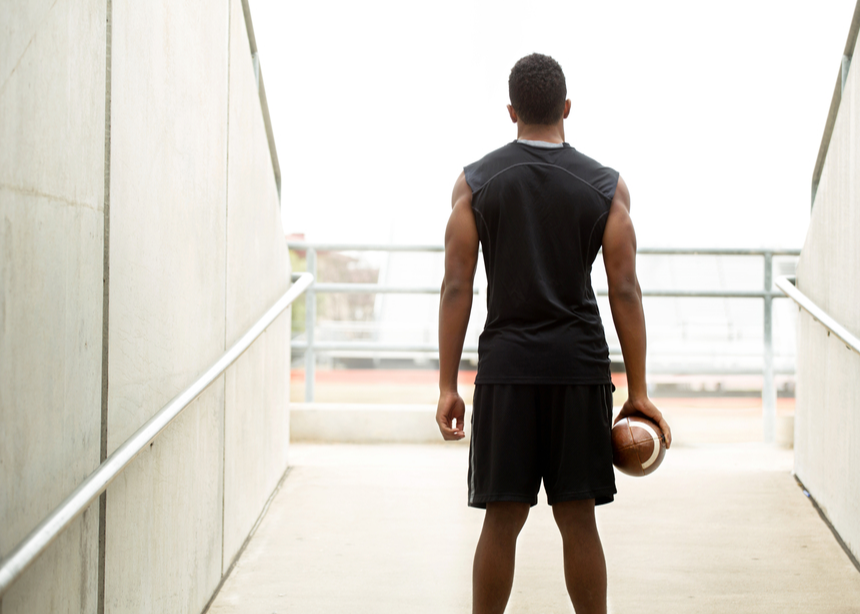 These are common misconceptions about athletes across National Collegiate Athletic Association (NCAA) institutions and are particularly pronounced when discussing athletes participating in football and men’s basketball.

These stereotypes come with racial and class undertones. Athletes competing in Division I football and men’s basketball are predominantly men of color. According to the NCAA’s demographic database, 63 percent of athletes in Division I football are athletes of color, and in men’s basketball, this representation jumps to 77 percent. Additionally, athletes competing in these sports tend to come from lower socioeconomic status (SES) backgrounds.

The mixture of unfounded race, class, and athlete-based stereotypes perpetuates deficit perspectives of athletes of color from low SES backgrounds competing in these sports. Deficit perspectives indicate that a certain group of students, often those from traditionally marginalized groups such as athletes or first-generation students, are disadvantaged in college because they lack the capital necessary to succeed. Indeed, individuals from traditionally oppressed groups are often socialized into adopting certain kinds of capital to conform to white, dominant norms.

CCW is the “array of knowledge, skills, abilities and contacts possessed and utilized by Communities of Color to survive and resist macro and micro forms of oppression,” Yosso wrote in a 2005 article. This model maintains that students from minority groups, particularly regarding race and class, have different kinds of capital that are distinct from dominant white middle-class capital, but are still useful in achieving success. These forms of capital include: aspirational, linguistic, familial, social, navigational, and resistant capital.

Given the similarities between students Yosso discussed, students of color from low SES backgrounds and college athletes in football and men’s basketball, this model can be extended and adapted to include athletes who fit the criteria in these two sports.

Aspirational Capital
Aspirational capital is the ability to preserve hopes for the future. This capital is arguably most commonly seen in athletes with aspirations of playing professionally. However, it is also displayed in those with goals of competing in college while receiving an education. Athletes cultivate this capital at a very young age as they have goals to attend and represent a certain institution.

While athletes may not always have a clear path, aspirational capital can keep them focused on their goals. Such focus is necessary when academic and athletic obstacles emerge. Academic struggles may include stereotypes and poor advising. Athletic hurdles can include injury and issues with playing time. Regardless of difficulties, athletes employ this capital in their endeavors for excellence.

Linguistic Capital
Linguistic capital involves the unique language and style of speaking that individual teams create. Through practice, competition, and film, athletes hone this capital as it relates to their craft. Additionally, this form of capital also includes communicating through visual art. Athletes display this kind of capital as they run, execute, and communicate through plays and schemes in their sport. This perspective may allow for the reclassification of athletics from something that is merely extracurricular to something more academic, mirroring disciplines such as theater and dance. Thus, we might consider asking, why, for instance, is it beneficial capital for a student to read sheet music, but not beneficial for a student to read Xs and Os?

Familial/Team Capital
Familial capital is defined as values, traditions, and knowledge fostered by a person’s family unit. This capital can be fostered by people who are relatives or from those who are “like family” such as friends. Literature notes that this form of capital might be particularly important for college athletes of color.

For example, families of athletes of color are stereotyped as only reinforcing athletic prowess. This is another myth. Research demonstrates these families use their familial capital to support athletes across athletic, social, and academic arenas. This capital also intertwines with aspirational capital. Scholar Joseph N. Cooper and colleagues contend that familial capital cultivates athletes’ aspirational capital to “excel academically because of their race, sex, athletic status, and family background as opposed to in spite of these identities.”

An extension of family capital is team capital, or knowledge nurtured to create a sense of team legacy and culture. Teams often establish traditions that are passed down, such as creating a mentor-mentee program matching a first year athlete with an older teammate. In fostering team legacies and cultures, some teams commit to one another by having a “dry” (no alcohol) season so that they can perform and give their teammates their best. In building team capital, athletes often lean on one another during challenging times socially, academically, and athletically.

Research notes that athletics can ostracize participants, particularly in football and men’s basketball, from the rest of the campus. However, few have framed the time athletes spend together as a way to build team capital and enhance their college experience. This time spent learning with and about one another can create a culture of acceptance and care, like family capital.

Social capital
Social capital includes the community resources and contacts athletes create as they seek emotional support and guidance in college. These include athletics department resources, along with coach, counselor, and teammate support. Research indicates that Division I athletes have more frequent interactions with diverse others compared to non-athletes. These interactions not only foster acceptance and community but also ensure a larger network, which aids in growing athletes’ social capital.

Social capital also involves relationships athletes build outside of sports with faculty, staff, administrators, and non-athlete peers. Through social capital athletes showcase their unique forms of capital and their benefits. Such opportunities may result in more appreciation for athletes and acceptance of diverse talents and meaning making associated with sports.

Athletes in football and men’s basketball represent a small fraction of students, but potentially a large fraction of minority students on campus. Thus, this group will likely need navigational capital to move through their institutions (often PWIs). Similar to conditions students of color encounter, athletes of color also experience stressful events that can hinder success: racism, intellectual stereotypes, major clustering, and feelings of exploitation. Through navigational capital, athletes find ways to maneuver through such obstacles.

Resistant Capital
Resistant capital is fostered through counter behaviors that protest inequality. Examples of resistant capital can be seen as athletes raise their voices about discrepancies in compensation, educational opportunities, and rights to name, image, and likeness (NIL).

Athletes also resist the notion that they should just “stick to sports.” After the murder of George Floyd, athletes, particularly athletes of color, employed resistant capital. Resistant capital can be seen in the ways in which athletes not only participated in protests for racial and social justice, but organized their own. More athletes of color took to social media, sharing their own stories about macro- and microaggressions, while others knelt for the national anthem.

As higher education begins to promote strengths-based perspectives of various student groups, practitioners and scholars should extend these perspectives to college athletes of color from low SES.

Faculty, academic administrators, and others should accept athletes’ unique forms of capital to develop a deeper appreciation for this student group. Faculty who adopt a strengths-based view may also be better positioned to educate athletes.

Additionally, those working in athlete development units could design programming to help athletes understand the benefits of their capitals and assist athletes in further cultivating their CCW. This would better prepare athletes for their future, whether or not it involves sports.

As campuses seek to become more inclusive for all students, now is the time for scholars and practitioners to do away with deficit perspectives of college athletes and appreciate this student group for all they bring to university communities.