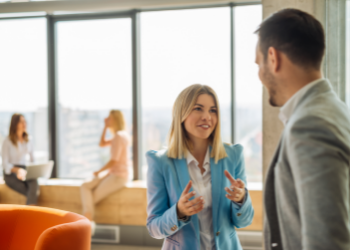 Each day we send and receive thousands of communication signals. According to experts, anywhere from 70-93 percent of our communication is nonverbal. Because communication plays such a massive role in leadership, leaders must be aware of how all their non-verbal signals are being interpreted as well as how to read these cues in others. This is especially true for higher education leaders.

Often, we think of non-verbal cues as consisting of eye contact, facial expressions, and movements like hand movements, but there are many more subtle cues that transmit a more complete picture of who we are. Being aware of these aspects of our communication can have far-reaching effects on our leadership abilities. Here are five non-verbal cues you may not have considered that speak volumes to those you lead.

Personal Space
Proxemics is the study of personal space. Cultures have different “proxemic zones” for what is considered acceptable. For example, in North America, a good rule of thumb for professional distance in a conversation is to extend your arm and point your thumb to a person’s ear. However, in Latin-America, and other regions, a closer distance is preferred. Standing too close to someone can obviously be uncomfortable or off-putting to your audience. Just ask Seinfield.

Paralanguage
Paralanguage is not what we say, it’s how we say it. The pitch, rhythm, tone, and inflection of our voice can give two entirely different messages. The classic example is when someone asks us how we’re doing on a grumpy day, we respond with a curt “fine.” We are not fine, of course, and the tone of our voice conveys an underlying message.

Leaders should be aware of paralanguage. A strong tone of voice conveys approval, whereas a hesitant tone might show a lack of interest. Supervisors needing to express authority should lower the tone of their voice. Dropping the last syllable of a sentence carries assurance while raising it leaves statements open to interpretation. Paralanguage can also get a leader into trouble. When precision matters, it is usually better to find the right words than to leave others to decode our messages.

Physical Touch
The study of haptics simply means communication through touch. Like the “haptic response” on a cell phone, we can adjust the amount of touch we give depending on others’ preferences. Touch can communicate affection, empathy, trust, or commitment.

Leaders should be cognizant of how their use of touch is affecting others. Leaders should speak out against unwanted touch in the office, but a “touchless” workplace is not universally desired either. Spontaneous high fives, fist bumps, and handshakes can bring teams together. It’s better to always ask before giving a hug, and candid conversations are encouraged among staff about personal boundaries.

Posture
Most discussion on posture only emphasizes avoiding defensive postures like folding arms or crossing legs in conversation. However, positive postures can go a long way toward signaling openness, approachability, trust, or other positive leadership traits.

In general, leaders should show openness in their conversations. When speaking, instead of clasping hands, keep your hands open and palms out. This shows sincerity with nothing to hide. When listening to someone speak, keep an open and relaxed stance, leaning into the conversation. When crossing legs, cross your legs towards the individual you’re speaking with, as if you are closing the circle with them.

Physical Appearance
Finally, physical appearance is a catch-all for our clothes, colors, hairstyle, accessories, and other elements that make up our visual appearance. These are considered non-verbal communication because they account for a significant part of our first impressions to others.

Like it or not, others will make judgments on our character and competence based on our appearance. Like the unsuspecting man in Tide’s 2008 Super Bowl commercial, it’s important to be intentional in our choice of appearance and not send conflicting messages. Expectations vary based on your campus culture and dress standards, but leaders should always represent themselves at the top of these standards.

Managing all forms of our non-verbal communication at once can be overwhelming, but much of this happens sub-consciously. The key is to be consistent between forms of communication and congruent with what’s culturally expected in each setting. When our verbal and non-verbal signals are split, we undermine and weaken our overall message. When these are in sync, they become a powerful double-message.

Communication is so essential for leaders that some define communication and leadership as one and the same. Craig Johnson and Michael Hackman said, “Leadership is communication that modifies the attitudes and behaviors of others.” If the majority of communication we send is non-verbal, it is important that leaders ensure they are always giving the right messages.