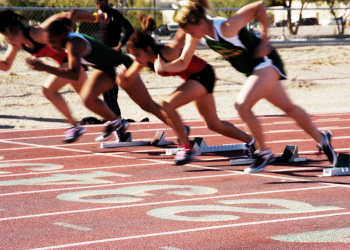 When it comes to landing a spot on a college sports team, a student’s chances are profoundly affected by their parents’ wealth and education. Even college sports recruitment favors white suburban athletes.

Those two findings come from our collective research as sport sociology and education scholars. As former college athletes, we have lived and studied what it takes to become a college athlete. We found that becoming a college athlete takes opportunity, investment, commitment and suitable social interactions.

Our research supports what many college athletes that we spoke with, such as Malcolm — a Black man who grew up in a white suburb and is a second-generation college athlete — already know.

Malcolm observed that the chances of becoming a college athlete depend on where you grow up, how much money your parents have, What your parents know about the college and sports pipelinesand who can help give you a leg up.

“People think Usain Bolt is the fastest man in the world because he has the fastest-man-in-the-world genes. I honestly don’t think so,” Malcolm explained. “I think there’s somebody on the block somewhere that can probably run faster than Usain Bolt if they got the same coaching and the same technique. … I don’t think the world sees that. … [Bolt] put his time in. … You have to put your time in regardless of what sport it is.”

Malcolm is just one of 47 college athletes interviewed as part of our work. We also tracked what happened to 7,810 10th grade students over their next four years.

Community Effects
CM, a white woman and long-distance runner who played six different sports before becoming a college athlete, was among the students interviewed from more affluent families. Her hometown was “as suburbia as you can get“It included”27 pools, two lagoons and two manmade lakes“; a recreation center with tennis courts and softball and soccer fields; equestrian facilities; and running trails.

Accordingly, our study of 10th graders found that going to a wealthier school, having more school-sponsored sports offered and playing multiple sports led to higher chances of becoming a college athlete. Compared to attending a school with hardly any students who were poor enough to qualify for free or reduced lunch, attending a school where 75% or more of the student body was on free or reduced lunch was associated with cutting a student’s odds of becoming a college. athlete almost in half.

Consequently, we found schools’ proportions of low-income students and both students’ own college-going expectations and the extent to which others expected them to go to college were associated with students’ likelihood of becoming a college athlete.

Among the 47 college athletes, 94% played sports by kindergarten and 77% continuously played on club teams that typically cost $1,000-$4,000 annually. Paying for private coaching and elite training camps was also common and even more expensive.

As Malcolm noted, developing athletic talent requires commitments of time and energy, too. Nearly 80% of the 47 college athletes played sports 5-6 days per week in high school and 36% practiced twice per day. Wealthier athletes could invest this time because they were largely freed from work and household responsibilities. Also, their parents had high-paying and flexible jobs.

Our study of 10th graders confirms that parents’ wealth and education enhance college expectations and the likelihood of becoming a college athlete. These things matter beyond athletic merit.

Know-how
Finally, having parents who went to college helps students Do well in school and get into college. College graduates are more aware of and comfortable with the processes of preparing for college and applying to college. This is because they have generally done well in school, know other successful college students and learn about their experiences, and are more likely to know and seek information about college admissions.

This helps them find out What admissions officers look for in applicants.

Erwin, a white man with college-educated parents, initially played soccer and baseball but described himself as second-rate. His mother learned through friends that participation in niche sports, like rowing, increases admission chances. So, she signed her older son up for fencing and Erwin for rowing. Erwin eventually rowed in college.

Knowing that coaches largely control athletic admissions is key. Also, it helps to learn that athletes can do things that are looked at favorably by college recruiters. This includes purposefully pursuing a less-popular sport, creating attractive marketing materials that highlight their athletic achievements and include recommendation letters from respected coaches, and taking unofficial campus visits. Athletes who effectively used this knowledge could be mediocre at their sport and still get admission offers from colleges.

What Does This Mean?
One way to reduce the negative effects of needing money to play and succeed in sports is to work together within our communities and as a society to embrace a sports-for-all, play-for-life ethics. This approach can help make sure that sports are more inclusive, athletic talent is nurtured and that the benefits of sports participation are provided to more people throughout their lives.