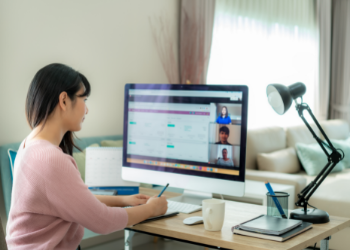 As the COVID-19 pandemic waxes and wanes, many people want to continue working from home even as offices, factories and stores reopen.

But employees are divided about the positive and negative aspects of remote work — and their perceptions are colored by gender, ethnicity and caring responsibilities, according to research from the Society for Human Resource Management (SHRM).

“Businesses that fail to understand the gender gap and other inclusion issues in remote work will see DE&I [diversity, equity and inclusion] efforts fail as women lose opportunities to network and connect with other employees,” SHRM researchers wrote. While men and women who work remotely agree that they are more productive — and tend to work more hours — women reported being more productive than men ( 40 percent and 35 percent, respectively).

Female remote workers said they were most concerned about working longer hours and having fewer opportunities to network and form relationships. Men, more so than women, think managers will view them negatively for working from home, resulting in poor performance evaluations.”

The impact of remote work on career opportunities is felt across industries when roughly 10 percent of women and 13 percent of men remain concerned about promotability and access to learning,” said Alex Alonso, Ph.D., SHRM-SCP, SHRM’s chief knowledge officer. .

“Remote-work impact remains a great unknown, with business leaders wanting to preserve culture while offering workplace flexibility where appropriate,” he said. “Doing so calls for a balance between the immediate and long-term good for the workforce and organizational needs.”

Ethnicity, Industry Differences
There were also marked differences in viewpoint depending on the ethnicity of respondents and their industry, according to the online survey conducted June 16-21 with 1,500 female remote workers and 1,363 male remote workers.

Asian/Asian-American women also were more likely than women of other ethnicities to say they will have fewer opportunities to collaborate, will work longer hours and miss out on opportunities to form strong work relationships.

White women and women of mixed ethnicity (43 percent and 41 percent, respectively) were more likely to think they will be more productive while working remotely. By contrast, 35 percent of Black women, 28 percent of Asian/Asian-American women and 25 percent of Hispanic/Latina women shared this sentiment.

Women working remotely in IT/finance and insurance/real estate, as well as in professional, scientific and technical services were more likely than those in other industries to say remote work will lessen their networking opportunities.

And more than half of women working in manufacturing were significantly more likely to say their productivity will increase as a remote worker.

Men who work in professional, scientific and technical services (33 percent) were more likely to say they will have fewer networking opportunities as a remote worker than men in construction, utilities, agriculture and mining (15 percent).

“This data makes it clear that all organizations, regardless of size or sophistication, need to re-examine remote-work policies to ensure there are no unintended side effects,” said Trent Burner, vice president of research at SHRM, in the report.

Supervisors Weigh In
Managers and supervisors of remote workers also voiced concerns in a separate survey SHRM conducted in July with 817 respondents, 593 of whom supervise remote workers. Among their responses: