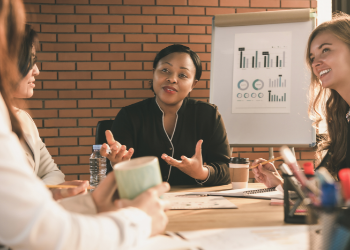 It goes without saying that change comes slowly in higher education, especially for those who seek it. However, the face of its leaders is transforming right before our eyes. At the turn of the new millennium, college presidents, executive administrators, and other high-level leadership roles in higher education were occupied by men. Recent studies show that institutions have become more diverse and made stronger commitments to diversifying personnel across race and gender. More women are assuming top leadership roles as university presidents. Women faculty now represent a majority of the teaching staff and over half of the college education workforce are women. Given the once limited access to leadership for women in higher education, this is a positive trend that underscores the advancement of gender equity within colleges and universities. However, that is not to say prevalent issues that present obstacles to women faculty and administrators do not remain. In particular, there are three critical issues institutions must address to be a safe and supportive environment for women leaders in higher education.

Surprisingly, parental leave policies for faculty and administrators are not universally implemented across colleges and universities, and for women who are also caregivers, the workload expectations and lack of institutional support have proven to be overwhelming. Considering the low percentage of US workplaces that offer paternity leave, institutions without a supportive policy or practice in place disproportionately impact women. In early March, the National Academy of Sciences, Engineering, and Medicine released a report highlighting the impact of COVID-19 on the careers of women in STEM. One of the findings of the report concludes that women were negatively impacted by increased workloads during the pandemic, especially those managing remote instruction and family care responsibilities. “I have three children doing virtual schooling full-time who need my attention throughout the day,” said an associate professor within the report, “they all have different break schedules and seemingly interrupt me every 10 minutes. I want them to learn and thrive.” and I try to make these difficult circumstances for them as positive as possible, which means giving more of myself and my time to them.” This imbalance has adverse effects, whether you are a woman seeking tenure and have not had time to dedicate to research or an administrator juggling the demands of upper-level leadership with caregiving needs. Proactively providing women with the flexibility to take work leave for parenting and caregiving across all higher education institutions is one way to alleviate these challenges.

Parental care and family obligations are only a portion of the issues that create barriers for women faculty and administrators in higher education. In some cases, the traditional structure of the tenure system has been shown to increase the labor women spend on teaching and service at the expense of their research agenda, ultimately influencing their ability to receive tenure at the university. In the 2017-2018 Annual Report on the Economic Status of the Profession, the American Association of University Professors found that despite women making up the majority of adjunct and non-tenure-track teaching positions, only 44 percent are tenure-track and even less (36 percent) have achieved full professorship. Moreover, the American Association of University Women provided additional significance to this finding stating that “Women of color are especially underrepresented in college faculty and staff — which contributes to lack of diversity, equity and inclusion in teaching practices and curriculum as well as role models and support systems for students.” For women administrators, there are also issues and disparities when it comes to pay and promotion. According to a report released by the College and University Professional Association for Human Resources, even though the number of women in executive leadership positions at colleges and universities is increasing, the rate at which they are promoted and paid is lower than white men. Gary A. Berg, the author of “The Rise of Women in Higher Education: How, Why and What’s Next,” spoke to the history of exclusion for women in higher education, emphasizing the influence of institutions on women faculty and administrators. “Many of the elite institutions in the past were resistant to admitting women students…In some cases, the traditions at universities surrounding doctoral programs, tenure, and promotion work against encouraging rapid change in leadership gender, especially at research universities.” To address this issue, he believes that “In addition to creating an open pipeline to top positions, institutions need to more actively encourage and develop women leaders. Over time, one would expect to see college presidencies more appropriately reflect the ever more diverse student population.” .”

Creating a Leadership Pipeline for Women

Another important consideration for women’s equity in higher education leadership is the pipeline itself. Higher education is full of myriad pathways one can take to become a dean or college president for example, but in many cases, this involves jumping between institutions and states for women to advance in their career, and this does not have to be the case. In fact, the American Council on Education found that women leaders often participated in leadership development programs at a higher percentage than men and held immediate prior positions at the institutions where they seek promotion or advancement. This suggests that institutions could leverage these trends and create a structure pipeline and pathway for women to become executive leaders and tenured faculty. In discussion with other women faculty and administrators at Texas A&M University, Dr. Vicki Dobiyanski, associate vice president for student affairs spoke positively about the time her former boss, also a woman, gave her the chance to become dean of students at Florida State University. “She really transformed my career, and I appreciate her seeing something in me,” said Dr. Dobiyanski. These connections and opportunities may exist among women in high leadership roles, but men in leadership must also make it a point to invest in the promotion of women, if not for gender parity, for the progress of diversity, equity, and inclusion that was once inaccessible to women in higher education.

During a Recent interview with HigherEdJobs, Dr. Suzanne Rivera said, “Academia has got to come to grips with its own narrow-minded view of who can be a leader. Things are changing but very slowly.” She could not be more right, and based on these issues, it is fair to say despite concerted efforts towards equity and inclusion for women faculty and administrators, higher education has room for improvement in terms of policies and practices. The fact that women leaders have been able to increase representation in executive leadership and build awareness of gendered disparities in organizational governance and institutional policy does not negate a need to address the longstanding structural issues of colleges and universities. Women have amassed a positive sustainable moment in higher education over the last century, and it would be a shame to stop now because we failed to address the obstacles that impede on their leadership.