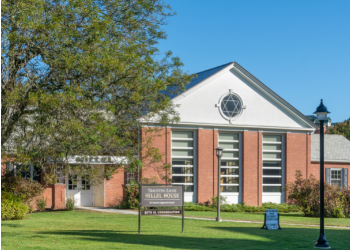 May is Jewish Heritage Month, and unknown to most, the Jewish culture has a long and textured history in higher education. Over 97 years since the first Jewish student organization was created at the University of Pennsylvania, many campuses across the United States have thriving Jewish student centers and organizations that provide awareness and engagement about Jewish history and identity. However, the history of inclusion for Jewish students in higher education was not always welcoming.

To uncover more of this history and speak to the progress of Jewish faith and identity in higher education, I spoke with Rabbi Sue Laikin Silberberg. She attended Indiana University as an undergraduate, where she graduated with a Bachelor of Social Work degree. Rabbi Sue attended the Reconstructionist Rabbinical College and was ordained in 1988. During Rabbinical school, Sue served as the Hillel director at the University of Delaware. In August of 1989, following a year in Israel, Rabbi Sue returned to the United States to become the executive director of the Helene G. Simon Hillel Center at Indiana University.

Cobretti Williams: Looking at the History of Jewish faith and identity in higher education, inclusion on college campuses is very different now. Why do you think that is?

Williams: Are there any notable trends in the treatment and inclusion of Jewish students that you can recall?

Williams: I’m surprised that I haven’t seen more articles about this information.

Rabbi Sue Silberberg: Yeah, it’s been a huge problem. Again, this is not in Indiana. Where I am at, Indiana University, our university recognizes us as a minority group, and the issues of antisemitism have been very, very promptly addressed and it is not tolerated. But on a lot of campuses, that is what has happened in the last five to ten years.

Williams: I think it’s interesting that now we’re kind of at this political hot point where, yes, I think we’ve grown in our understanding of Judaism and the Jewish faith. However, we’re still seeing how different politics and policies, whether they’re in the US or abroad, are still impacting these populations of students. How are universities and organizations like Hillel addressing these incidents?

Rabbi Sue Silberberg: Yeah, I know that there are a lot of fellow campuses that are struggling with it. Again, we have a little bit of an issue but Indiana University is outstanding in terms of its approach to antisemitism and inclusion in general. I think they’re trying very, very hard. There are areas where every university falls very short, especially in the world that we’re living in today. Hillel on most college campuses is struggling with how to support the Jewish students who do face antisemitism on their campuses. Because I think you can be a Jewish college student in the United States and you can never face any kind of antisemitism throughout your college career, or you could get to a university and on the very first day you have somebody who discriminates against you because you ‘re Jewish. The Hillel is really the place on most college campuses where we work with an advocate with the university and work with the students who are facing discrimination.

Williams: So in lieu of that, how can higher education institutions become more aware and inclusive of the various concerns that your students may be having right now and partner more with Hillel as an organization?

Williams: Right. So, to that end, what are some of the strategic priorities for Hillel on your campus moving forward?

Williams: For students, or even staff and faculty, who want to learn more about Judaism and are interested in becoming more involved with Jewish organizations on campus, where would you recommend that they start?

I think the important caveat with that is that for some religious traditions when you say we want you to learn more, it means we’re trying to proselytize you. But in Judaism, it’s against Jewish law to try to convert people to Judaism. So, when we say please come in and learn, we genuinely mean we want to learn about you, and we want you to learn about us. It’s not kind of a bait and switch of we’re trying to convert you to Judaism. We really do a lot to try to educate. At our Hillel at least, we tried to do a lot to educate the campus community about what Judaism is and then also to help Jewish students explore their Judaism further in ways that are meaningful for them.

Williams: I love that.

Rabbi Sue Silberberg: Yeah. At our Hillel, we have about fifteen or so different clubs for Jewish students primarily, but of course, non-Jewish students are welcome. But for Jewish students where they can explore their Judaism in ways that are meaningful to them. We have a club for business students where we bring in businesspeople who are in the business world who can talk to them about what it is like for them. If they’re Jewish and they’re in accounting, they’ll talk about what they do as an accountant, but then they’ll also talk about what it means to them to be a Jewish accountant. Are there issues of antisemitism that they’ve faced? Are there things from their Jewish identity that influence what they do? Those kinds of questions but it’s also, more importantly, it’s an opportunity also for Jewish students to be together and to learn from one another.