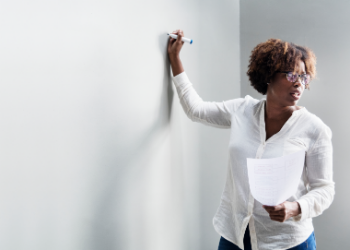 Years later, she continued to be triggered by microaggressions and scrutiny brought forth by colleagues.

“Students of color are and continue to be [traumatized] in some of our graduate programs across the country,” said Tomaneng, who is president of San José City College.

She and other higher education leaders discussed ways to address those toxic environments at the institutional level and offered strategies to recruit more faculty of color during a panel discussion moderated by Dr. Jamal Watson at the Association of American Colleges and Universities’ (AAC&Us) 2021 Virtual Meeting. The panel was sponsored by Diverse.

“Because of these experiences that they’ve had, they are more committed to changing the culture and preparing students of color at their institutions,” he said. “I challenge my colleagues to understand why certain people teach at certain institutions.”

To change the narrative, graduate schools can play a role by mandating implicit bias training sessions for admissions, reevaluating the weight of Graduate Record Examinations (GRE) and providing mentorship opportunities.

In terms of recruitment and retention strategies for faculty of color, institutions should evaluate their descriptions in their job postings. For example, Dr. Leslie D. Gonzales, associate professor in the Department of Educational Administration at Michigan State University, suggested adding land acknowledgment statements.

Job positions can be posted earlier in the academic year, which can also market their commitment to upholding a diverse, equitable and inclusive campus environment, according to Tomaneng. And colleges and universities should consider advertising in targeted publications that will help to yield a diverse pool.

During the hiring process, institutions should also involve an equity officer or advocate “who is knowledgeable in practice in calling out bias as it emerges,” Gonzales said.

“In the context of searches for faculty, we have to be aware of how racial bias, gender bias, class bias, shows up, often masked as bias related to institutional affiliation in association to one’s research methods,” she added.

Dr. Damani White-Lewis, a postdoctoral scholar at the University of Maryland College Park, recommends that institutions reimagine the kinds of positions they are looking for and expand resources available across departments to find interdisciplinary gaps.

The ongoing anti-Black violence exhibited by police officers as well as the exacerbation of racial health inequalities due to COVID-19 has created an influx of positions relating to anti-racism and diversity being introduced at universities and colleges across the country, he said.

However, in this case, higher education was “reactive” instead of “proactive,” according to White-Lewis.

“We always had the capacity to create these kinds of positions,” he said. “In order to do so in the future beyond COVID, we need to realize that the research and teaching gaps in our department aren’t just sort of the outdated ones left by predominately White faculty…But are the kinds of positions that are more focused on racial justice and equity that are pressing concerns today.”

Additionally, rather than perceiving MSIs as “pools for recruitment,” predominately White institutions should develop long-term relationships, according to Gonzales.

Institutions can also look internationally for partnerships and create their own internal pipelines.

“Are we doing things to think outside of the box, to think about diversity differently, holistically?” asked Dr. Tomika Ferguson, an assistant professor and interim assistant dean for student affairs and inclusive excellence at Virginia Commonwealth University.

“And not just racial and ethnic, but also thinking about nationality as well.”

As a way to create more access in the pipeline, institutions can invest in the community by offering younger students summer research programs and job shadowing.

“We have to demystify the pathways to our disciplines early on otherwise we are going to have a really difficult time competing,” said Ferguson. “It’s not that difficult to find [people of color]. Are you cultivating those people to be familiar with you to even consider your discipline? We have to do that work and make that investment and paying it forward in our fields, rather than complaining about the small pool.”