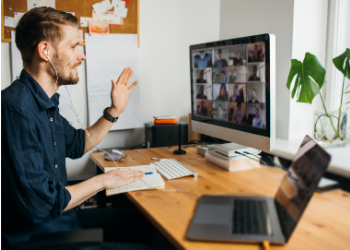 Attending conferences is a crucial part of career development for higher education professionals. Whether you’re presenting your research or introducing yourself to people who will someday offer you a job, your next off-campus business trip might change your career.

But like many professional gatherings in the current pandemic environment, virtually all conferences and workshops have gone virtual.

Professional organizations like the American Psychological Association (APA), are taking what would have happened in three days at a convention center and moving their sessions online, available live and/or recorded to watch for a limited time.

“I think hybrid conventions are the future (with a blend on in-person and online programming) because you can take advantage of so many things with the virtual platform that you can’t take advantage of when you’re just in the room, ” said Alicia Aebersold, chief communications officer of APA.

Online chats during keynotes or real-time audience polls and question submissions for presenters help democratize the Q&A experience. They prevent one or two people from asking all the questions, especially when preceded by a long comment that is more public posturing than an inquiry. Randomly assigned breakout rooms also better involve introverts and split up any cliques. Another benefit is easier access for graduate students and professionals who would not otherwise have the opportunity because of time and travel budget constraints.

APA typically attracts 12,000 people to its annual convention, but when the event was switched to online just three months in advance, nearly 15,000 people registered and “attended” sessions in the first month. APA offers discounts up to 85 percent off the normal in-person costs.

Conference organizers still have considerable expenses: virtual conference hosting services can range from $30,000 to $250,000 just to offer the bandwidth and storage capacity for live and recorded sessions, while also simulating a face-to-face environment with virtual exhibit halls, happy hours, and other networking opportunities.

More than 7,000 student affairs professionals attend the annually NASPA Annual Conferencebut organizers had just two weeks to adapt to virtual alternatives for 2020 and seven months to prepare for 2021.

The challenge for organizers is to meet the needs of attendees. For academic conferences, especially for disciplines like computer science that use the proceedings at peer-reviewed conferences instead of journal submissions, the opportunity to present research is incredibly important. For other conferences, like NASPA, networking is paramount.

“Even though we put a lot of effort into educational sessions and keynotes, people invariably rate networking as the highest part of the meeting experience. That immediately creates a challenge from a planning standpoint but also for the participants. How do you replicate, or at at least create new opportunities, that form that kind of engagement in a virtual space?” said Kevin Kruger, president and CEO of NASPA.

Allison Pugh, sociology professor at the University of Virginia, is currently working on a book about person-to-person work, technology, and the stratification of human contact. A regular attendee of the American Sociological Association’s Annual Meeting, Pugh was surprised by some of the benefits from the last Annual Meeting, such as the chat-room functionality and the intimacy and immediacy of having faces staring back at her on the screen, but she said the networking aspect could not be replicated.

“Most of the interactions at conferences are when you’re walking down the hallway and you see somebody and you start asking questions about how they’re doing or about their work and if they want to get a coffee,” Pugh said. “That kind of networking is now gone and all we have left is to email people and it’s just not as good. Email or setting up a one-on-one Zoom call is more of a colder, drier ask.”

“Everyone craves the hallway conversations and sense of reunion they feel with in-person conversations,” said Dave Lutz, managing director of Velvet Chainsaw Consulting, whose firm works with academic conferences. “While many have tried to replicate it with happy hours, birds of a feather conversations, etc., that void still exists.”

Lutz added that association conferences will likely adapt by having fewer sessions and shorter days because participants aren’t willing to invest more than an hour or two for more than two days.

“Just because it’s online, doesn’t mean it’s not actually happening, even though there’s this enormous, diverse intellectual activity going on,” Pugh said. “It didn’t feel like a normal conference, which is usually a very intense (two or three days) that’s exhilarating and exhausting at the same time. Because I was at home, I didn’t process that I was at ASA until the third day.”

Here are seven tips to get the most out of a virtual conference experience: