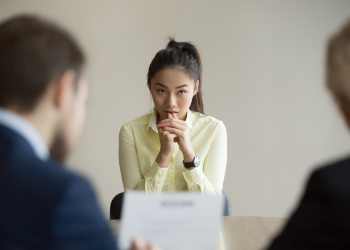 There was a sketch comedy show in the 1980s called “You Can’t Do That on Television” where cast members had green slime poured over their heads whenever they said the words “I don’t know.” As if appearing on a show called “You Can’t Do That in a Job Interview,” candidates are often afraid of the metaphoric slime that comes with revealing that they don’t know the answer to a question.

If the COVID-19 pandemic has taught us anything, there are a lot of questions we can’t possibly know the answer to, no matter how well prepared we are. But the stakes are high in job interviews. Careers are on the line. And no one wants to be exposed as anything but the expert, or authority figure, they portray themselves to be in their application materials.

How you respond to the questions you don’t know the answers to can be as important as nailing the responses to questions you were prepared to be asked.

Here are steps to take when responding to interview questions that have you stumped:

Take a moment to let the question sink in. According to researchers, the typical gap between a conversation is 200 milliseconds long, but it takes our brains 600 milliseconds to retrieve a single word from memory. People are conditioned to stop listening and start thinking of a response even before the question is completed. Give yourself some time, at least a second, to process what’s being asked. The pause will at least let the interviewer know that you’re thoughtful and listening intently to what they are asking.

Allow yourself to say the words “I don’t know.” Saying these words will remove the fear, which, from a physiological perspective, will open your mind from the fight, flight, freeze response. You might not have all the answers, but you’re not going to get slimed either. If there’s any shame in saying “I don’t know,” it’s when you don’t elaborate with a “but…” or if you don’t ask “Can you explain the question further?”

Buy yourself some time. You might legitimately need the interviewer to explain the question further or you could use this question to give yourself a moment to collect your thoughts for a response. Try prefacing a response with “Hmm, you asked a really good question; let me think about this for a moment.” Your interviewer might even be so caught up basking in the great question she asked that she might not even notice the brief pause you took to gather your thoughts.

Show off your critical thinking skills. Not knowing the answer can be an opportunity to exhibit how you go about solving problems. Talk through the question out loud. If you have prepared, by researching the institution, you can name the people, functional areas, data, and other resources at the institution that you would use to find answers and describe your approach to collaborating. You might respond by saying something like, “I don’t know the answer, but here’s what I would do to find out…”

Show off what you do know. Use a similar “I don’t know, but” response and segue into an example of a time when you solved a problem that’s not exactly what they were asking but similar enough to pass as an answer. This is not ideal but it’s a tactic used by politicians to divert the conversation to something they’d rather talk about.

Show off your humility. Be honest. Don’t fake it. Sometimes people are more impressed by your ability to know what you don’t know. If it’s a skill or experience that you lack, explain how quickly and eager you are to learn. Use an example from a previous job where you corrected one of your failures or filled a skills gap, and then describe how the employer benefited by how you responded. Your body language is also telling. If you look like a sous-chef who just misplaced the most important seasoning in the kitchen, the interviewers will share your grave concern. There’s always another ingredient that will do. Also, it’s better for everyone that the hiring committee knows what you don’t know in the interview than after you are hired.

Reframe the shame. Not knowing the answer is embarrassing. No one wants to be immediately disqualified for the job. According to a 2006 study by Brent Weiss and Robert Feldman, 81% of people lie during job interviews. Instead of thinking of a job interview as hiring committees sleuthing out candidates’ flaws with a “gotcha” moment, think of your interview as the Q&A portion of a presentation you’re making at a conference. In this context, where the topic is the institution’s needs and not your candidacy, try reframing your emotions away from fear, shame, or embarrassment. Amy Boone of Ethos3, a presentation design and training firm, recommends expressing feelings of gratitude for your audience’s interest, curiosity about something you hadn’t thought about previously, challenge to expand your knowledge, or inspiration by your audience’s passion towards a topic.

Follow up later. When all else fails, just admit that you don’t know the answer, but use your shortcoming as an opportunity to reach back out to the hiring committee after the interview. Answer the question in an email or thank-you letter. Show them your earnestness. You can even say that you will follow up at the time the question is asked with something like, “That’s a really good question that I don’t know the answer to, but it deserves further thought and I will get back to you.” This is an especially useful tactic if you don’t know or forget the answer to a factual question, such as what was the name of the department chair at a previous institution where you worked.

Don’t dismiss your unanswered or unanswerable questions as if they are points left off a scoreboard. They matter to the employer. Consider them as opportunities to open your mind and not close it because of a fear of getting slimed.