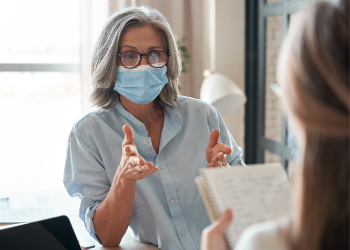 The election and its aftermath provide ample opportunities for arguments to arise at work. There is no shortage of opinions and of people willing to share them — welcome or not. Although often civil, they aren’t always, and we can find ourselves feeling trapped, imposed upon, or on the wrong end of someone’s anger and hostility (or worse).

What do we do when confronted by others wanting to argue about politics and other controversial issues, especially when walking away — or in today’s Zoom world “leave meeting” — isn’t always feasible? What do we do if we must work with such individuals, maintain respect despite their opinions, or simply suffer them? How can we shift to respectful conversation? How do we politely exit when we don’t wish to engage?

In Arguing with peopleMichael A. Gilbert writes that arguments generally end in one of three ways.1Resolution occurs “when one of two alternatives [in dispute] has been accepted as correct by both disputants.” Settlement occurs when disputants “agree to settle on one answer for a variety of reasons,” though, unlike resolution, they “do not have enough faith in the result to call it the truth.” Suspension occurs when one party simply ends the conversation by walking away, having an emotional response that ends discussion, claiming to have another appointment, or taking similar action. Suspension can be positive, as delaying the argument to pick up later “can allow information to sink in, feelings to settle down, and more information and perspectives to enter.”

When talking about political and other controversial topics at work, suspension will more often than not be the most likely outcome. We must then decide whether to have the conversation or foreclose conversation now and in the future. Let’s examine strategies for both:

Perhaps you are okay with engaging in the argument, though in a respectful, civil way. While you may not always welcome the argument, perhaps it serves as a means for maintaining your relationship. Whatever your reasons, consider:

Ground rules. Joseph Grennyco-author of Crucial Conversations: Tools for Talking When Stakes are High and co-founder of VitalSmarts®, refers to this as “setting the table.” When someone seeks to talk with you about an issue about which there will be disagreement, suggest ground rules, such as ensuring equal time and allowing each to ask the other questions about your respective positions. Grenny says setting the table this way helps avoid a “food fight.”

Inquiry rather than persuasion. Gilbert discusses three kinds of argument: inquiry dialogue, negotiation, and persuasion dialogue.2 The object of inquiry is truth, of negotiation to obtain a mutually advantageous agreement, and persuasion “to instill a belief in someone.” When inclined towards inquiry rather than persuasion, we have no “pre-conceived result to which”. [we] are committed, no ego investment in the result, no advantage to be gained by one answer being deemed correct.” Inquiry also involves “turn-taking,” reliance on agreed-upon procedures, backing assertions with data and concrete observations, and other hallmarks. of authentic dialogue. Gilbert acknowledges that “pure dialogue” rarely happens. Yet, when we accept that discussion on politically charged topics rarely results in “instilling a belief in someone,” we can create space for richer discourse and understanding.

Creating safety. When confronted with strong emotions, such as on racial injustice and inequality, Maria Moss, also of VitalSmarts®, encourages “having the capacity to give the other person the benefit of the doubt.” Ask yourself why a “reasonable, rational and decent person” would say or believe what he or she does. There is “license” in such conversations to have “strong emotion” and “understanding and lack of understanding because of your experiences.” By not assuming ill intent and giving the benefit of the doubt, we can move conversations towards greater safety to increase understanding “on both sides of the equation.”

Opportunities for learning. Some people will confront you with messages you find offensive or even bigoted and dogmatic. They won’t persuade you anyway, so consider turning the conversation into an opportunity for influence and learning. Moss Notes blues musician Daryl Davis and his efforts to befriend KKK members and engage in listening and logical reasoning about their perspectives, which led many to leave the Klan. Our encounters may not be so extreme, but Moss encourages a level of listening where we consider our true motives about what we are trying to understand about the other person, keep our emotions and feelings in check, and allow the other person to vent and give. voice to their perspectives. Many in argument mode often expect a lack of empathy, so when they receive it, it may be the beginning of a process that allows them to self-reflect on their behaviors, attitudes, and viewpoints.

Exiting the argument may be your best option when empathy and true conversation aren’t possible. Perhaps the other’s behavior is uncivil, too forceful, hostile, or simply unsafe — emotionally or perhaps even physically. Or perhaps you simply have other priorities. Consider these approaches:

Whether you engage, or not, with someone who wishes to argue with you, the essential message is to turn the argument into a conversation and/or avoid arguing altogether.