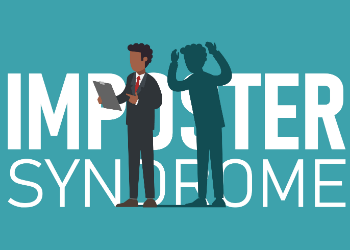 Higher education professionals aren’t immune to impostor syndrome, the term used to describe one’s persistent doubt that their success is deserved or has been legitimately achieved as a result of their own efforts or skills. In other words, the fear of being exposed as a phony, particularly at their job.

Even though an estimated 70 percent of the population has experienced impostor syndrome at one point or another, it’s easy for people in academia to look around at all their brilliant, hard-working colleagues and assume that the only one who doesn’t belong is in the mirror. You might think your coworkers were once impostors, too, but then they earned a doctoral degree or that promotion. You think you’re different: you are still the fraud.

According to Valerie Young, an author and leading expert about impostor syndrome, the higher up you climb in your career the more susceptible you are to this condition, so it’s actually even more likely that higher education professionals think of themselves as impostors. And the way you, the expert at the lectern, are viewed by students only makes your impostor syndrome worse.

But still, impostor syndrome decreases your confidence. It holds you back from doing your best work or impressing a hiring committee when it comes time to advance your career. So how do you get rid of it?

Step #1: Admit your syndrome, but don’t embrace it.
Acknowledging that you have impostor syndrome is an important step. You don’t want to live in denial. But don’t let impostorism become part of your identity. Maybe you’re not lamenting your inadequacies in the faculty lounge, but when someone outside your department says, “Oh, you’re the expert,” don’t refute it in your mind or verbally, even in an aw-shucks, self -deprecating manner.

“Giving voice to these irrational feelings of inadequacy is important; that’s why talking about impostor feelings is an essential first step,” Young wrote on her blog at ImpostorSyndrome.com. “(But) endlessly talking about your impostorism will do little to boost your confidence — at least in any lasting way. Just don’t get stuck here. Simply said, you can’t share your way out of impostor syndrome.”

Step #2: Accept feedback as a gift.
Many psychologists recommend changing negative self-talk to fight impostor syndrome with affirmations and mantras such as “You can do it,” “You deserve to be here,” and “You got this.” Shouting down your inner impostor might have some cumulative effect, but you need to change your thinking. Young recommends thinking like non-impostors, who, in her observations, perceive three things differently: competence, failure, and fear.

Competence is a separate area and Young has identified five competency types, but failure and fear are more closely related to how people react to feedback. Higher education professionals might be afraid of criticism from a student, a supervisor, or senior faculty. The same goes for failure, like being rejected for a job, promotion, manuscript submission, or grant proposal. Or maybe it’s how you feel when talking to someone that triggers negative self-talk that says, “I hope I’m not found out to be a total fraud.”

This is all feedback, or data points for analyzing how to get better, and not an assault on your ego. Replace fear with curiosity: Why am I feeling this way? What evidence is there that I’m really that bad? What can I learn from this rejection? What can I do better?

“Instead of being crushed by even constructive criticism, seeing it as proof of their supposed ineptitude, non-impostors see feedback as the gift that it is,” Young said. “So much so that they actively seek it out because they know it’s the only way to get better.”

Step #3: Consider yourself a work in progress.
Another reason why impostor syndrome afflicts higher education professionals is that there are so many thresholds and credentials along their career paths. You might try to match your competence with what you attained: a Ph.D., tenure, or a promotion to full professor or vice president. Your CV might tell you that you’ve made it — you should now be a finished product — but if you have impostor syndrome or if you’re a perfectionist, in your mind you’ll never measure up to these standards.

Once you come to terms with not having to know everything, the more you will adopt non-impostor thinking. Always trying to prove that you belong to your level of career attainment is no way to live. Focus instead on continuous growth into the person you will become, and not comparing yourself to more articulate colleagues or some ideal image you have of a professor or administrator.

“Just like (those who have impostor syndrome), non-impostors are driven to constantly improve,” Young said. “But not out of the fear of being found out — but rather because they see themselves as a constant work in progress.”