by Mark S. Rosentraub, from 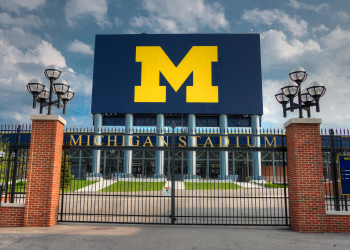 Editor’s note: Despite concerns about COVID-19, Big Ten college football is set to begin Oct. 24. Here, Mark Rosentraub, a professor of sports managementaddresses some of the benefits and potential drawbacks of playing football too soon.

How much of this decision is related to revenue?
From my perspective, it is largely driven by revenue. The university presidents and provosts effectively lost control of football and basketball when they let college coaches be paid salaries that rival those offered to those in the NFL and NBA. Jim Harbaugh is paid US$7.5 million a year to coach the University of Michigan football team, although his pay was cut by 10% — dropping him down to $6.75 million for this season — as part of the university’s efforts to cut costs amid the COVID-19 pandemic. Before the cut, Harbaugh had been the third-highest-paid college football coach in the nation.

Harbaugh’s defensive coordinator, Don Brown, is paid $1 million a year. Two other assistant coaches also have million-dollar salaries; and five assistant coaches are paid at least $500,000. Michigan’s athletic director is paid more than $900,000 each year. Michigan Athletics is responsible for all of its expenses, and for the past several years revenues have exceeded expenses. Just like the rest of the university, Michigan Athletics will have to consider changes to cover any deficits. If the games are played, there will be significant media income to help offset any deficit.

In addition, to sustain the image of college sports and to comply with Title IX requirements, federal rules that prohibit discrimination on the basis of sex in education or programs that get federal funding, campuses must finance a number of non-revenue-generating teams such as track, rowing, tennis, softball, baseball, lacrosse and the like. Together, those sports offer opportunities for a larger number of student-athletes. Those teams, however, must be financed, too, and with few paying fans at their games and matches, revenue from football and men’s basketball essentially pays for those teams.

Consider, for instance, what took place at Stanford University this year. Faced with the loss of football and basketball revenues, Stanford University terminated 11 teams in July. Other universities are likely to have to make similarly difficult choices that will impact many students because football and men’s basketball games are not played or they will be played without paying fans.

Why are administrators saying it is OK to bring back football players but not other students?
From my perspective, this is sheer hypocrisy because to protect athletes they must be treated differently than other students. There are 1,036 students on the 74-player rosters of Big Ten football teams. Contrary to what the name suggests, a total of 14 universities play in the Big Ten conference. They will be tested for COVID-19 and, if necessary, isolated, treated and protected in a way that is not being offered to other students.

In addition, the University of Michigan, the Big Ten school where I teach sports management, believes it is best to send all students home on Nov. 20 to complete the semester. However, football games will be played through Dec. 19, and basketball will start Thanksgiving weekend, after other students are sent home. I see no justification for treating most students differently from student-athletes, but that is what is going to take place.

What are the pros and cons for players?
There are two benefits for the students who play.

First, for the vast majority who will not play at the professional level, this season could be their last chance to enjoy what they love. For that reason alone there is merit in finding the safest way to have the games played.

Second, for the few who have a shot at being drafted by the pro leagues, this season could be their best chance to showcase their skills. The risk for these benefits is exposure to COVID-19 from close contact for which they are not properly compensated. Professional athletes were represented by unions that could work to secure appropriate compensation for their willingness to play. And if they decided not to play, they, too, were financially protected, as when the NFL agreed to offer as much as $350,000 in salary to a player if he or his immediate family had an underlying condition.

Are there any red flags that the fall schedule won’t work?
Several games have already been postponed. With more leagues and schools prepared to launch their seasons, the earlier warning signs are emerging that more postponements or cancellations are on the horizon.

Universities do not make it easy to know how many student-athletes have tested positive for COVID-19. Universities like Michigan report the total number of students, including athletes, who test positive. For each of the first two weeks of September 2020, more than 40 students on the Ann Arbor campus tested positive. The New York Times tracks the number of college students testing positive but does not report how many of these students are athletes.

Several states now do not allow fans to attend games, and some do. That creates another strange situation. As of late September, fans will not be allowed at Michigan’s football games. Also, fans are not expected at Ohio State’s home gamesbut that could change.

Is there a possible alternative?
Universities need more time to make their campuses safe for all students, faculty and staff. For other students to attend games, the nation would need to be closer to the reality of a vaccine. Some observers and athletics officials have discussed whether the games can be played in 2021 instead.

But I see several problems with playing the 2020 season in the winter of 2021. First, playing in winter 2021 would lead there to be two seasons in one calendar year, which could stress players’ bodies. Plus, the season could conflict with the NFL’s planned April 2021 draft. These issues will have to be addressed, especially if the NFL agrees to postpone its draft until May.

Starting the season in 2021 would give the universities more time to protect all students, staff and faculty through aggressive testing, tracking and appropriate quarantine procedures. With those improvements in place, athletes would have more of the opportunities they deserve while universities could do a better job of striving to protect every student.