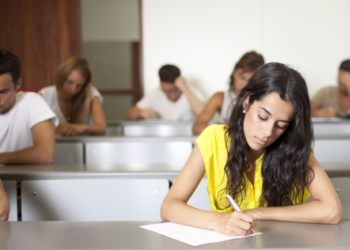 In several of my blog posts as Author in Residence for HigherEdJobs, I have referred to “white normative standards.” In this final post, I want to briefly define what I mean by white normative standards, and remind us that we will not achieve racial justice in higher education if we allow white normativity to remain intact, as it transcends our curriculum, co-curricular programming, hiring practicesand mission.

The founding of colleges and universities in the United States pre-dates the founding of the nation itself, with Harvard College being established 140 years before the signing of the Declaration of Independence. As British settlers founded a new nation — one on the stolen land of indigenous peoples — they established essential institutions including churches, government offices, and colleges. With the establishment of colleges based on the British (Cambridge) model, they solidified an ideological foundation grounded in the false superiority of races, with a belief that (white) Europeans were superior to enslaved (black) Africans and Native Americans. This laid the foundation for white normativity in postsecondary education.

From the founding of Harvard College to the establishment of colleges as recently as 2012, whiteness has been solidified and remains intact. Postsecondary institutions founded on principles of whiteness continue to value whiteness. As noted by Cabrera, Franklin, & Watson, (2017), whiteness in the United States is not about white people or the superiority of white people, but rather about whiteness as normal. They state that whiteness in higher education includes a commitment to color-neutrality, or the idea that race doesn’t lead to racial inequities, white epistemologies, or the valuing of white knowledge, and whiteness as property, or the privileges that whiteness has to space, status, and overall practices within the institution. This means that anything non-white is considered abnormal, and in many cases assumed to be inferior, bad, inadequate, and simply deficient.

Whiteness as normal within US institutions of higher education stems from the history and development of colleges and universities, which have always been accessible to white people, and mostly exclusionary to people of color. Historically Black Colleges and Universities (HBCUs), for example, emerged in the late nineteenth century following the US Civil War and parallel to the materialization of Jim Crow laws, which made it legally acceptable to develop “separate but equal” institutions and facilities for Black people Yet history reveals that separate was never equal, and in fact, HBCUs were denied adequate resources, support, and faculty to sufficiently educate formerly enslaved people and their descendants. Meanwhile, during the early twentieth century, institutions such as Harvard, Yale, Princeton, University of Chicago, Stanford University, and Johns Hopkins University, which were predominantly white because of their exclusionary practices, became some of the greatest research universities in the United States. , laying the foundation for the stratification of postsecondary landscape, which too is grounded in whiteness.

As argued by higher education scholars Alexander Astin, the stratification of the system was largely based on a socially constructed value for “smartness,” including smartness of students, as determined by SAT/ACT scores, and smartness of faculty, as determined by the number of research grants and publications obtained. These measures are “white normative” because they center whiteness. For example, standardized tests have historically discriminated against students of color, with white students regularly outperforming students of color, not because white students are smarter, but because structural inequities have led to inequitable outcomes by race. Moreover, faculty of color in academia have struggled to be legitimized, with their scholarship and research endeavors continually undervalued. Moreover, they have experienced discrimination in the hiring and tenure process, and they are often tokenized and isolated within their institutions. Within a postsecondary system that values ​​whiteness, students and faculty of color and their contributions to the institution are simply not valued.

In the book “Becoming Hispanic-Serving Institutions: Opportunities for Colleges and Universities,” I argue that colleges and universities that meet the federal designation to become Hispanic-Serving Institutions (HSIs, colleges and universities that enroll at least 25 percent Latinx students and 50 percent low income) are racialized as organizations of color and assumed to be inherently inferior to white institutions. White institutions are typically called “predominantly white institutions” which is simply a reference to the student population, which is predominantly white, with little recognition of the structures, including the mission and purpose, the policies and decision making, the curricular and co-curricular structures, and the leadership and administration, that are committed to, value, and uphold whiteness.

In many ways, these structures are seemingly race-neutral, meaning that one could argue that there is no racial value embedded within these structures. Yet in a society where whiteness is normal, whiteness is unconsciously valued. Within institutions of higher education, whiteness is validated across the entire curriculum (although Ethnic Studies is an exception) and within classrooms, with white knowledge and white ideologies shared with all students, often with little resistance. Furthermore, white voices, white histories, and white legacies are authenticated across campus. This has become evident as campuses across the country deal with the contentious nature of discussions that evolve around the removal of statues of confederate “heroes” and owners of enslaved people on college campuses. Students of color are often loud and clear with their demands to have these artifacts removed, as they evoke a sense of fear and an unwelcoming environment, while those who support these statues argue that they represent an important piece of history, with little recognition of the legacy of racism and white supremacy that these artifacts represent.

As we continue to see a shift in the racial composition of students on college and university campuses, and with a conscious movement towards racial justice, there must be an intentional effort to disrupt and challenge white normative standards. As long as whiteness remains intact, people of color will continue to feel unwelcomed, undervalued, unappreciated, and unseen, and their contributions to knowledge and practice will continue to be invisible. Now is the time for transformation within institutions of higher education. Now is the time to acknowledge, discuss, address, and disrupt white normativity within higher education.