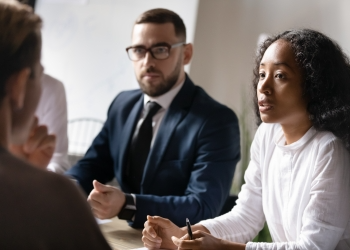 I have facilitated numerous mediation and dialogue processes where individuals struggled to communicate and understand one another due to confusion about what each person meant when they used a particular term, provided a label to describe a behavior, or sought to identify how someone’s words and actions embodied a broader, and often negative, idea or concept. Their struggle to find clarity on terms served only to deepen their misunderstanding.

Examples include matters as seemingly innocuous as describing a shade of blue (“royal” or “navy”?) and how someone dresses (“a little too relaxed” or “business casual”?) to much more serious matters: 1) An employee describes her manager’s behavior as “micromanaging” while the manager says he’s just being “thorough” and “supportive.”; 2) A white person understands “micro-aggressions” to apply to what women and minorities experience broadly while a black person understands the term to apply to what people of color experience based on race alone. This leads to conflict when the first claims the second of engaging in such behavior.; 3) A heated conversation among students in class ensues when some white students claim anyone can be racist while a few students of color claim only whites can be truly racist.

Other examples include struggles to come to terms on words like “privilege,” “bully,” “harassing,” and “homophobe.” It also includes labels prefaced with “anti-” and “pro-.” Is a pro-choice advocate “anti-life?” Is a gun-rights advocate “pro-violence” and gun-control advocate “anti-freedom?”

We may never rectify this confusion for speakers who intentionally use certain terms and labels to accuse, create walls of separation, and advance personal and political agendas. No efforts to clarify the meaning of words will satisfy deeply entrenched factions. But for the rest of us who genuinely want to understand one another, I offer suggestions that may allow you to come to terms during difficult conversations:

If you must use a label or term that is likely to cause a reaction, lead up to it by first describing the facts, observations, and experiences that give it context. If I were mediating the situation where an employee claims her supervisor is “micromanaging,” I would request that she describe specific behaviors that lead her to draw this conclusion. If expressing a particular term is important to you, begin with facts and observations that lead you to make the assertion. This lead-up will provide concrete information to which the other person may respond rather than having to defend against a bald accusation.

Decide how important using the term or label is compared to simply describing your concern or feeling without it. In the second example, the conversation about what is or isn’t a “micro-aggression” could lead to, at best, a semantics argument and, at worst, an angry and offensive debate, neither of which will lead to understanding. This is not to minimize the particular nature of “micro-aggressions” and how and why women, people of color, and others from marginalized groups feel dismissed and discounted by such behaviors. Nevertheless, what generally underlies such concerns are the subtle slights and non-verbal behaviors that cause someone to feel dismissed and discounted. Wouldn’t it be better to focus on these particular concerns and provide concrete examples rather than worry about the term put to it? Consider reframing such discussions away from what to call something and towards the true concerns as exhibited by actions and behaviors.

If using a term or label is important, spend time understanding how conversation participants interpret its use before attempting to explore whether a common understanding is possible. There are, of course, times when we shouldn’t shy away from a term or label because doing so waters down its importance. “Racist” and “racism” are prime examples. Without the proper context and preparation, conversations on highly charged issues quickly become unproductive, which is why many avoid them. If we truly want such conversations, a good start is to learn how people in the conversation understand key terms used.

Many individuals, for example, do not understand the meaning of “racism” beyond a common definition that it is “prejudice, discrimination, or antagonism directed against someone of a different race based on the belief that one’s own race is superior.” They then react to others who claim that being “racist” in America is something that whites alone can be. Others explain this view more objectively, relying on sound theory such as critical race theory, which takes the view that race is socially constructed and “functions as a means to maintain the interests of the white population that constructed it.” Racism is systemic and associated with who holds the power. Still, other arguments suggest that in our society today its meaning extends beyond common understandings to encompass a more subjective meaning as “that which is offensive, for any reason, to people of a race.” Still another argument is to consider “‘racist’ not as a pejorative but as a simple, widely encompassing term of description.” Minimizing charged meanings around the term may help others understand how their behaviors and actions may be racist as a means of combating racism.

I’m not advocating for one meaning over any other. Rather, where terms and definitions matter, chances are good that people will disagree, spending time to understand how they view and interpret such terms is an essential precursor to holding a meaningful conversation. It may, in fact, be the only hope for such conversations.

Be as fair as possible in the terms and labels that you do use. Calling a pro-choice advocate “anti-life” is a cheap shot, as are calling a gun-rights advocate “pro-violence” or gun-control advocate “anti-freedom.” We can spin words to emphasize the positive in our side and the negative in the other’s side. If that is your approach, you’re looking for a fight, not a meaningful conversation. Even terms like “gun rights” and “gun control” can be problematic, but are at least generally accepted among respective advocates. If we must recognize such terms in conversation, we must be careful not to allow them to totally define individuals who identify with them. With careful framing, we will often find these terms don’t fully encompass their belief systems. Are there not gun-rights advocates who don’t believe in wholesale access to guns? Are there not gun-control advocates who want to preserve the Second Amendment even if they want it to be interpreted differently? We may find common ground if we can get beyond the labels.

Use renewed clarity to understand where people are coming from. We will still disagree on issues of high importance. But with clarity of meaning comes a basis for understanding how and why people believe as they do when discussing the terms and labels in question. It will enrich our discourse and help us navigate conversations more productively. We may at times even find common ground.