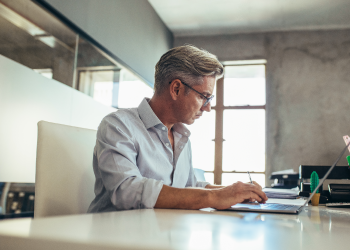 Higher education professionals aren’t like major league baseball players when it comes to career longevity. The coronavirus pandemic has sidelined ballplayers who only have a couple prime years in their mid- to late-20s to maximize their physical abilities and earning potential before their skills decline.

A semester outside the classroom, laboratory, or office shouldn’t affect knowledge workers, right? Surely their intelligence can be stretched decades longer, regardless of their talents being squandered — or maybe sharpened — by a season of online teaching and/or remote working.

Well, higher education professionals might be returning to campus with less zip on their fastball than they would like to think. Many experts estimate that intellectual ability starts to decline in our late-30s and early-40s.

No kidding. Life comes at you fast.

Career decline is detected in everyone from typists to air traffic controllers, the latter having a mandatory retirement at age 56. Researchers at Simon Fraser University have even found that the cognitive abilities of video-game players begin diminishing at age 24.

Higher education professionals, especially professors in disciplines requiring a large store of fixed knowledge, have a longer career arc, according to Arthur C. Brooks, professor of the practice of public leadership at the Harvard Kennedy School. Brooks authored an excellent piece for The Atlantic last year titled “Your Professional Decline Is Coming (Much) Sooner Than You Think.”

In his essay, Brooks references the concept of fluid and crystallized intelligence, introduced nearly 80 years ago by British psychologist Raymond Cattell. Fluid intelligence is the ability to reason, analyze, and solve novel problems, or what Brooks referred to as “raw intellectual horsepower.” Think of the quick decision-making abilities used by video gamers. Crystallized intelligence, on the other hand, is the ability to use knowledge gained in the past. Think of people who solve problems by synthesizing their acquired experience and knowledge.

“Everybody falls at their game at some particular point,” Brooks told Adam Grant as a guest on Grant’s The WorkLife podcast. “(…) you should be making plans in your 40s to how you can be the best creator with your crystallized intelligence.”

For higher education professionals, or even workers in other industries, that could mean a switch to or greater emphasis on teaching instead of conducting cutting-edge research or producing your career’s magnum opus.

Grant, an organizational psychologist, pushes back on Brooks’ suggestion that people become inherently less creative later in their careers. An acclaimed author and professor at the Wharton School of the University of Pennsylvania, Grant said that as people’s careers advance, they just produce less.

“I don’t think it’s ability, I think it’s motivation that’s dropping,” Grant rebutted. “I think a lot of people become complacent and they feel like they achieved enough success so they may scale back a little bit. It may be that priorities outside of work become more important to them, and if we can maintain that motivation, there’s no inherent reason why the quality of output would decline.”

From Brooks’ point of view, maintaining peak-level performance or even getting by on fluid intelligence is just not sustainable for an entire career. To be productive and successful, people should stop trying to innovate later in their careers and instead concentrate on sharing their knowledge as synthesizers, teachers, mentors, and managers.

Whether you believe that it’s your motivation that’s lacking or your fluid intelligence that is waning, it’s important to simply be aware that career decline can exist. It’s easy for baseball players or typists to recognize this because their skills are measured more precisely with statistical outcomes.

Success can come by completely reinventing yourself, like a pitcher who develops a curveball or better control later in his career because his fastball has lost velocity. Or maybe it’s relying on instincts, like typists whose fingers have slowed down with age but can still reach the desired speed because they’re sensitive to keystrokes further in advance than younger typists.

The point is knowing if your feet are on an incline and that you’re making upward progress in your career. There’s more than one way to achieve success. Explore unfamiliar domains to inform your research. Try a different teaching style. Adapt to new technology to reach students. Allow your crystallized intelligence to shine where it is most appreciated.

Aging is inevitable but you have choices in your career to reach new heights.