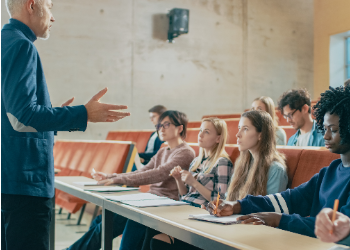 Editor’s Note: We understand that the world we live in currently is a very different place compared to the period discussed in this report. As this analysis was just recently finalized, we had a certain amount of pause in publishing the findings as we know the COVID-19 pandemic has changed academic job postings, the employment landscape, and the overall higher education job market. However, we feel providing you with a glimpse of the market from the past five years can give knowledge of where we’ve been and give hope as we forge ahead in a new normal in the world of higher education.

Introduction
This article will review Integrated Postsecondary Educational System (IPEDS) survey data from 2014 through 2018, and supplement that with 2019 job postings from HigherEdJobs.com (HEJ), to paint a picture of an industry that has undergone subtle but noticeable shifts in instructional and administrative staffing even as its overall size has remained relatively static.

The 50,000-Foot View
Of the 6,668 institutions who responded to the 2018 IPEDS survey, 6,392 provided employment data, reporting over 3.6m employees at postsecondary institutions, nearly all of them within the traditional nonprofit sector: nearly 2/3’s (2.3m) of employees were reported by public institutions, while another 32% (581K) were employed by private non-profits nearly; for-profits reported only 158K staff. (Fig. 1) That overall number of 3.6m represented a decline of 4% from 2014, but that decline was not evenly distributed; in fact, part-time staff saw a 17% decline in staffing, while full-time staffing increased slightly from 2.57m to 2.62m over this time period, at a fairly consistent rate (between 3% and 5%) among non-profits. 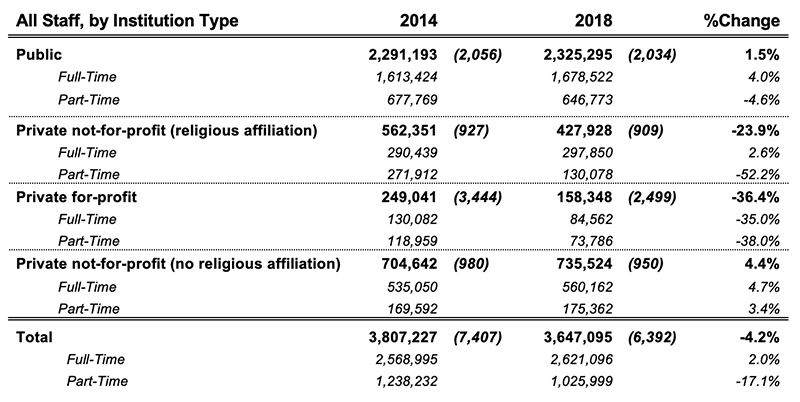 Overall full-time employment increased only slightly in this period, and from the beginning to the end of the period both staffing and schools remained more heavily concentrated in the eastern US, specifically the Southeast and the Mid-East (Mid-Atlantic). Only the Far West and Rocky Mountain showed growth at a rate noticeably greater than other regions. (Fig. 2)

A separate portion of the IPEDS survey gathers data on full-time new hires — staff who, as of the fall, are new to the institution from the previous year, whether taking net-new positions or backfilling existing positions. This data shows a sharp acceleration in hiring rate in the period covered. Specifically, the number of new full-time staff more than doubled at public institutions and tripled at private non-profits, with an increase in annual hiring from 110,413 (2014) to 285,592 (2018).

Finally, even at this high level, the shape of employment data on the for-profit segment stands out: despite representing 39% (2,499) of responding institutions, for-profits reported only 4% of the total staff. Both the number of respondents, and total employees, declined sharply since 2014, reflecting the overall contraction that has been observed in the for-profit industry.

Interestingly enough, the drop in part-time instructors was fueled by a particular pocket of data: a sizable portion (~69%) of the decline in part-time numbers was in the category of “Instructional staff, Faculty/tenure status not applicable, nondegree-granting institutions” and was concentrated overwhelmingly in non-profits with religious affiliations in the Southeast. (Fig. 4) When that category is omitted, that data shows a much smaller decline (~5%) in part-time instructional positions between 2014 and 2018.

As for the increase in full-time instructional positions, a focus on traditional non-profits shows an uneven distribution as well: while there was a slight increase (about 2,000 nationally) in the number of tenured and tenure-track faculty, non-tenure track faculty increased by nearly ten times that amount (Fig. 5) as the slight overall growth in full-time instructional staffing was driven largely by non-tenure-track positions.

Administrative and Non-Instructional Employment Trends
We’ll turn our attention next to non-instructional (i.e. administrative) staff reported within the IPEDS survey data.1 Much as we saw elsewhere in the industry, noninstructional staffing declined slightly (2.1%), from 2.22m to 2.17m, in the 2014-2018 period. Looking more closely, we again find a familiar pattern: part-time instructional staff declined across all types of institutions from 2014 to 2018, with non-profits with religious affiliations shedding the majority (over 62%) of their part-time staff. Increases in full-time non-instructional staff, meanwhile, were small (~3-4%) but consistent across all nonprofit institutions. As a result, the ratio of full-time to part-time staff increased from nearly five-to-one to six-to-one over this period. (Fig. 6) 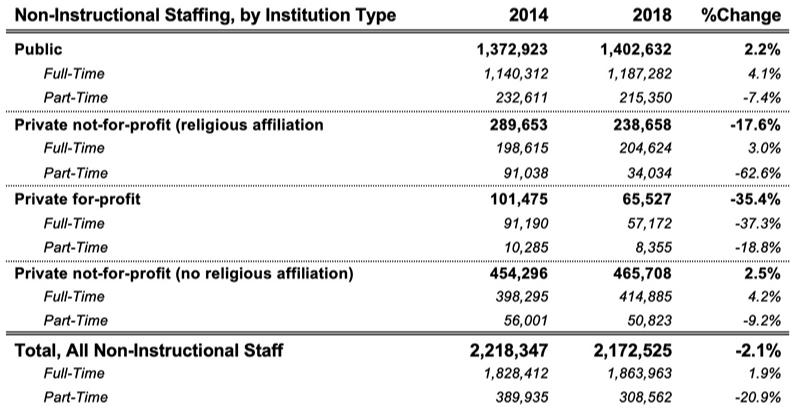 Breaking down full-time staffing by administrative category over this period reveals interesting patterns, particularly when we combine relative and absolute changes. (Fig. 7) First, there is a large drop — over 37,000 positions, or almost 10% of the total — in Office and Administrative Support staff; full-time staff in libraries and museums declined as well. Meanwhile, the following categories of administrative positions show the largest growth in absolute and relative terms: 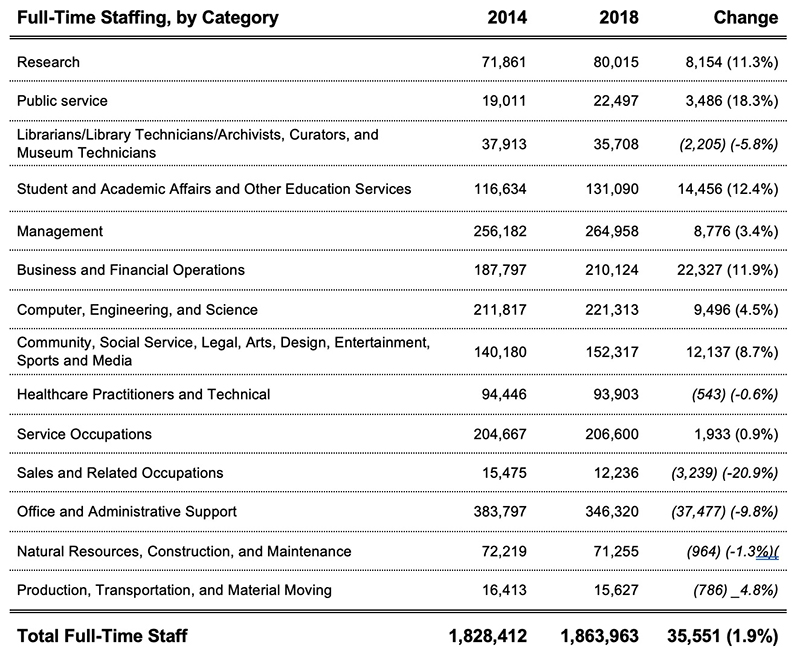 Two other categories — Management and Computer, Engineering, and Science — continued to expand as well. As a group, these pockets have added slightly more than 85,000 administrative positions in the time period.

Reading the Tea Leaves for 2019
It is too early to review IPEDS data for 2019, but the HigherEdJobs.com job posting data may give some early, rough signals of what the hiring data might look like. There is not a one-to-one relationship between the two: HEJ data includes both full-time and part-time positions, and while schools are required to report full staffing numbers to IPEDS, they are not required to post all positions to a single job board.

That said, if we limit ourselves to HEJ postings for full-time positions at institutions that responded to the 2018 IPEDs survey, we find a robust set of 226K postings for the 2019 calendar year. This subset of HEJ data includes over 45k “Faculty” positions and 180k positions classified as “Admin” or “Executive.” If we take “Faculty” positions here as equivalent to IPEDS’s instructional positions, and “Admin” or “Executive” postings as equivalent to IPEDS’s non-instructional positions, we find a ratio of instructional to non-instructional hires that tracks very closely to those reported in IPEDS’ 2018 data. (Fig. 8) Combined with geographic distributions similar to 2018 IPEDS data (Fig. 9) this suggests that earlier trends detected in the IPEDS survey data continued into 2019. 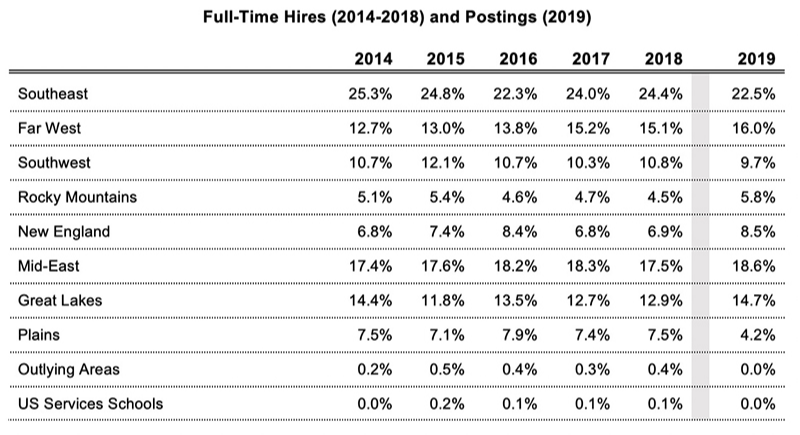 Conclusions
Overall, the high-level data from 2014 to 2018, combined with HigherEdJobs.com postings from 2019, suggests a fairly flat industry in terms of staffing. However, within those gross numbers are two countervailing trends when one considers changes in full-time and part-time staffing: full-time positions are increasing at a slow rate, while part-positions are being eliminated at a much higher rate, particularly across traditional non-profit institutions. Shifts in geography were subtle at best, and preliminary signs from 2019 job postings suggest high-level hiring ratios and geographic distribution may continue these trends.

Even while overall staffing grew slightly, hiring accelerated at a much greater rate, particularly on the administrative side. Some of this likely represents a reallocation of resources, as staff that disappeared in one category were gained in another, but the data may also suggest a healthy increase in churn as professionals still smarting from the Great Recession were finally ready to look for jobs elsewhere. That said, the trend in full-time faculty was much clearer: any gains in this segment were driven overwhelmingly by the addition of non-tenure-track positions designated as faculty.

The coming months should bring a new year of data from IPEDS, which will confirm whether these trends continued another year. That said, if 2019 turns out to have looked the same as prior years, that likely will not continue through the end of 2020. The COVID-19 pandemic has completely upended international life in 2020 and will have an effect on the higher education job market in the months ahead. Some staff will be furloughed or laid off; the sudden shift to online learning, events, and operations may well alter the types of positions that the industry requires; and the uncertainty of the months ahead no doubt will affect enrollment and retention for the fall. All of these factors and more will impact hiring and staffing in the industry, and may very well leave it looking very different from the picture painted here.

Notes on the Data:
The analysis within here is based on the complete data files, and the relevant dictionary files, that are available from the IPEDS public website. Where original and revised datasets were available for a given year, the revised data was used. The following specific datasets, and their accompanying dictionary files, were consulted for each year (the corresponding IPEDS survey is listed in parentheses):

An R script was used to read in each year’s IPEDS survey data and replace determining numeric codes (EAPCAT in the employees by assigned position (EAP) data, SNHCAT in the new hires (NH) data) with meaningful labels based on the data dictionaries for the year’s survey. The script also joined the individual survey’s data to institutional characteristics (such as size, region, institution type) for the given year to support further analysis. Following this, the separate years’ datasets were combined into a single dataset and exported to CSV for ad hoc analysis in Excel. This process was followed, with separate datafiles generated, for the analysis of all staff, all instructional staff, and all non-instructional staff. For each of these, review was restricted to institutions that actually responded to those survey components (i.e. the analysis did not consider data that IPEDs indicated was inferred).

The analysis of 2019 job postings was conducted on data provided by HIgherEdJobs.com, which was then joined to IPEDS institutional characteristics and directory information to support further analysis by geography and institution type. Positions were categorized based on HigherEdJobs.com’s taxonomies.

The EAP survey data that was used for much of the staffing analysis includes a field, EAPCAT, that groups employee/staff by human resource occupation categories and faculty/tenure status. A full list of categories, as well as other variables and their definitions, is available in the data dictionary for the EAP survey for each year. The following EAPCAT values were used to collect non-instructional staff information:


1. A listing of the employment categories included here is attached at the end of the article. Graduate assistants have been omitted as a separate category from this set, as they tend to be double-counted in other categories, based on their appointment. I confirmed that staff within these categories were not double-counted as instructional staff by combining the figures in the instructional and noninstructional staff sets, by year, and confirming that those total matched the totals reported under the “All Staff” category.