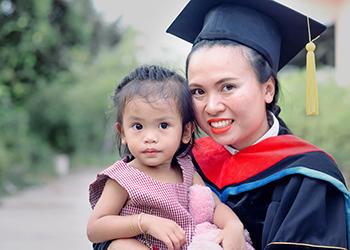 Galissa Jones hates not finishing what she started.

That’s one reason the 29-year-old Philadelphian felt so frustrated after having to abandon her bachelor’s degree in sociology from Temple University, more than 100 credits in.

“I felt completely stuck,” Jones said. “Having a college degree is really important in the working world.”

Jones is one of roughly 36 million adults nationally who have some college credit, but no degree to show for it. Like many, life circumstances got in the way. After giving birth to her first child, Jones found herself working two jobs while enrolled in college to help pay the bills. But when she was laid off from her social services position and faced health issues that required extra attention, she felt she had no choice but to withdraw from Temple, even though she was three-quarters of the way done with her degree program.

This fall, after more than five years away, she plans to re-enroll at Temple to finish what she started. “It’s been a very long journey,” she said, “but I’m going to get there.”

College non-completers are an often-overlooked population in the ever-changing landscape of higher education. A report from the National Student Clearinghouse shows that non-completers — typically defined by those who have at least two years of college coursework but no degree — are a wide-ranging group with diverse needs. The most common type of potential college completer is age 24 to 29 and has been out of the postsecondary education system for two to six years. For 17 percent of those in this category, seven or more years have passed since their last enrollment. A variety of reasons, including a burgeoning debt load, inadequate preparation for college, or other personal obligations, can prevent them from finishing their degrees.

This group not only presents an opportunity for higher education institutions but for states across the country, many of which see helping this population complete a college credential as an investment in their local workforces and economies.

Arizona, like many states, is facing a skills gap in its workforce. It also lags behind many other states in adults with postsecondary credentials, a statistic that the Achieve60AZ initiative hopes to rectify. A plan goal is to ensure that by 2030, 60 percent of Arizona adults ages 25 to 64 will hold a postsecondary credential or degree. Given other demographic changes, the only way to reach this goal, Yanof said, is to tap into the market of those who already have some college credits and encourage them to complete certificate, associate, or bachelor’s degree programs.

But helping to convert non-completers to degree holders is easier said than done for some post-secondary institutions, many of which have policies and procedures that were built around the traditional full-time undergraduate who completes a degree with no interruptions or changes in institutions. .

Although more research is underway to better identify and serve this population in the future, “the one thing that we know is that there’s never finality,” said Hadass Sheffer, founding executive director of Graduate! Philadelphia, a nonprofit which assists students who want to return to school and has spawned a network of related programs across the country. “Adults can come back at any point to finish their degree.”

Institutions can employ a variety of tactics to better serve this population, Sheffer said. Make student services available outside normal working hours. Ensure staff in various offices are cross-trained so that prospective or current students do not have to visit multiple offices to get questions answered. Creating transparent and transfer-friendly credit policies can also help, she said.

Eliminating barriers around student debt is also crucial, as students can’t get transcripts to return to college if they owe money to their previous institutions — which could be anything from unpaid parking tickets and outstanding library loans to more significant debts.

Institutions could benefit from thinking more creatively about solving this issue, Sheffer said. For instance, earlier this year, Wayne State University joined other local colleges in the Detroit area to spearhead a regional debt-forgiveness initiative that allows students with up to $1,500 in debt to re-enroll at a participating institution.

“This is about… thinking about modern ways of delivering your education, and the bottom line will deliver because of that,” she said.

For Jones, who now has two children and works in community outreach providing support for new mothers, obtaining her bachelor’s degree is an important step in career advancement, increasing her earnings potential, and setting a good example for her family.

“I’ve learned that it’s really important to start small,” said Jones, who aspires to also one day obtain a master’s degree and advance in her social services career. “A lot of times we have this grand plan to do things and sometimes your life may not allow for that big grand plan. But if you can incorporate one small thing at a time that can help you reach your goal, it’s a step in the right direction.”