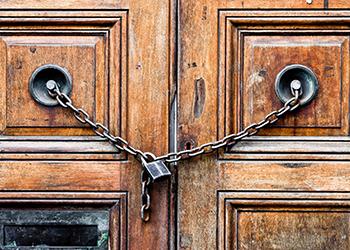 WASHINGTON — Although college closures are not common occurrences, numerous factors suggest a continuing uptick, so higher education institutions, accreditors and the government are wise to work together on reforms that protect students when such crises occur.

That was the consensus of speakers Tuesday at “School’s Out Forever: Reforming the College Closure Process,” an event hosted by the Bipartisan Policy Center.

“It’s obviously a topic that we spend a lot of time thinking about and talking about,” said Diane Jones, principal deputy under secretary in the US Department of Education, in a fireside chat-style interview.

Not all school closures are bad, she said, and there are scenarios where it’s the responsible thing to do, it’s done properly and “everybody wins.”

However, in some cases, inadequate or nonexistent planning and communication make an already difficult and costly process a nightmare for students who find themselves suddenly left in a lurch.

“When it’s not done in an orderly manner,” said Jones, “it is disruptive, expensive and unfair.”

As the federal government weighs educational reforms, including the reauthorization of the Higher Education Act, the issue of school closures has garnered attention.

Several factors appear to contribute to a recent increase in colleges and universities closing their doors and, to a lesser degree, merging. Enrollment is sliding nationwide, largely because the number of traditional college-age students — those who started right after high school — is declining.

Additionally, scores of for-profit institutions have closed. And when the economy is stronger, more high school graduates tend to go straight into the workforce rather than seek higher education.

“It’s a tough marketplace out there for most of higher education, particularly nonselective institutions,” said Dr. Robert Kelchen, assistant professor of higher education policy at Seton Hall University, in a panel discussion. “Colleges are struggling to make the numbers work.”

A consensus among Kelchen, Jones and other speakers was that a prime area of ​​focus in reforming the school-closure process is making sure “teach-out” plans are comprehensive and implemented early enough in the process to facilitate a smooth transition of students to other institutions — or, if possible, credential completion before the school officially closes.

Accrediting agencies should require that their schools file a comprehensive and timely teach-out plan that identifies, for example, other institutions that could accept their students in the event of closure, and allow discussion of the process before any closure is announced – steps that are not always taken that can facilitate an orderly closing, Jones said.

Dr. Barbara E. Brittingham, president of the New England Commission of Higher Education accrediting agency, said accreditors are urging all schools to develop teach-out plans in case they are ever needed, noting that a single sudden event such as embezzled funds could be the ” tipping point” for a school.

The Massachusetts Board of Higher Education has moved in that direction, Brittingham said, in proposing a “teach-out viability metric” for at-risk private, nonprofit colleges. If a school in danger of closure lacked the funds to finish the current and following school years, it would have to submit a teach-out contingency plan to the state’s newly created Office of Student Protection and inform students and other stakeholders of their status by Dec. . 1.

Meanwhile, the federal education department is behind other changes to how a school can wind down, such as considerations involving Title IV funds and loss of accreditation.

For example, a school in good standing can continue to receive Title IV funds for 120 days to provide an “off ramp” for the institution and its students rather than abrupt closure that leaves faculty, other employees and students no time to plan, said Jones. , the lead higher education adviser to education secretary Betsy DeVos.

The department also is modifying policy recommendations it proposed relative to borrower-defense regulations and under what circumstances students at closed schools would be eligible for federal student loan discharge, Jones said, adding that she could not provide details yet.

Other financial and accounting issues impacting closure teach-outs, such as letters of credit and long-term leases, are also being examined for reform.

Despite attacks on for-profit schools by some politicians and others who want to “wipe out” such institutions, most are small, family-owned schools and not the large, investor-owned, publicly traded corporations whose failures and closures people see in the news, said Michael Dakduk, executive vice president and director of government relations for Career Education Colleges and Universities.

Heightened cash monitoring imposed by the federal education department as an additional oversight measure in response to compliance issues “is pretty much a death sentence to the institution,” said Dakduk.

“Sometimes the department is put in a position where they have to put a school on that,” he said. “But the question is how to keep students in school to complete their degree.”

He recommended a model akin to one used by the Federal Deposit Insurance Corporation for failed banks, which could help ensure continuity for students.

“Students should not show up to a school with a padlock and a sticky note on the door,” said Dakduk.

The bottom line is that schools, accreditors and the government must work together on policies that ensure that when a school closes, the best interests of the students are preserved, said Dan Zibel, vice president and chief counsel at the National Student Legal Defense Network.

“For students, it is an amazingly disruptive event with long-lasting impact on their lives,” he said. “Some of the impact is immediate because many students use financial aid to pay for food and housing. Some students are left homeless. The answer has to be in better preparation.”

Jones said there is consensus among stakeholders about three “buckets” of proposed new regulations around the issue, and it is likely they could be in permanent place by Nov. 1 following public comment periods and any resulting tweaks.

But that date isn’t etched in stone, she cautioned, because “we think getting it right is better than getting it quick.”