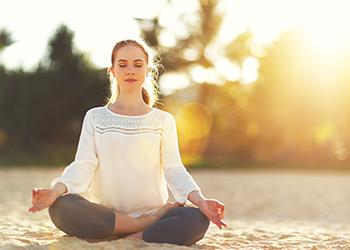 Preparing for a job interview is similar to how an athlete approaches competition. You have to be ready to respond at a moment’s notice, rely on your experiences, and execute a game plan. Both job candidates and athletes might also encounter performance anxiety that will prevent them from accurately representing their abilities.

Removing this barrier takes more brain than brawn, but within the brain, there is tension between the prefrontal cortex (the rational brain) and the amygdala (the emotional brain). The amygdala responds to fear–triggering a fight, flight, or freeze response–which raises your heart rate and shuts down rational thinking that you need during a game or a job interview.

Alison DuBois, associate professor of counseling and director of the Graduate School at Westminster College in Pennsylvania, spent last semester helping football players at her school win this internal battle. The tactics she taught the players may be just what you need to overcome job interview anxiety.

DuBois, an expert in cognitive behavioral therapy, drilled the players with mindfulness exercises daily during training camp and on Friday evenings before each game.

“Eighteen to 22-year-old guys are not always the best at regulating their emotions,” DuBois said. “In athletics, everything happens very quickly during a play and sometimes it doesn’t go your way.”

A tool for regulating emotions is mindfulness, which according to DuBois is the psychological state where one focuses on the “here and now,” allowing the mind to take a brief pause to acknowledge current experiences and the present environment.

“Think of it as a psychic decluttering,” DuBois said. “The benefit of mindfulness is that it forces you to release whatever is in your mind and creates space so that you can focus better and let go of anxiety.”

However, practicing mindfulness isn’t simply meditating or taking a few deep breaths before walking into a job interview, which is typically when the amygdala hijacks your brain functions.

“It could be something you do in the waiting room before an interview, but it wouldn’t be effective unless you have trained your brain,” DuBois said. “There isn’t really a sweet spot for how long you should practice mindfulness. Most practitioners say 30 minutes and a lot of researchers say 15 minutes is fine as long as it’s every day.”

According to a Harvard Medical School study, eight weeks of training in mindful attention meditation decreased the activity of the amygdala on functional magnetic resonance imaging scans of the brain. Clinical studies involving mindfulness have become drastically more prevalent in the last decade, showing benefits to subjects afflicted with both physical and mental conditions, including depression, chronic pain, and anxiety.

Most of the mindfulness practices DuBois guided the Westminster football players through included deep breathing and relaxation exercises where she asked them to conceptualize a problem or source of anxiety — such as sore muscles, lack of focus, or reluctance to lead — and visually release the problem. She also led sessions where players identified their strengths or simply scanned their five senses as an exercise to be more present.

Ninety-two percent of the players strongly agreed or agreed that the mindfulness exercises were of general benefit and many continued practicing mindfulness outside of DuBois’ sessions using guided meditation apps like Headspace. The team won two games late in the season that were decided by one possession including an upset win over a nationally ranked team that Westminster had long considered its archrival.

“They credited the exercises with keeping them present in the moment,” DuBois said. “They refocused their energy on what needs to be done next and not the last bad play.”

Whether it’s a past job rejection, pressure to advance your career, or an interview question that you just flubbed that is causing your performance anxiety, below are some mindfulness-related tips that you can use as part of your preparation for “game day.” (Disclaimer: these tips are not intended to be your only interview preparation; continue doing your regular research, mock interviews, and other measures.)

Believe in the Hype
Coaches don’t give pep talks to inspire calmness in their athletes, so why do so many people advise nervous interviewees to “remain calm” or “relax”? The reason DuBois said the players refocused their energy is because energy and excitement is a good thing if it is channeled appropriately.

You’re actually more persuasive and confident when you acknowledge your excitement rather than calmness, according to a study conducted by Alison Woods Brooks, professor at Harvard Business School.

“When people feel anxious and try to calm down, they are thinking about all the things that could go badly,” said Woods Brooks. in an article about her research published by the American Psychological Association. “When they are excited, they are thinking about how things could go well… It really does pay to be positive, and people should say they are excited. Even if they don’t believe it at first, saying ‘I’m excited’ out loud increases authentic feelings of excitement.”

Take a Breather
A popular mindfulness course offered to Google employees advises them to Stop, Breathe, Notice, Reflect, and Respond. Use this technique as your life jacket, especially in the minutes leading up to a job interview, if you notice the emotional brain triggering fight, flight, or freeze responses to restore your rational brain.

As a daily mindfulness practice, however, take a timeout and step away to the sidelines of your work while letting thoughts and feelings just come and go. Resisting or chasing them contributes to additional cognitive stress. Yes, part of your interview preparation will involve anticipating questions and responses, but dwelling too much on the should-do-this and shouldn’t-do-that will result in burnout. Give your brain at least a 15-minute break each day for mindfulness exercises. If you think you’re too busy for that, then you probably need to take 30 minutes.

Get in a Three-Point Stance
Think about three goals for the interview or three things you want a hiring committee to know about you. Then take three deep breaths. As you exhale, allow your fears, worries, and anxieties to exit your body from the top of your head or through the bottom of your toes. Then, with each new inhale, focus on one of your three points or goals and allow it to fill your body and mind so there’s no room for negative emotions.

Visualize a Game-Winning Drive
Many athletes practice visualization techniques, most notably swimmer Michael Phelps, the most decorated Olympian of all-time. These athletes imagine, in great detail, what they want to achieve in order to be successful. Go through a mental rehearsal of your job interview and imagine shaking hands with each member of the search committee and delivering specific responses as they nod their heads in approval.

“You must program your internal viewfinder,” said Bob Bowman, Phelps’ coach, for a Forbes article [link removed: no longer active]. “For months before a race Michael gets into a relaxed state. He mentally rehearses for two hours a day in the pool. He sees himself winning. He smells the air, tastes the water, hears the sounds, sees the clock… If you can form a strong mental picture and visualize yourself doing it, your brain will immediately find ways to get you there.”