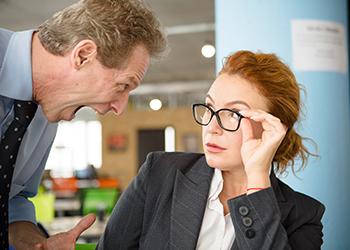 His e-mails to staff are condescending and disparaging. She yells at workers — often in front of others — when she’s unhappy with them. When a critical deadline looms, he disappears for hours and can’t be found when needed. She gives directions then repeatedly changes her mind.

These observations are among the nearly 3,000 comments workers made about their bosses in a survey by VitalSmarts, a leadership training company based in Provo, Utah.

The November survey asked 1,334 employees in the US and Canada to describe their boss’s weaknesses, particularly during stressful times such as when they must make important decisions and lead key projects. The employees answered three different questions, resulting in 2,956 responses.

The respondents wrote in candid detail about managers who:

Managers who display these behaviors tend to “have teams with low morale that are more likely to miss deadlines.” [and] budgets, and … that act in ways that drive customers away,” the survey authors wrote.

Calm, Collected, Candid
David Maxfield, vice president of research at VitalSmarts, says this study indicates just how much a leader’s communication style can impact a workforce.

“No one works in isolation. When under pressure, our actions have enormous power to tip the scales for good or bad,” Maxfield said. “When we react poorly, we don’t just hurt others’ feelings or egos, we hurt their results — we impact their ability to perform.”

Said Joseph Grenny, Maxfield’s colleague and co-author of the best-seller Crucial Conversations (McGraw-Hill, 2011): “Leaders … must understand the scope of their influence. Those watching our leaders will not only mirror their bad communication habits, but act in ways that sabotage results.”

When a manager under pressure remains calm, collected, candid, curious, direct and willing to listen, then their teams are not only happier and more engaged, the survey found, but they also tend to:

Blind Spots
Not everyone is suited to take on a leadership role, said Brandi Britton, district president for OfficeTeam, a Robert Half company based in Menlo Park, Calif. Those who may have been skilled in a previous non-managerial job don’t necessarily make the best leaders once promoted to management.

“Having good communication abilities and emotional intelligence are musts for managers, but they’re skills that require development,” she said. “Those new to leadership often go through a learning curve of working with and managing different personalities.”

Several respondents said their managers, who exhibited bad and abusive behavior, could not understand why their employees would repeatedly express low morale when filling out employee satisfaction surveys.

“Unfortunately, many manage as they were managed in the past,” she said. “If someone had a bad boss in their early career, they may wind up emulating that person when they get to be a manager, because that is all they know.”

It’s particularly difficult to call attention to the poor behavior of someone who is a senior leader, Krause said.

“HR will have to get support from other leaders and possibly the board,” she said. “The HR person must be able to make a good business case that [the bad manager is] harming their organization and they need to change,” she said. “If not, they will have a revolving door [of employees]which will not help the organization at all.”

What to Do
If HR and senior leaders agree to confront a manager about poor behavior, Krause said, HR should first sit down with the leaders with evidence demonstrating how the manager’s behavior is harming the organization.

“They must make a case for either having them trained extensively, or eliminating them,” she said. “I have seen HR convince senior leaders that a manager needs training and coaching, often from outside the organization.”

Grenny and Maxfield also shared some ideas to help managers improve their communication style, especially when under stress:

Challenge your story. When people feel threatened or stressed, they sometimes view those involved in the situation as “villains” or “victims,” ​​much as one would in a story. “Villain stories exaggerate others’ negative attributes,” they said. “Victim stories make [others] out to be innocent sufferers who have no role in the problem.” Instead, they said, approach the situation impartially, without making assumptions about who may be “right” or “wrong.”

Start with facts. When under stress, we can jump to conclusions before considering the facts. For instance, if any employee omits important statistics from a report, a manager may instantly conclude that the employee is sloppy, forgetting that weeks ago another higher-up told the worker the statistics weren’t necessary. “Before reacting to stress, gather facts.”

Create safety. When people communicate under pressure, their emotions can hijack their positive intent. What others see and hear are the emotions — manifested in screaming, for instance, or blaming — rather than the manager’s intent, which may genuinely be to draw the very best effort from the team. As a result, others get defensive or retreat from the manager. “So, when stressed, first share your positive intent,” Grenny and Maxfield said. “If others feel safe with you, they are far more open to working with you.”