by Laura L. Behling, from 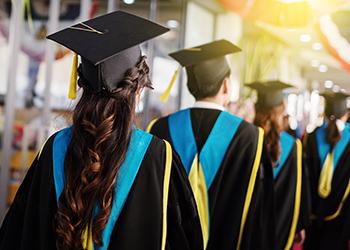 For Juliet, not all that much, since she tries to convince Romeo “that which we call a rose by any other name would smell as sweet.”

But don’t tell this to graduating seniors. At every Commencement, proud students walk across the stage and their names provide the soundtrack for these last steps of their college journey. Of course, students and their families hope (expect, really) that their name be read correctly, with the right sounds in the right places. When I served as academic dean, charged with reading those names at commencement, I’d do my best to fulfill such expectations.

Each spring, about a month before graduation, I’d invite seniors to help me pronounce their name correctly at Commencement. I set up shop in the campus snack bar several hours each week, with a list — fresh from the Registrar — of who was on track to graduate.

Without fail, some of the first few students who came by had a name that was easy, really easy to say — like John Michael Smith or Patrice Louise Jones. These students dutifully said their name to me, I repeated it back to them, and we both looked a little sheepish. I said, “I think I’ve got it,” and they offered, “I know, but I just wanted to make sure.” I think the making sure was as much about me getting their name pronounced correctly, as it was them confirming that their name, was, in fact, on the list.

Other names proved more difficult, and students gratefully corrected me if I was wrong. Those who were most helpful told me what their name rhymed with — although spelled “Leah,” one woman explained, “it sounds like the Princess in Star Wars.” Others simply took the pen out of my hand and spelled their names phonetically, a pleasant surprise since the teaching of phonics has fallen out of favor.

Many names were family heirlooms — dominated by grandparents’ names, with parents’ names not far behind. For other students, their first and middle names bear no historical legacy — neither do mine — a parental decision, I like to think, to give their children a chance to become known by their name, not as the next generation’s incarnation.

One woman asked if I could omit her middle name, and read only her first and last, declaring “I hate my middle name.” This student assured me that the name had no family significance and that her whole family knew how she felt. Although I was sympathetic to her parents, I obliged and read only her first and last name as she collected her diploma. It was, after all, her moment, and a very public moment for her to begin to assert who she would be known as.

Other students wanted names added to what appeared on my list. “Could you add the second family name to honor both sides of my Hispanic family?” I did. “Would you use my fraternity nickname instead of my first name?” I did not.

Another young woman’s middle name was the name of a Baltic country; her father’s best friend was from there, and named his daughter, or at least her second name, in honor of his friend’s homeland. She loved it, and the consonants and vowels meshed beautifully with those in her first and last names. “Say it just like the country?” I asked. “Yep, just like the country,” she said.

Correctly pronouncing names of students who are from such countries, however, was challenging. The tonal qualities of Chinese, for example, make my English language sound dull and thick. Some of these international students, as a result, have assumed Americanized names — and it is these Americanized names that they become known as. “Can you read my name with ‘Peter’ between my first and last name in Chinese?” a student asked, explaining “If you don’t, then no one will know who I am.” “Peter” was the name that his friends and faculty called him on campus. I agreed, of course, since it was important that these same friends and faculty knew his accomplishment.

Nigerian students helped me understand that to say their names correctly, I had to say all of the letters of their name, in order, and then much quicker than my halting pace through the syllables. Nepali students offered me the same advice, as did their Indian and Pakistani friends, even though the sounds of the letters differed from one language to the next. Together, we’d say their names, multiple times, picking up speed with each attempt. When they thought I had it, they’d smile, and say “that’s it” or “that’s good enough.” I vowed to practice.

A few years ago, one particular student had, in his four years at college, begun transitioning from female to male — he was known by a male name to friends and faculty, even though he had still not changed his legal name. The student was extremely anxious because his mother did not know that “she” was now a “he,” and he was scared that his male name would be read as he walked across the stage to receive his diploma. For Commencement, he wanted his female, given name, read — and then later, he would tell his Mom. I assured him that I would read his female given name. What the student disclosed to his mother later was his to determine.

The vast majority of students who collected their diplomas seemed perfectly happy with their name. When they stopped by my snack bar table a month before graduation, these same students often expressed a kind of thoughtful delight in their name, and in who they had become.

I’ve thought a lot about this seemingly simple act of reading names at Commencement. Mostly I’ve thought that this ritual is far from simple: it punctuates one of the most complex learning experiences of college — figuring out who you are and what that who will be called. The 1989 United Nations Convention on the Rights of the Child recognizes this powerful marker of human identity and human dignity. By signing on to this agreement (as nearly 200 countries have) states must act in the best interests of children by complying with basic rights, including, vitally, the right to their own name and identity from birth.

Throughout, and as a result of, their college years, some students have come to know themselves as a key component of their family and their family’s history, and are proud of that and the name that signals such. Or, they reject one or more of their names, because they are not. For others, their given name is interrupted by an Americanized name, and culturally, they are as blended — and at times as discordant — as the different tones heard in the letters of their names. For still others, family, history and culture all collide with intrinsic identity, and these students come to realize they are not comfortable, or even more acute, that they are not themselves given the name the world has known them as.

And every year, those of us who speak and those of us who hear the names are witnesses in this most profound of rituals: an affirmation by our students about what they are to be called, and who they are called to be.