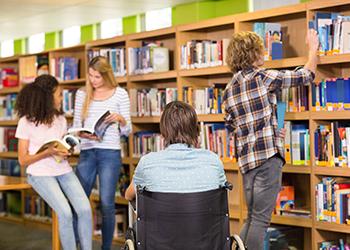 AnnCatherine Heigl, a sophomore at George Mason University, recently attempted to join all eight sororities at her school. All eight turned her down.

If you ask her sister, who Tweeted about how the experience left AnnCatherine “unwanted and devastated,” the reason the sororities denied AnnCatherine is because she has a disability: Down syndrome.

This kind of outright rejection isn’t the experience of all college students with disabilities. But AnnCatherine’s experience is hardly an isolated case. Since colleges and universities only have so much control over student-run groups, it’s important to consider how disability is viewed within the school community.

I’m a researcher who focuses on raising disability awareness in educational settings.

All students need to feel included in order to succeed in college. But when a student has a disability, inclusion can be more difficult to achieve. One study shows students with disabilities participate in fewer extracurricular activities, like clubs or on-campus events, than non-disabled peers. This is due to a lack of social inclusion, the study states. It also stems from the fact that many colleges and university programsfocus mostly on academic and physical accessibility.” The social participation of students with disabilities gets less attention. Since many extracurricular activities are student-led and organized, it’s all the more important to understand how peers with disabilities are being excluded.

Start Early
First, teachers at the K-12 level need to develop skills to talk about disabilities. While educators might teach about topics like race, class, gender, or sexuality, disability is often left out of the discussion.

Ask yourself: How many books did you read in school that featured characters with disabilities? How much did you learn about the disability rights movement in your social studies classes? Or was it largely a hidden story?

Some educators have began to recognize the importance of disability-based lessons. Still, I’d argue that those lessons need to be more Deliberately incorporated in school

By the time students enter college, they might hesitate to discuss disability because they are worried about saying the wrong thing. Awkwardness and avoidance can continue long after college.

Teachers can help by using literature to discuss disability in class. The Mainstream success of RJ Palacio’s Wonder — a book about a boy born with a craniofacial disability — shows how this is possible.

Think about Language
When people do talk about disability, they may default to “disability rhetoricThis sort of rhetoric casts people with disabilities as either inspirational or pitiable.

Inspiration-based language is problematic too. Colleges and universities should examine how disabilities are portrayed in their campus literature. They should also consider using language that reflects the reality of disability. Rather than glorify or pity a person with a disability, talk about them like they would anyone else. Recognize the person and don’t focus on the disability.

At Villanova, where I teach, LEVEL, a student-run disability awareness group, provides opportunities for students to raise awareness and participate in fully accessible social activities on and off campus. Similarly, Disability Rights, Education, Activism, and Mentoring, or (DREAM), is a national organization that advocates for campus disability groups and individual students. Groups like LEVEL and DREAM show the way towards greater inclusion. For example, members of LEVEL recognized that “service break trips,” where students travel and work together on a community service project, were not accessible to all students. In response, LEVEL organized the first fully accessible service break trip.

Make Disability a Part of Diversity
Although many colleges and universities have embraced diversity initiatives, disability still gets short shrift.

For instance, in a recent study of the California State University System, researchers found that 66 percent of the websites had minimal information about disabilities on the home pages. Why does this matter? The home site is the “virtual face” of the university. It’s how a university represents itself to prospective students and the public. The authors of the study argues that visible representations of disability are important to make students with disabilities feel “welcome on campus in the same way that images of racial or gender diversity are used to attract diverse applicants.”

In a recent opinion piece, Rosemarie Garland Thomson, a disability justice leader and professor at Emory University, said that most people do not consider people with disabilities as having a shared social identity or a political status. Given how the disability community has struggled to earn basic civil rights, including access to educationemployment, and healthcareit is important to think about disability in terms of diversity.

How Disability Can Be Visible and Invisible
After the passage of the Americans with Disabilities Act In 1990, colleges and universities had to rethink what accessibility looked like on campus. In many cases, this involved ensuring physical access to previously inaccessible spaces.

Recently, there has been a movement to map the accessibility of colleges and universities. At Penn, a graduate student and his colleagues developed the Accessibility Mapping Project. This project is an effort to digitally map the “emergence of physical and social barriers” around campus. The project shows that a lack of physical access, such as having stairs instead of a ramp, also erects a social barrier, as people with disabilities cannot participate in that space.

It’s important to remember that disability isn’t only physical. In fact, many college students with invisible disabilities, like learning disabilities or autism, still struggle to access appropriate accommodations in their university classrooms.