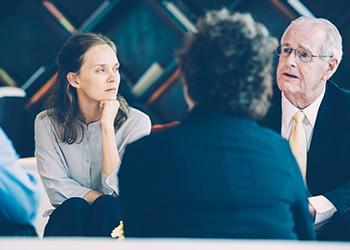 How do we approach difficult conversations? Do we seek to understand and work through differences to find common ground or are conversations contentious and unproductive? I have argued for deliberation and dialogue to support outcomes that are more thoughtful and inclusive of all participants’ perspectives. Dialogue is especially important when addressing Culturally sensitive and controversial topics. But what does dialogue look like and how does it contrast with less effective forms of conversation?

Let’s explore three forms of conversation and their relative value in promoting positive and productive outcomes.

Polite but unproductive discussion. In routine workplace and business settings, we are conditioned to be polite and respectful in conversation, even if we are seething underneath because we aren’t getting our point across or being heard nor willing to give others similar consideration. We are typically not demonstrative, outwardly angry, vindictive, or hostile. We are not necessarily out to defeat the other person, as will happen in debate, but we aren’t willing to let go of our positions and seriously consider and evaluate others’ points of view either, as occurs in dialogue.

It is instructive that the roots of the word discussionmeaning, “to shake apart,” are shared with percussion and concussion. Percussion involves a noisy “bang” on the drum. Concussion involves a painful and potentially life-threatening “bang” on the head. So, what is happening in discussion? Discussion is the default standard for everyday discourse, but its reputation far exceeds its value. It may appear polite and respectful, yet often involves a clash of perspectives and opinions among opponents ill-prepared, unschooled, and unwilling to move the dial toward meaningful resolution of differences.

Individuals engaged in this form of conversation tend to:

All-out argument and debate. This is not about rhetorical, structured exercises learned in debate class, which involve well-defined rules emphasizing civility, respect, and the presentation and defense of well-reasoned arguments. We rarely see political opponents and talking heads square off this way to offer opposing, yet valid insights to worthy adversaries. Instead, they discard implicit rules of civility and respect and shout one another down, resort to personal attacks, and fail to address honestly arguments that challenge their positions. Their goals are not simply to win points, which is problematic enough, but to defeat their opponents at all costs.

Perhaps our media-obsessed culture has sanctioned such behaviors to the point that debate has become the accepted standard for everyday discourse. Individuals engaged in this form of conversation, if we may call it that, tend to:

Engaged and fruitful, though not always comfortable, dialogue. In dialogue, we give voice to our concerns, knowing others may disagree, yet will listen intently, inquire thoughtfully, acknowledge our concerns, and offer differing viewpoints without dismissing ours out of hand. While we ultimately need to reach decisions that will address our disagreements, the best approach is to seek to understand one another, our respective contributions to the problem, and why we struggle in our interactions with one another. As much as we want our positions to be heard, fully explored, and factored into deliberations, we are encouraged to take time to consider others’ viewpoints without reacting, rushing to judgment, or dismissing them. If we are successful, we will feel heard, appreciative of others and their concerns (if not fully in agreement), and largely satisfied that decisions reached incorporate and respond to concerns on all sides.

Dialogue requires the investment of time to delve below the surface to get at what is troubling us, which polite discussion rarely and all-out debate never achieves. Dialogue is not always comfortable. The discomfort we feel in discussion and debate comes from constantly having to defend ourselves and avoid losing face. In contrast, our discomfort in dialogue comes from being vulnerable to face our limitations and contributions to the disagreement as much as, if not more than, we challenge the limitations and contributions of others. True dialogue will not occur without creating safe environments where people can open up without feeling harshly judged, personally attacked, or diminished for their courage.

Individuals engaged in this form of conversation tend to:

Our challenge as leaders is to learn and adopt practices for engendering dialogue in all conversations, whether they are routine or difficult. This includes modeling dialogue skills and behaviors, calling upon and establishing appropriate guidelines for dialogue before engaging in difficult conversations, and following through to allow for time and full deliberation and input from others to reach the best and most informed decisions.