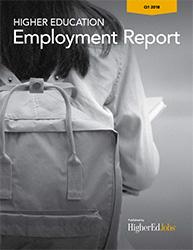 According to a new report from HigherEdJobs, the total number of jobs in higher education increased during the first quarter of 2018 but at a slower rate compared to last year.

According to an analysis of US Bureau of Labor Statistics data by HigherEdJobs, higher education employment increased 0.3 percent, or 13,000 jobs, during the first quarter of 2018. While positive, the increase was roughly half the growth observed one year earlier, in Q1 2017. , when higher education jobs increased 0.7 percent, or about 26,500 jobs. All of the growth in Q1 2018 can be attributed to an increase in jobs at private institutions, which increased slightly more than 1.0 percent, or about 14,800 jobs. Meanwhile, the number of jobs at public institutions declined by about 0.1 percent, or about 1,800 jobs. The decline in the number of jobs at public institutions can be directly attributed to a decline in jobs at community colleges, which were down by about 9,500 jobs.

The report analyzes the most current data from the US Bureau of Labor Statistics and HigherEdJobs’ posting trends from roughly 870 colleges and universities that have continuously subscribed to the company’s unlimited posting plan for four years. The full report can be viewed at http://www.higheredjobs.com/career/quarterly-report.cfm.