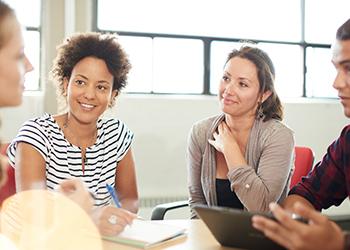 As a Chief Diversity Officer, I have conducted scores of diversity trainings over a twelve-year period. Recently, a former professor of mine and I engaged in a conversation about the need for new and more inclusive frameworks for cross-racial intergroup dialogue. I emphasized the need for authentic conversations in safe spaces where people from all races come together with the goal of breaking down systemic and individual racism. My professor, ever wise, responded with her own set of questions to my assertion. She asked, “I wonder what we might get if we create environments where individuals feel brave enough to try out ideas.” and courageous enough to let people change their minds, compassionate enough to assume each others’ good intention, and strong enough to apologize for any impact they may have caused regardless of their intentions.” After our conversation, I spent the next few weeks in deep thought. about safe spaces versus brave spaces. I came to the conclusion that if real progress were to occur, we need safe spaces filled with brave individuals willing to set aside preconceived notions, defensiveness, blaming, and shaming in exchange for picking up courage, patience, humility, and forgiveness.

But first, America, we have to talk about race. We ALL have to talk about race. We are long overdue for this talk. As an African American/black woman who has spent over a decade doing diversity work, I believe that we must create safe and brave spaces that invite all people into diversity dialogues on topics that pertain to race. In fact, I think that we need to throw away existing models that bring groups of employees, faculty, students (pick your audience) together for one, four, eight hours and then checks the proverbial professional development box for the strategic plan or accrediting body. . At a recent women’s conference, I was asked what is the best way to approach diversity and inclusion training. Much to my surprise my response was quoted the following morning in the Albany Times Union where I talked about transparently acknowledging the tribe within the tribe and the need to (in this instance) build trust between black and white women where little to none exists. In the opinion of this CDO, the best way to approach diversity and inclusion today is through relationship establishment, trust building, authentic and transparent dialogue, the willingness to be vulnerable coupled with the willingness to be brave. This type of work is not done in an hour or a day, but instead happens gradually, over time.

To be clear, for this approach to be successful, it must originate from the very top of the organization and have buy-in from senior leadership on the administrative side and respected tenured faculty across the range of disciplines on campus. There must exist a willingness to incentivize with either a carrot or a stick, by rewarding participation and establishing zero tolerance for non-participation. This cannot be the optional, mandatory training day in which the choir shows up to celebrate their progressive approach to racial harmony and denigrate their colleagues who remain ambivalent or hostile about racial unity. It will be messy but when we emerge from this experience, we will have learned some things about ourselves and about others that we were heretofore unwilling or unable to see.

Why do we need to do this work? We need to do this work because when it comes to race we are talking past each other. We need to do this work because we keep doing diversity the same way over and over and expecting different results. We need to do this work because the solution to what ails us as a society will not be found in homogeneity. Particularly, we in higher education need to lead this work because for a long time we have been a part of the problem. We have done an inadequate job framing and defining racial issues in our society, particularly around white privilege. It was in another conversation that my former professor stated that “the academy as a whole does a poor job of explaining whiteness and white privilege. We wrongfully come across as if we are against white people, which we are not. We are not against white. people. We are against an ideology of White Supremacy and a system that supports that ideology and advantages people with privilege because of white skin color.” This is the great disconnect when it comes to explaining privilege. Privilege conversations are not about pointing fingers, shaming, and blaming individual white people. They are about having an open, candid, honest, and transparent conversation about how this country was built to advantage a certain race, gender, faith group, and social class while understanding how that system still benefits those individuals today. That’s the bad news that divides us as a nation. The good news and the news that can unite us is that white people can be against White Supremacy too. Acknowledging white privilege is not acknowledging that every white person has benefited from this privilege. Indeed, many have not, so if we really get to the core of the matter and begin to have the brave talks in safe spaces, we’d have to unpack the psyche behind how people who don’t benefit from a system that oppresses them. can still be so committed to upholding, supporting, and reinforcing this system even when it’s against their and their children’s own interests.

What I have experienced in the past and wish to see again in the future are white people and people of color, coming together to dismantle systems of injustice and the belief of White Supremacy. This work can advance when we explore new paradigms for diversity and inclusion dialogues. There are people out there who can help lead those discussions within a new framework and they might not be who you naturally think of. It takes more than someone fluent in scholarly discourse, experienced in frameworks for intergroup dialogue, adept at utilizing existing CDO models for inclusive excellence, or published faculty from the social sciences and other knowledgeable practitioners. It’s a new breed of diversity scholar/practitioner or perhaps it’s a non-scholar/practitioner with an authentic approach, transparent communication style with high emotional intelligence and who is skilled in matters of diplomacy. Perhaps it’s someone skilled in both/and sort of way. I really don’t know, but I do know this, whoever ze may be, we need zir now.