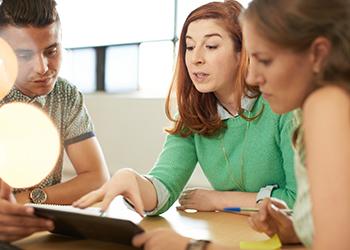 In today’s more algorithmic world there is an assumption that technology skills will reign supreme. It’s undoubtedly true that we must become conversant in technology. This coming familiarity with technology will certainly factor into roles and opportunities. In fact, there’s a strong case that in addition to the commonly understood aptitudes in IQ and EQ, “technology quotient” or TQ is fast becoming another point of evaluation.

But it’s presumptuous to believe that this will supersede or replace our need for soft skills. The counter-intuitive reality in this fearful era of automation is that fundamental human skills of collaboration, communication, empathy, and adaptability rise to the forefront.

Let’s take a look at the Washington Post. When Amazon’s Jeff Bezos purchased the newspaper in 2013, many might have concluded an end to human reporting, and a rise of machines. After all, Amazon is known for its ruthless efficiency, and its use of little orange Kiva robots that maneuver around its warehouses, retrieving and assembling items for shipment. But instead, the Bezos acquisition of the Washington Post has heralded a refocus on humanistic technology, or using technology to make the paper more efficient: not to replace, but to supplement the human skills of its reporters.

Joey Marburger is its director of product, and he’s leveraging artificial intelligence to free reporters from the mundane. For example, AI can be used to turn structured data from an earnings newswire into basic boilerplate text. Rather than writing an entire story, AI surfaces factual data and makes it narratively accessible. It allows the Post to track thousands, rather than hundreds, of stories, and it allows the reporter to focus on the broader context, on speaking with experts, on communicating the nuance, rather than the raw facts. As information becomes a greater commodity, it is this human nuance, this perspective and flourish for eloquence, which is why we choose to pay for a publication like the Post.

Technology has, and will continue to erode the routine tasks within our work. There is diminishing need to hire someone to extract facts from a newswire or construct the scaffolding of a news story, because this is a narrow and highly routine task. We can use technology to script this task, just as we can ask someone to input their own order on an iPad in a restaurant, or purchase a robot that makes perfect hamburgers. But in all of these situations the human roles shuffle, rather than disappear. Airport check-in kiosks allow attendants to focus on customer service and particular situations. Partially self-service restaurants such as Shake Shack in New York’s East Village neighborhood do not operate sans employees; every employee becomes a friendlier, more attentive version of him or herself.

We assume that those with the technology skills will be the clear winners in tomorrow’s economy, but the truth is more nuanced. David Deming, an economist and professor at Harvard’s Graduate School of Education, has focused his research on the importance of social skills. What he has found is that it’s not the quantitative, or “high math,” skills that are alone valuable, but the fastest job growth is actually in what he calls “high math, high social.” His research points to the reality that we live in an increasingly data-driven, technology-led world and we all need to be conversant in the parlance and broad strokes of how to use technology. We don’t all need to learn to code, but we should all perhaps know what code is, and the high level of how our information economy operates. But his research also highlights something that is overlooked in the media frenzy around Science, Technology, Engineering, and Math (STEM) and advocating that everyone learn to code. Social skills, which require verbal and written communication, and empathy, are of equal value.

In a world where machines take over the routine tasks, humans are left with the complexity, the changing environments that require flexibility, improvisation, and novel problem solving. In this higher-complexity environment, there’s an argument that we specialize more, drawing on the expertise of others. In other words, to get things done, we need to collaborate. We need to, in effect, trade tasks. In every trade there is friction, and that friction is how well we communicate the need or desired outcome to another individual. It is those of us with high social skills who can reduce the transaction costs of each trade, collaborate more effectively, and maintain the most coveted skills in this higher complexity, techie world.

Counter-intuitively, it is the soft skills that matter in solving the hardest problems. While we make the rush to embrace technology, we ought to hit the pause button and draw on the research of David Deming. It is a balance of high math, and high social, a blending of both fuzzy and techie that positions us with the skills most needed in our brave new world.