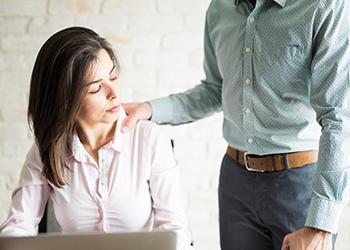 Sexual harassment cuts across all professional industries, as validated by the recent “me too” campaign. Incidents can be found in politics, law, education, corporate and blue-collar America, and Hollywood. One need only search Google for “sexual harassment cases” to find the articles: there are cases against prominent law firms, financial institutions, tech companies and even a yoga instructor.

Companies that take a “not us” attitude are setting themselves up for potential disaster. It is unlikely that Uber, Google, Chadbourne & Parke, Kleiner Perkins (where Ellen Pao worked) and the countless organizations that face public gender harassment and discrimination scandals ever thought it could happen to them. But it did.

Although claims of sexual harassment prevail in nearly every industry, according to the Equal Employment Opportunity Commission’s (EEOC’s) acting Chair Victoria Lipnic, “only about 30 percent of women who experience harassment ever complain internally.” Even fewer are likely to file a charge with the EEOC, although companies can still be aware that inappropriate behavior is occurring.

How an enterprise handles a complaint — or even a whisper — of sexual harassment has significant impact. For example, in the case of the Weinstein Company, it seems incredible that the company’s board denied knowledge of the actions of its founder. Yet, many companies will turn a blind eye to the actions of executives, top performers or great salespeople.

Failing to prevent an issue — or worse, ignoring an existing problem — can have monumental, negative consequences, all of which have significant financial ramifications. If the victim complains to the EEOC, the company will be the subject of an investigation, and, if meritorious, a lawsuit by the EEOC on behalf of the victim. In 2016, the EEOC received approximately 27,000 charges of sexual harassment.

Victims more often consult with a private attorney who can directly file a lawsuit against the company. However, many victims do not initially take this route out of fear of retaliation or public humiliation.

Rather, incidents of sexual harassment often come to light via social media, as in the case of Harvey Weinstein, Bill Cosby and Bill O’Reilly. Then comes either an EEOC investigation, litigation or both.

Depending on the facts and complexities of a case, including whether it is litigated or settled, actual out-of-pocket costs for a company can range anywhere from $100,000 to millions of dollars. And that does not include reputational costs, and costs associated with loss of clients, customers and investors (as with Uber), as well as the opportunity costs associated with attracting and retaining talent.

Ignoring claims, whispers, or “open secrets” about bullying, sexual harassment and other predatory conduct will (not may) have severe ramifications for any company. In addition to legal and financial consequences, dismissing or even discounting employee complaints will have a domino effect inside an organization:

So, what is a company to do? These are best practices to follow.

Develop, implement and practice a good anti-harassment policy. If you don’t have one, get one. If your “policy” is not written down, formalize it and publish it to all employees. If your policy is sitting on a shelf in your HR manager’s office and has not been reviewed in the past several years, dust it off, work with a legal professional to revise it, and add examples of unacceptable conduct and consequences for violations.

Have a multi-option complaint policy. Companies should have two or more unrelated ways that employees can complain about harassment, discrimination or retaliation. For example, if your policy states to go to the president of the company, and that individual is the harasser, your policy is completely meaningless.

Investigate the conduct. Even if you do not have an official complaint, but merely whisperings in the office — or outside the office at an event or on social media — do not hesitate to properly investigate the alleged conduct. Hire an outside investigation firm, or contact an attorney for guidance.

If the evidence warrants, take action. Even if the person is your top performer, CEO or best salesperson. Sexual harassment is inexcusable regardless of who the harasser is.

Do not fall into the “not us” trap of complacency. Be preventive and proactive. Bring in a third-party expert to conduct a diversity audit or assessment. Every company should examine what cultural and diversity issues exist and could exist. If your corporate culture does not truly value respect, open communication and psychological safety, your company has potential exposure. Create strategic solutions, particularly around gender diversity, that are substantive, comprehensive and measured. Simply having these initiatives in name only (or “checking the box”) is not enough and can in fact work against a company in the event of litigation. Educate your workforce. Training on sexual harassment is a start, but it is not enough. Companies also need to educate their employees on issues of communication, team collaboration and implicit bias. Embed a culture where any inappropriate behavior is not an option.

The costs of dealing with a diversity crisis like sexual harassment — litigation, destroyed reputation, loss of customers, clients or investors, inability to attract and retain talent, loss of competitive advantage and sustainability — is far greater than making the investment in your culture. The pain can be prevented. Bet the Weinstein Company now wishes it had done things differently.