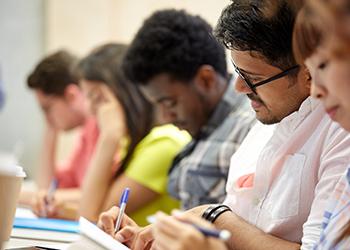 Affirmative action continues to be a relevant and controversial topic in higher education. In this month’s interview Michele S. Moses, associate dean for graduate studies at the University of Colorado Boulder, shares her thoughts on affirmative action, its effects on students, and her career path.

Andrew Hibel, HigherEdJobs: Dr. Moses, the university recently awarded you the prestigious Hazel Barnes award, which is given to a faculty member who “best exemplifies enriching interrelationships between teaching and research, and whose work has had a significant impact on students, faculty and colleagues, and the university. ” What are your “secrets to success”?

Michele S. Moses, associate dean for graduate studies, School of Education, University of Colorado Boulder: I’m not sure there are any secrets, but I can say that it helps to think of work as a scholar and teacher in an integrated way, so that teaching and research each inform the other and students have many opportunities to engage in those areas. as well. For me, teaching includes student mentoring and advising quite centrally; it’s one of my favorite parts of my job to get to know my advisees well and work very closely with them. Before I became a professor, I was fortunate to work in higher education administration and student affairs on several different college campuses. I think those experiences of working with undergraduate students outside of the classroom have served to inform my work as a faculty member.

Hibel: According to your biography, your research has investigated “the roots of the political debates over race-conscious policies that profoundly affect meaningful opportunities for higher education, with a focus on the nature of persistent moral disagreement over affirmative action.” What have you found to be the “moral disagreement of affirmative action” in academia?

Moses: Affirmative action in higher education admissions has long been a controversial issue in the United States. I have spent time trying to examine why it is that people can agree on democratic ideals, like, for example, “equality” or “diversity” and yet have very different ideas of the policy prescriptions required to support those ideals. I wanted to understand this seeming paradox. Because the US Supreme Court ruled in Grutter v. Bollinger that it’s constitutional for colleges and universities to consider race and ethnicity in admissions decisions, it might seem that defenses of affirmative action and related race-conscious policies no longer would be necessary. The highest court in the land decided that diversity is a compelling state interest and that narrowly tailored affirmative action plans are acceptable ways for colleges and universities to foster that diversity. However, the disagreement about affirmative action has never been related to straightforward questions of what the law allows. If that were the case, then the Regents of the University of California v. Bakke decision back in 1978 should have put out the fires of controversy because it affirmed the constitutionality of considering race in college admissions decisions.

So, I’ve come to see the debates over affirmative action and other race-conscious education policies as moral disagreements that stem not only from obvious factors like racism, but also — and importantly — from differing conceptions of central democratic ideals, in particular equality, liberty, and diversity. These debates are the result of profound disagreements between those who believe that democratic ideals require equal opportunity policies like affirmative action and those who believe that similar or parallel ideals instead require abolishing them. My aim has been to try to think more carefully about why we in the United States just cannot agree about race-conscious policies like affirmative action, and help us go beyond knee-jerk responses (for example, “if you don’t support affirmative action, you’re racist”; or, “if you do support it, you’re just a bleeding heart”), in order to better understand the multiple facets of the debate.

In terms of what makes a particular disagreement specifically a moral one, moral disagreements involve enduring, contested public issues involving values, relationships, and ideals, as opposed to individual, personal disputes. Moral disagreements endure despite significant agreement about factual or even moral considerations. Disputants may agree about factual claims and about (some) moral values, but they disagree in their moral evaluations (that is, about what to do). What this means is that in the case of race-conscious education policies like affirmative action, there exists a persistent moral disagreement despite ostensible agreement about the importance of basic moral ideals such as freedom and equality. The source of disagreement is not only about disputants’ opposing moral values ​​but also about the combination of a difference over the applicability of a commonly held principle requiring equality of educational opportunity and over the priority given to another shared moral principle requiring the protection of individual liberty. .

Hibel: This may be difficult to answer in a few paragraphs, but what are some take-away ideas that our readers should know regarding policies of affirmative action and the significance it brings to student applicants in higher education?

Moses: Affirmative action is a necessary policy because equality of educational opportunity still does not exist in the United States across race, ethnicity, and socioeconomic status. The public debates over affirmative action often miss important truths. Ideally, despite political parties, policy makers and educators are all interested in educational opportunities for all students. We know that four-year institutions of higher education enroll more affluent white students than their proportion of the population. And we also know that racial and ethnic diversity within a college setting are crucial for every student’s education, for the accomplishment of institutional missions, and contribute to the very core of what institutions of higher education do.

When students interact with people of different backgrounds, both research and common sense have shown that this creates a learning environment that fosters critical thinking, empathy, and democratic dispositions.

Also, I think it is important to note that even though there is a lot of public debate about affirmative action, in reality, the affirmative action efforts at selective colleges and universities are modest. Their use in admissions processes is meant to promote higher education opportunities needed to lead us to a more racially and ethnically integrated society, which is needed for a democratic society where all people are treated as equals, and leaders and professionals are genuinely prepared to engage with diverse others with respect, understanding, and reciprocity.

Hibel: A recent article [link removed: no longer active] from North Carolina State said, “Without affirmative action, it is likely that our nation’s premier colleges and universities would be mostly occupied by white men and Asian American students, who tend to score higher on standardized tests than women and other minorities”. What are your thoughts on this?

Moses: Numbers of underrepresented students of color applying to selective colleges are small compared to numbers of white students. Honestly, it is just not possible that the small numbers of students of color who apply and are admitted are displacing a significant number of white students. The arguments claiming that affirmative action for underrepresented students is unfair to other students are wrong largely because they rely on ideas about merit for college admissions based solely on test scores. Fair college admissions practices need to be based on philosophies of college access, educational opportunity, and holistic reviews of applicants’ varied qualifications, not solely or even primarily on quantitative measures of academic merit like standardized test scores. College officials will tell you that so much more goes into building a college class than the highest SAT scores. In the holistic admissions processes endorsed by the Supreme Court in Grutter v. Bollinger (2003), standardized test scores are not the only, or even the primary, criterion for admission. Holistic review takes into account factors such as a commitment to public service, overcoming difficult life circumstances, achievements in the arts or athletics, or leadership qualities in the quest to admit students to selective colleges that recognize the national interest in diverse educational institutions, given the well-proven educational benefits of diversity.

Hibel: HigherEdJobs published an article on the myths of affirmative action. A few of the myths discussed were that affirmative action is about “meeting quotas” or “hiring less qualified staff because of race or gender.” What are your thoughts on if these or other myths exist and how they affect higher education, or society as a whole?

Moses: I do think these myths continue. Here’s a prominent example of how those myths may influence current policy and practice. In August, journalists reported that the Justice Department under President Donald Trump is planning to investigate a complaint of discrimination against an elite university brought by a coalition of Asian-American groups through their Office of Civil Rights. Unfortunately, the Trump administration’s initiative reflects a flawed understanding of race-conscious education policies like affirmative action, what they do, how they work, and whom they affect. This flawed understanding perpetuates the myths you bring up here. I’m afraid that they are engaging in a politics of intimidation, to scare colleges and universities with threats of costly litigation.

As I mentioned above, affirmative action is justified in part because of how it contributes systemically to racial and ethnic diversity among professionals and leaders. Even a quick look at the race, ethnicity, gender, and social class of the vast majority of President Trump’s administration demonstrates how far we still have to go to achieve equal opportunities in the United States.

Hibel: Please briefly explain your career path and how it led to your research interests.

Moses: I grew up in a multicultural, multilingual, multigenerational, working class immigrant family in New York. Nothing was more important in my family than education. As the first in my family to graduate from college, a different world was opened for me and I loved being in the vibrant setting of a college campus. I ended up getting a master’s in higher education and working for several years in student affairs at a few different colleges. My experiences at both public and private institutions that are predominantly white fueled my scholarly interests in race-conscious education policy, particularly from a philosophical perspective. What do higher education institutions owe the students they accept for admission? How should those selections be made? How should higher education contribute to and invigorate our democratic society? These are the kinds of questions I am still exploring.

Hibel: What keeps you engaged working in academia?

Moses: For me, it’s the students and the opportunities that scholarly work provides to engage with communities, politics, and democratic deliberation. Each part of my job is essential — teaching, scholarship, community engagement. I think it’s crucial for academics to use their expertise to inform social and political discussions, justice movements, and positive social change, especially during this moment in the United States, where ideals like democracy, truth, knowledge, science, expertise, and basic humanity seem to come under attack on a daily basis.