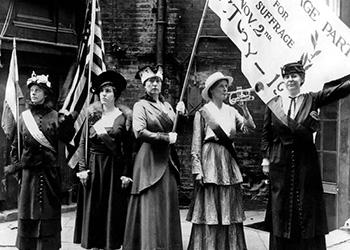 This Saturday, the American Association of University Women (AAUW) hosted its Women’s Equality Day celebration with the Newseum in Washington, DC.

While the celebration reflected on the country’s 97 years of progress fighting for gender equality in political offices, in the workplace, and in civil rights movements for women starting with the passing of the 19th Amendment, AAUW and political experts say there is still work to be done in the fight for women’s equality.

“It would be easy to be disheartened by how long it’s taken to get to even where we are with some gaps closed but many still remaining,” said Anne Hedgepeth, interim vice president of public policy and government relations at AAUW. “But I certainly think that there is real increased activism and enthusiasm about taking on issues of inequality right now.”

AAUW’s advocacy on women’s equality and the Newseum’s commitment to protecting the First Amendment each reinforce the ongoing fight for both issues.

Today, women across the country are not only pushing for more legislative representation, they are also advocating and protesting for issues like equal pay, quality reproductive healthcare and childcare, and efforts to decrease poverty and homelessness.

Nancy Pelosi, the Minority Leader of the US House of Representatives, asserts in her Women’s Economic Agenda that “when women succeed, America succeeds.” In the agenda, Pelosi advocates for better and equal pay for women, for workplace policies that allow work-life balance and paid maternity leave, and for more support of women business owners, among other policies, that will bring more economic support for all women. .

Dr. Kelly Dittmar, a Center for American Women and Politics (CAWP) scholar and a political science professor at Rutgers University-Camden, says that the country can improve gender equity by preventing the stagnation of women’s political representation found in recent decades.

This includes increasing “the number and success of women candidates” through party support, financial resources, and strategic guidance. “It also means expanding the candidate pool for women to include women from diverse occupational, racial and ethnic, and ideological backgrounds,” she told Diverse.

Research by the CAWP shows that only 21 women serve in the US Senate and 84 women serve in the US House of Representatives. Collectively, women make up only 19.6 percent of the 535 members of Congress despite being roughly 51 percent of the total US population. This places the US at 100th out of 193 countries in the world for representation of women in national legislature, Dittmar said.

The country must also work to combat structural and cultural barriers women face in political institutions such as “the dominance of men in recruitment and fundraising networks,” and the fact that women still have to “disrupt expectations of how a candidate and/or officeholder looks.” and behaves,” Dittmar said. “For too long, stereotypical expectations of candidacy and officeholding have aligned with stereotypical norms of men and masculinity.”

She adds that gender dynamics played out in how voters, the media and opponents talked about Hillary Clinton “in a way that would have likely been different were she a man.” Clinton also believed misogyny and too much change created “very real problems” for voters.

“Trump’s candidacy may have actually exposed most clearly the work we have yet to do to rethink the presidency in a way that both accepts and values ​​women in that role,” Dittmar said.

Regardless of gender and party, the AAUW provides information on where political candidates from local and federal levels stand on issues like education equity and pay equity, and ensures “that all voters have access to information about the issues that we know are really important to them ,” Hedgepeth said. AAUW’s partnership with the Newseum also stresses the importance of increased access to the ballot box and political offices for women and women of color.

Nearly a century ago, many women of color were not initially granted the right to vote on pressing issues when the Nineteenth Amendment passed. Racism within the women’s suffrage movement and state laws and racial discrimination kept women of color from the ballot, according to the AAUW. Still, women like Sojourner Truth, Ida B. Wells, Patsy Mink, Dolores Huerta, or Wilma Mankiller continued to advocate for gender equality in the democratic process.

“In recent years, AAUW has proudly worked with the Newseum to raise awareness around suffragists and gender equity trailblazers,” said AAUW Chief Executive Officer Kimberly Churches. “We know that their stories will inspire new audiences and keep all of us motivated not just to vote in every election but to remain engaged in progress at all levels.”

The Newseum states that for more than 20 years, it has been a champion of the First Amendment and a convener of conversations about all topics related to all five freedoms given in the First Amendment. As more people protest and become activists, Sonya Gavankar, a Newseum spokesperson, says the organization is “very excited that people are really taking their personal issues to heart and going into the streets in many cases to protest, and having the conversations that we have really been excited about people having.”

Just this year, the Women’s March-organized by Tamika D. Mallory, Bob Bland, Carmen Perez and Linda Sarsour-mobilized between 3.3 and 4.6 million people on the day after the presidential inauguration, making it the largest one-day protest in American history. . Protesters at the march joined together to uphold the organization’s mission “to harness the political power of all women and their communities to create transformative social change.”

The Women’s March organizers now have a Women’s Convention set for October 27-29 that will tap into the power of diverse demographics of women in leadership at the grassroots level.

Saturday’s AAUW event at the Newseum hoped to give visibility to some of the gaps women still face, Hedgepeth said. Activities included interactive activities and resources about social movements useful for students in the classroom, such as making suffragist buttons and sashes, an outdoor exhibit on women’s suffrage, and a “Take action” stand.

Visitors could also learn more about the organizations’ online Newseum ED curriculum on women’s suffrage titled “Women, Their Rights and Nothing Less,” which explores the ways the suffragists embraced the First Amendment as a tool to achieve the passage of the Nineteenth Amendment on Aug. . 26, 1920.

The fight for women’s equality, however, “should not only fall to women,” Dittmar, the CAWP scholar said. Men can make a difference, for example, by standing up to employers and advocating for their women counterparts to receive equal pay, or they can even advocate that women take their place on committees involving legislation on reproductive rights.

Giving women a voice and space, and challenging the constraints of masculinity and what a leader looks like, “opens up the game to new players,” Dittmar said. Political party leaders, who are often men, act as gatekeepers and can empower, encourage, and support women to run for office.