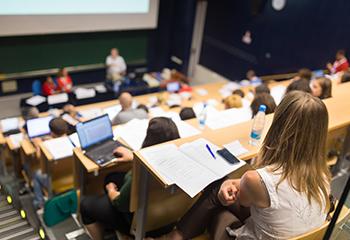 The promise of free college education helped propel Bernie Sanders’ 2016 bid for the Democratic nomination to national prominence. It reverberated during the Confirmation hearings for Betsy DeVos as Secretary of Education and Sanders continues to push the issue.

In conversations among politicians, college administrators, educators, parents, and students, college affordability seems to be seen as a purely financial issue – it’s all about money.

My research into the historical cost of college shows that the roots of the current student debt crisis are neither economic nor financial in origin, but predominantly social. Tuition fees and student loans became an essential part of the equation only as Americans came to believe in an entirely different purpose for higher education.

Cost of a College Degree Today
For many students, graduation means debt. In 2012, more than 44 million Americans (14 percent of the total population) were still paying off student loans. And the average graduate in 2016 left college with more than $37,000 in student loan debt.

Student loan debt has become the second-largest type of personal debt among Americans. Besides leading to depression and anxiety, student loan debt slows down economic growth: It prevents young Americans from buying houses and cars and starting a family. Economist Alvaro Mezzaamong others, has shown that there is a negative correlation between increasing student loan debt and homeownership.

The increase in student loan debt should come as no surprise given the increasing cost of college and the share that students are asked to shoulder. Decreasing state support for colleges over the last two decades caused colleges to raise tuition fees significantly. From 1995 to 2015, tuition and fees at 310 national universities ranked by US News rose considerablyincreasing by nearly 180 percent at private schools and over 225 percent at public schools.

Whatever the reason, tuition has gone up. And students are paying that higher tuition with student loans. These loans can influence students’ decisions about which majors to pick and whether to pursue graduate studies.

US Student Debt vs. College Tuition
The average debt per bachelor’s degree recipient has increased 41% between 2000 and 2015 for four year public colleges. This reflects a general increase in the cost of college tuition. 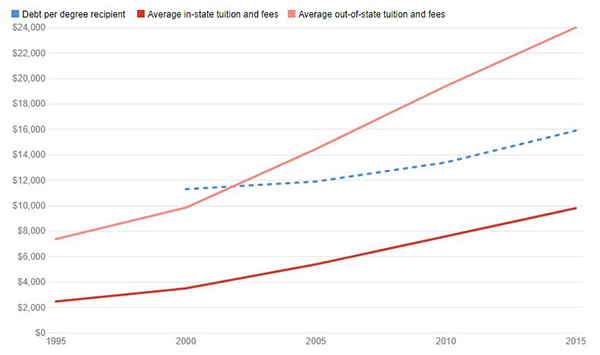 Data is from The College Board and US News and World Report. 1995 student debt data unavailable.
The Conversation, CC-BY-ND

Early Higher Education: A Public Good
During the 19th century, college education in the United States was offered largely for free. Colleges trained students from middle-class backgrounds as high school teachers, ministers, and community leaders who, after graduation, were to serve public needs.

This free tuition model had to do with perceptions about the role of higher education: College education was considered a public good. Students who received such an education would put it to use in the betterment of society. Everyone benefited when people chose to go to college. And because it was considered a public good, society was willing to pay for it – either by offering college education free of charge or by providing tuition scholarships to individual students.

Stanford University, which was founded on the premise of offering college education free of charge to California residents, was an example of the former. Stanford did not charge tuition for almost three decades from its opening in 1891 until 1920.

And even though the cost for educating students rose significantly in the second half of the 19th century, college administrators such as Harvard President Charles W. Eliot [link removed no longer active] insisted that these costs should not be passed on to students. In a letter to Charles Francis Adams dated June 9, 1904, Eliot wrote, “I want to have the College open equally to men with much money, little money, or no money, provided they all have brains.”

College Tuition in the Late 19th and Early 20th Centuries
The total cost of tuition for all US institutions of higher learning from 1875 to 1925. Note that these figures are also influenced by the increasing number of colleges.

Source: A Study of Student Loans and Their Relation to Higher Educational Finance
The Conversation, CC-BY-ND

College Education Becomes a Private Pursuit
The perception of higher education changed dramatically around 1910. Private colleges began to attract more students from upper-class families – students who went to college for the social experience and not necessarily for learning.

This social and cultural change led to a fundamental shift in the defined purpose of a college education. What was once a public good designed to advance the welfare of society was becoming a private pursuit for self-aggrandizement. Young people entering college were no longer seen as doing so for the betterment of society, but rather as pursuing personal goals: in particular, enjoying the social setting of private colleges and obtaining a respected professional position upon graduation.

In 1927, John D. Rockefeller began campaigning for charging students the full cost it took to educate them. Further, he suggested that students could shoulder such costs through student loans. Rockefeller and like-minded donors (in particular, William E. Harmon, the wealthy real estate magnate) were quite successful in their campaign. They convinced donors, educators, and college administrators that students should pay for their own education because going to college was considered a deeply personal affair. Tuition – and student loans – thus became commonly accepted aspects of the economics of higher education.

The shift in attitude regarding college has also become commonly accepted. Altruistic notions about the advancement of society have generally been pushed aside in favor of the image of college as a vehicle for individual enrichment.

A New Social Contract
If the United States is looking for alternatives to what some would call a failing funding model [link removed no longer active] for college affordability, the solution may lie in looking further back than the current system, which has been in place since the 1930s.

In the 19th century, communities and the state would foot the bill for college tuition because students were contributing to society. They served the common good by teaching high school for a certain number of years or by taking leadership positions within local communities. A few marginal programs with similar missions (ROTC and Teach for America) still exist today, but students participating in these programs are very much in the minority.