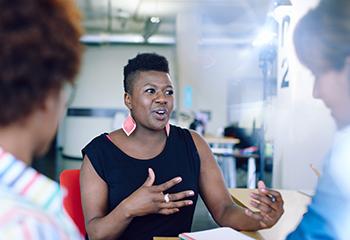 It is a common practice for leaders to request input from others in the course of arriving at important decisions. But do they always understand the impact of their requests? Consider these two scenarios:

1. A financial aid manager requests input from staff on how to improve the student intake process. He calls a one-hour meeting, in which input is offered, and then announces three changes they will implement immediately. Although they tacitly agreed at the meeting, staff members quietly grumbled that their true input was not considered and more time was needed to deliberate.

2. In the wake of mounting competition, the president of a small liberal arts college announces plans to develop a comprehensive 5-year plan for delivering online courses wherever possible across the curriculum. Recognizing the challenges and probable resistance, she expresses her intent to engage all relevant campus constituent groups, including department chairs, faculty, academic affairs professionals, and curriculum development specialists. A couple town halls are held, but criticism soon follows after a plan is pushed through following a few closed-door meetings among top administrative leaders.

Organizational change is more effective when based on input from many rather than a few. Any deliberative process to garner input should include individuals who are ultimately expected to implement decisions made. Many leaders recognize this but may not always realize how trust is violated when, intentionally or not, their calls for deliberation do not match their actions. Although full deliberation in this manner can be complex, it is often necessary to ensure the best outcomes. In your efforts to engage in such processes, consider these questions:

Do you understand the commitment involved? It involves dialogue. Based on the Greek roots dia, meaning “through,” and logos, meaning “word,” dialogue means, in essence, “the flow of meaning.” Dialogue has been referred to as a process for creating a “container of shared meaning” where the beliefs, values, ideas, assumptions, and related input of all group members are placed in a “container” and fully considered before a decision is reached. Dialogue processes may require a number of meetings or, in the case of broad-based initiatives, multiple meetings among numerous constituent groups, to ensure all concerns are heard and to guard against pushing quickly to decisions without full deliberation. They require time and commitment to allow group members to work through multiple, divergent viewpoints, deliberate until they find points of agreement, and ultimately reach decisions that reflect a convergence of their best thinking.

How much deliberation is needed? A leader would not engage in lengthy dialogue processes for basic operational decisions. Further, in situations like the first scenario, the leader may wish to retain ultimate decision making authority, but base his decision on the informed input of those with direct knowledge and engagement in the matter. He would then attempt to arrive at a decision that incorporates as best possible their collective ideas, even if achieving full consensus is unrealistic. One hour may be insufficient time for this. For something as broad-based as the second scenario, a significant commitment of time and resources will be required as the initiative suggests the potential for sweeping change, significant impacts on those expected to carry out decisions, and a need for buy-in from diverse constituencies.

Can you set aside your leader prerogatives to allow for an open process and the possibility of outcomes different than what you might have envisioned on your own? A genuine search for the best ideas will require you to set aside your “badge of authority” and demonstrate that your input is no better or worse, and should be given no greater or less weight, than any other. This may mean, for example, listening more than you are used to in other meeting situations and asking more questions than asserting positions. Do a “gut check” to assess whether your participation chills input from others or whether any statement or action on your part leaves the impression, however inadvertent, that you are devaluing or overriding any suggestion or proposed decision from the group. You might use trained facilitators to help balance inherent power differentials. Better still, consider stepping away from all or portions of the deliberation process to ensure greater safety and openness among group members, leaving to facilitators the task of collecting anonymously the necessary data and information to move forward with decisions.

What are the consequences for failing to seek others’ input? Or failing to follow through with such requests in a meaningful way? Interested constituents will quietly grumble after they’ve been pulled into a dialogue process and perceive their input wasn’t fully heard or valued. Yet that may be the least of the leader’s concerns. Has the leader established a pattern of making half-hearted requests for deliberation, or does such a pattern exist among many leaders across the institution? If so, beyond grumbling, many employees will ultimately leave while those who stay will decline to offer further input because they no longer feel their contributions matter. For situations like the second scenario, add to the equation the loss of trust and goodwill that is essential for implementing systemic change.

Can you afford the time to manage reactions and correct mistakes for failing to engage in the appropriate deliberative process? Leaders who are reluctant to engage in appropriate deliberation with stakeholders often complain “we don’t have time.” This mantra must change to “we don’t have time not to.” Effective leaders recognize and will avoid the added time, cost and frustration that come with reacting to complaining constituents who were not consulted and with correcting plans and actions that should have included their input in the first place.