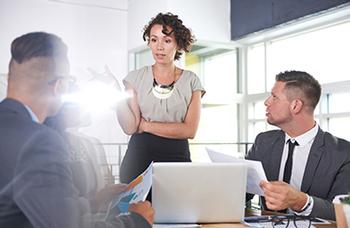 Effective leaders understand their obligation to fairly treat employees on their teams. But do they understand the need to intervene to address negative, abusive, and unfair treatment they witness, even when they lack direct authority or influence over the perpetrator and the target of the behavior? Consider these scenarios:

Jim, the director of one department, asks to meet with Marcia, the director of another department who has a reputation for being abusive. Marcia brings Connie, who reports to her. At one point, Jim asks Connie about a project she is working on. As Connie begins to answer, Marcia appears annoyed. She abruptly tells Connie to “stop talking” and even uses a hand gesture signifying that Connie should shut her mouth. Marcia then responds to Jim’s inquiry. Connie is clearly embarrassed.

Jim has a good reputation for treating employees respectfully. Employees from Marcia’s unit enjoy meeting with him and his staff to discuss projects of mutual interest, at least when Marcia is not present. Knowing that Jim can be trusted to keep a confidence, Tony asks to meet privately with him. Tony shares how Marcia can be abrasive and disrespectful to all employees in her unit, but particularly Connie. Tony asks Jim for his thoughts on how to help Connie.

Jim and Tony are bystanders to negative, abusive, and unfair treatment experienced by others. They are neither direct recipients of the behavior nor do they have direct authority over Marcia, who is Jim’s peer and Tony’s boss. They have no legal obligation to intervene as the scenario involving rude behavior does not implicate reporting requirements such as those imposed by Title VII and Title IX for sexual harassment and assault. But they have the moral obligation to intervene if they can.

Understand your obligation. When we witness a crime, such as an assault, we understand the moral obligation to respond in some way. We call 911 or yell, “Stop!” hoping the perpetrator will run away. If we are brave or foolhardy, we may try to defend the victim with physical force.

As citizens and neighbors, we understand the obligation to do something to stop a crime. Do we feel the same sense of obligation when we witness workplace “crimes” of negative, abusive, or unfair treatment? Tony accepts this obligation out of a genuine concern for Connie, although he may be limited in what he can do based on his subordinate position and a probable fear of retaliation. But what will Jim do?

Consider your options for intervening. Not every instance of poor behavior demands the same intervention. The manner in which you intervene will depend on your perception of your ability and skill to respond and whether your response will positively (or negatively) influence the situation. Some options to consider are:

• Step immediately: Jim might state in the meeting that Marcia’s comment is inappropriate, signaling that it should not be repeated. If repeated, Jim might discontinue the meeting to avoid further embarrassment for Connie.

• Disrupt the behavior: For example, Jim might quickly change the subject, giving no credence to Marcia’s behavior. He might also acknowledge Connie and show appreciation for her comments, counteracting Marcia’s rudeness. The point is to take some immediate action to disrupt the behavior and support the target.

• Check in with the target of the behavior: Jim might later approach Connie to let her know he considers the behavior to be inappropriate, to inquire how she is doing, and to offer support regarding any similar interactions she may experience with Marcia.

• Listen and provide advice: Jim can listen to concerns about Marcia in a confidential manner, provided the issues do not involve other legal or policy requirements, as noted. If requested or warranted, Jim can offer advice on how Tony or Connie may handle similar situations in the future. Being a witness can give the target reassurance as he or she continues to navigate the situation.

• Support the target to seek help: Jim can offer to help Tony or Connie go to HR or other internal equity office to seek further support. While targets of such behavior are often reluctant to seek such support, particularly if the perpetrator is their boss, helping make initial contact could be the necessary first step to help them overcome this reluctance.

• Create greater awareness of the perpetrator’s behavior: Marcia has likely demonstrated a pattern of such behaviors. Jim might inform his boss or others with responsibility for addressing employee misbehaviors about his concerns. Jim should proceed in a professional manner with the goal of benefitting the organization and protecting employees, not based on ill will for Marcia. This step may especially be necessary if Jim’s attempts to address matters directly with Marcia were unsuccessful.

Learn and grow. Bystander interventions are not easy nor will your actions always be popular. Such interventions require sensitivity and political savvy. As with any other circumstance involving tough moral and ethical decisions, you will face tough choices about whether and how to intervene. Leaders must first understand the importance of intervening as bystanders and accept the obligation for doing so. They must then develop greater skill and savvy to step in to meaningfully assist others who experience poor treatment. No need to play the hero. But you are asked to develop and exercise new muscles for intervening that have perhaps atrophied so that you may more effectively support organizational efforts to improve the quality of work life for everyone.