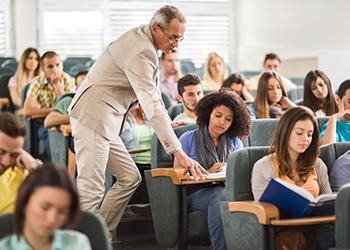 In October a student at Suffolk University in Boston made headlines when she shared a photo of a returned paper she had received. Her professor accused her of plagiarism, apparently because she used the word “hence” in the paper. Next to the word hence the professor wrote, “This is not your word,” and underlined not several times. The student, a first generation college student who identifies as Latina, felt humiliated. Because there was no other evidence that the paper was plagiarized, it seems fairly clear that the professor’s accusation was based on some form of bias; the student (and now the Internet) assumes racism.

When I was in graduate school I had a good friend who came to the program from a well-regarded private school. He held a prestigious fellowship. My friend and I often worked together on projects. For one joint project, we turned in the exact same paper (partners were allowed to do so). He received an A and I received a B. There are biases on which the professor may have graded our papers that would clearly be seen as a case of prejudice. But what if the professor simply read our papers differently?

What if when the professor picked up my friend’s paper he expected to see a well-written, insightful paper from a promising young scholar, and so he did. When he picked up my paper he did not have the same expectations and so he saw the flaws. In this case, the professor’s reaction would be an example of confirmation bias.

Confirmation bias is our tendency to see what we expect to see, and discount evidence that goes against our beliefs. As Yogi Berra put it, “I wouldn’t have seen it if I hadn’t believed it.” Another bias possibly in play is known as the “primacy effect.” The primacy effect privileges first or early impressions over later evidence.

Bias in the classroom is rarely as blatant or obvious as what happened at Suffolk University or in my graduate school experience, but it still exists. In addition to personal biases, professors may become biased against an entire class based simply on timing. For example, a class held on Friday afternoon when the professor is tired may be seen as more unruly or less responsive than a class held on Tuesday morning. A professor who starts a semester in a particularly emotional mood may have a hard time giving those students the same attention and benefit of the doubt as she does other students.

According to Sara Gorman, co-author of “Denying to the Grave,” a book exploring bias and other reasons behind science denialism, confirmation bias can be especially strong among academic researchers.

According to Gorman, “Academic researchers have clear incentives to find information that agrees with their research findings. In many ways, academia is set up to reward very close focus on particular research areas, and professors often become defined by their findings. In some cases, professors become so personally identified with their research findings that any acceptance of disconfirming evidence would activate cognitive dissonance, an extremely uncomfortable psychological state of affairs that our minds take great pains to avoid.” This causes researchers to seek out evidence that confirms their beliefs, a phenomenon known as the “experimenter effect.”

When those researchers are also classroom teachers, their biases can come in to play. Obviously, this adherence to only one side of an issue can prevent professors from presenting evenhanded information in class. Even in a science class, where you expect to encounter objective fact, you could take the same class from two professors and wind up with two very different understandings of the subject, based on their individual research.

If professors are just as, or even more, likely to suffer from biases as other people, what can they do to protect the integrity of their classrooms and ensure fair treatment of students?

Gorman recommends that for classroom situations consistent, written, detailed assessments of student work are helpful and creating a system that is as objective as possible for assessment is essential. One possibility is to ask students to turn in papers anonymously and then claim their papers after they’ve been graded. Another might be to employ TAs to help read and comment on papers and tests.

To counteract racial, gender, or other personal biases, Gorman recommends that concerned professors concentrate on getting to know students as individuals. According to Gorman, “If a professor commits to spending 30 minutes at the start of each course with each and every student, gathering the same information across the board, then a student of color is more likely to be seen as an individual.”

Of course, this suggestion is not practical for many classroom situations. According to Gorman, awareness of potential bias is the first step in overcoming it. Gorman stresses that administrators or others wishing to make professors aware of their biases lead from “a place of empathy” and make clear that everyone is prone to behaving in a biased manner.

Bias is a natural part of human behavior. We make thousands of decisions a day, many of which by necessity are based on preconceived or pre-learned ideas. But professors have an obligation to their students to try and overcome their natural biases and provide all students with equal opportunities. With effort and understanding, it can be done.