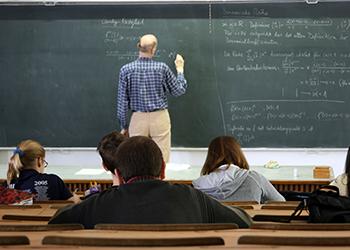 Your class has sucked all of the fun out of being ignorant. If I had not taken that stupid science class, I too could be lost in the euphoria of ignorant bliss.

— Extract from a student course evaluation for “Foundations of Science”

What is Scientific Literacy?
For many years, professor Matt Rowe worried about the gap between the average student’s understanding of science and what was required for true scientific literacy.

“All the indicators showed that we weren’t doing a very good job in science education, especially for the much larger group of students who were not going to become scientists. They entered the university believing in all kinds of pseudoscientific nonsense; and then they took two or three science courses as their gen ed requirements and then they left the university still believing in the same pseudo-scientific nonsense.”

As chair of the biology department at Sam Houston State University (SHSU) in Huntsville, Texas, Rowe found an ally in professor Marcus Gillespie, the chair of the geography and geology department. According to Rowe, the two men shared a passion for improving introductory science education:

“In his wonderful book, ‘The Demon-Haunted World,’ Sagan wrote, ‘If we teach only the findings and products of science-no matter how useful and even inspiring they may be-without communicating its critical method, how can the average person possibly distinguish science from pseudoscience?’ That quote was a motivator for both of us and a guide to what was needed in science education.”

Gillespie had been thinking about building an introductory science course based on Sagan’s ideas for many years; however, apart from Rowe, he found his colleagues in the sciences did not share his enthusiasm. “There are a lot of scientists who are more comfortable teaching science as an accumulation of dry factoids, so they focus on scientific content to the exclusion of helping students understand the scientific process,” Rowe suggests.

Capitalizing on Institutional Processes
The university’s reaccreditation process provided a catalyst for change. New requirements from the Southern Association of Colleges and Schools (SACS) presented Rowe and Gillespie with an institutionally-backed opportunity to develop their course. Rowe explains:

“[P]art of the process was to identify an unmet student need and try to tackle and resolve it as the centerpiece of the reaccreditation. The university put out a request for proposals, inviting faculty to propose courses that would help students build critical thinking skills. Marcus responded with our proposal to build scientific literacy in college graduates by focusing specifically on critical thinking and scientific reasoning.”

The university selected their proposal for development: a plan for a course, “Foundations of Science,” that centered on the development of critical thinking and scientific reasoning as the foundation of scientific literacy.

SHSU’s “Foundation of Science” course offers not only a thoughtfully-constructed model for general education science instruction, but also an instructive case study for how an ongoing institutional process (in this case, reaccreditation) can bring together the resources necessary to effect change. These resources enabled the team to: (1) successfully pilot a creative solution to an existing academic problem; (2) promote acceptance by reluctant faculty; (3) publicize a new opportunity to apathetic or potentially-hostile students; and (4) validate its success through meaningful assessment efforts.

Funds for course development, promotion, and assessment were available internally because of its inclusion in the Quality Enhancement Plan put forward in SHSU’s SACS documentation. The original Sagan-inspired vision of how best to teach science found validation within the larger framework of a university emphasis on developing critical thinking skills. Gillespie affirms, “We can’t teach them the answers to every question. We have to teach them a methodology.”

Crafting a New Model
Rowe and Gillespie assembled a team and the group jointly identified key strategies and components for their new course, as documented in their paper, “Redesigning a General Education Science Course to Promote Critical Thinking:”

“The course, titled Foundations of Science, differs from most gen ed science offerings in that it is interdisciplinary; emphasizes the nature of science along with, rather than primarily, the findings of science; incorporates case studies, such as the vaccine-autism controversy ; teaches the basics of argumentation and logical fallacies; contrasts science with pseudoscience; and addresses psychological factors that might otherwise lead students to reject scientific ideas they find uncomfortable.”

Gillespie acknowledges that there was substantial pushback among his colleagues in the school of science throughout the process. “For some of my colleagues in the hard sciences, this concept was alien to them. They had a lot of misconceptions about the course when it was first described to them.” The course design phase, which lasted two years, provided opportunities to substantiate the intellectual basis for the course and to lobby colleagues for support.

“Foundations of Science” uses the case study method and teaches students to apply an over-arching set of principles, FiLCHeRS, as a way of thinking and reasoning about scientific questions:

“FiLCHeRS [is] a framework we find particularly useful for helping students distinguish science from pseudoscience. The easily assimilated acronym (once students understand what it means to be filched) stands for Falsifiability, Logic, Comprehensiveness of evidence, Honesty (as in ‘intellectual honesty’), Replication of research, and Sufficiency of evidence, respectively. … Our repeated use of the framework provides students with a systematic, coherent method for analyzing claims. They quickly learn to spot pseudoscientific claims because such claims violate many of the rules, while good scientific claims do not. In short, [FiLCHeRS] provides a compelling demonstration of the reliability of the scientific method.” Supplemental Material: Rowe, et al.

Acknowledging the psychological limits of attitude change, Rowe and Gillespie designed the course to gradually build student acceptance for ideas and intellectual questions that might be uncomfortable for them. “We begin the course with a discussion of witches,” Gillespie explains, “because that’s not a topic that most students are invested in at the moment.” With the distance of history, students learn what can be at stake in scientific disputes. “A half million people lost their lives over the centuries of the Great Witch Hunt,” Rowe cautions. “That story provides the means of teaching students about evidence and logic.”

Assessment and Impact
In a course evaluation, one of the students described her fears at the beginning of the course: “I entered the classroom terrified of science and left the first day bound and determined to hate your class. In fact, I cried all the way [home] because I was certain that the objective of the course was to turn everyone into liberal atheists.” The overwhelming majority of SHSU students are Texas residents where science curricula are the subject of contentious legislative debate. “Many students are very uncomfortable with cosmology, astronomy, the origins of the universe — and evolution. Evolution is the very last topic – by design,” the group acknowledged.

As reported in “Redesigning a General Education Science Course,” the group’s approach was validated in the assessment phase:

“Using a pretest versus posttest design, we show that students who completed the experimental course significantly improved their critical-thinking skills and were more willing to engage scientific theories the general public finds controversial (eg, evolution), while students who completed a traditional gene ed science course did not.”

The same student who cried on the way home after her first day of class wrote in her final evaluation of the course: “I learned a lot and I enjoyed every class. I can honestly say, without any doubt, that I got more out of this course than any course I have ever taken.”

Professor Rowe teaches a version of the class at Michigan State University, where he is currently on the faculty. Both professors remain in touch with some of the students who took the SHSU “Foundations of Science” course and note that some have gone on to become science majors – including some of those who claimed to hate science.

“Foundations of Science” is now a required course for all SHSU education majors and is strongly encouraged for students in the College of Business Administration. The impact of the course and its approach to scientific literacy is set to expand on a national scale even further in 2017. Professor Gillespie and other members of the SHSU group have been working with the American Association of State Colleges and Universities to build on the ” Foundations of Science” model as part of a “Science for Citizens” course initiative underway nationally.