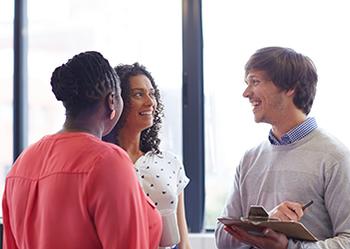 Since her 2004 SNL debut, Debbie Downer has featured in countless internet memes as the unlovable mascot of pessimists and naysayers everywhere. Even “the happiest place on earth” proved no match for Rachel Dratch’s iconic character, who spread her morbid observations like bad fairy dust, taking down everyone around her.

Not all contagion is negative
Ten years later, Pharrell Williams’ ubiquitous tune, “Happy,” provided strong cultural evidence that positive emotions, as well as negative ones, can prove powerfully infectious. Now, researchers have validated that both positive and negative emotional contagion can have far-reaching effects in the workplace.

in”Faster than a Speeding Text: ‘Emotional Contagion’ at Work,” Sigal Barsade, the Joseph Frank Bernstein professor of management at Wharton, assures managers that moods can be as rapidly distributed around the office as a group text message.

“[E]Motions, both positive and negative, actually spread among your employees like viruses. People routinely ‘catch’ each other’s feelings when working together in groups. It’s not surprising that this influences your employees’ moods: what’s more surprising is that it significantly influences their judgment and business decisions as well. Usually without anyone having a clue what’s going on.”

This form of emotional contagion parallels cognitive contagion – in which employees catch each others’ ideas – but with some important differences. Barsade writes:

“Studies show that emotional contagion most often occurs at a significantly less conscious level, based on automatic processes and physiological responses (eg, Hatfield, Cacioppo, and Rapson, 1994). While early work focused on contagion between two people, in my article ‘ The Ripple Effect: Emotional Contagion and Its Influence on Group Behavior,’ I find that emotional contagion is a significant force in groups as well.”

Will Rudeness Go the Way of Smoking in the Workplace?
In a widely-reprinted article, Trevor Foulk, a Ph.D. candidate in Business Administration at the University of Florida, issued a caution against rudeness at work because of its contagious nature. In a recent interview, Foulk discussed the reaction to his research findings, observing that when it comes to low-intensity negative behaviors, “there’s a large sense of surprise that these behaviors have the robust consequences that they do.” In fact, Foulk discovered much longer-lasting consequences for incivility in the workplace than he had expected, a result he will be investigating further in future studies.

“Rudeness,” Foulk suggests, “has been largely tolerated because we don’t realize the consequences. We assume people will just get over it.” Noting thatRudeness in surgery settings can result in mortality,” Foulk stresses that most people are still surprised by “the profound consequences of rudeness.” Comparing incivility to smoking, which was once tolerated in the workplace also, Foulk argues that “as we come to understand something is harmful, we as a culture have the capacity to change these norms and behaviors.” He predicts that “over time, we can start having a conversation about what behaviors are accepted at work. What is the lowest level of insult we’ll accept?”

Foulk’s work focuses largely on the contagiousness of negative behavior (incivility), whereas, Barsade has tested the virality and impact of both negative and positive emotional seeding on group behavior.

Provoking Happiness and Improved Performance as “Automatic” Responses
In Barsade’s study, business students participated in a simulated management exercise in which “they were part of a ‘salary committee’ negotiating how best to allocate a limited pot of funds, so they had to balance getting the most for their own candidate with maximizing the overall benefit to the company.” An actor, “trained to convey one of four different mood conditions: cheerful enthusiasm, serene warmth, hostile irritability, and depressed sluggishness,” was seeded into each group as a confederate. Barsade found that:

Just as Foulk and other researchers of incivility have reported, Barsade found that positive mood contagion produced automatic behavioral results; study participants did not consciously link their thoughts or actions to any outside agent:

“When the students were asked why they allocated the funds the way they did, and why they thought their group performed the way it did, they pointed to factors such as their own negotiating acumen, or the qualities of the ‘candidates’ they had been assigned. They had no inkling that their behavior and decisions, and that of their group, had been directed by the displayed emotion of the confederate.”

Viral Management
Barsade encourages managers in today’s team-oriented environment to use their knowledge of the impact of emotional contagion to not only manage how they present their own emotions, but also, spread emotions that will contribute to higher productivity, job satisfaction, and team performance. Barsade suggests that training yourself “to be aware of your own mood and deliberately lift your own spirits before interacting with your team” is helpful. “You can make eye contact to spread positive emotions faster, and limit your gaze with persistently negative people to neutralize their influence,” she advises readers of “Faster than a Speeding Text.”

Increasingly, managers and leaders are being called upon to master not only their own emotional responses to the work environment, but to craft strategies and interactions that will create a more supportive, productive, and energizing. work culture for all. Ultimately, paying attention to what’s “going viral” in your workplace may spell the difference between success and failure for you and your team.