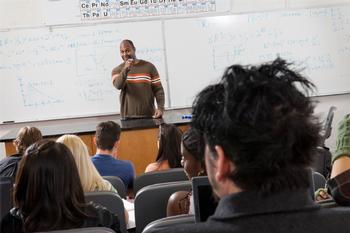 Imagine this scenario: after going through the frustrations of being a high school mathematics teacher, you went back to school for a PhD and landed your dream job.

Today, you are an assistant professor at one of the top education departments within a university system that is poised for amazing growth. You have had a very successful first three years – publishing in journals considered top tier by your department colleagues and serving as a consultant on a couple of large-scale grants.

But as far as your university social life goes, you go out for a few lunches with your departmental colleagues. You feel a bit disconnected. So, you invite a few colleagues over to your house for dinner. You and your partner cook an incredible meal.

Conversation and wine flow, and all seems well.

While you are grabbing dessert, your wife tells your colleagues about your undergraduate days, including being in a hip-hop and dance group. They seem way too interested, asking an exorbitant amount of questions, and laughing wildly. After several minutes you decide to politely change the subject.

Overall, you and your wife call the dinner a success.

A few days later, at the request of your department chair, you give a dynamic presentation about your research during the faculty meeting. The effort in preparing this presentation paid off with lively dialogue afterwards.

As you finish up and return to your seat, your two colleagues from dinner announce to the faculty that besides being a stellar researcher, you are a rapper and dancer.

They apparently took a picture of a picture from your house with you and your hip-hop group. It is now on the large projector, the same projector where you finished your presentation.

The rest of the faculty is entertained, fueled by your colleagues’ request to you to “bust a move.”

The truth is that for many black academics, this is not an imaginary scenario. This is one of the many narratives of presenting while black.

I am a researcher of black students and faculty in STEM fields, and this narrative is part of my experience. Before presentations at conferences, I hear statements from colleagues, such as

All right, it’s time to go perform, Let me get ready to shuck and jive, Gotta go put on my Blackface…”

I also know how at these presentation venues, comments and criticism bestowed on black presenters lean more towards their entertainment value than their intellectual value. So, I embarked on this study to see if other black academics were feeling or responding to this same pressure. My study provides a window into the experience of black faculty members, who are expected to be “entertaining” when presenting academic research to mostly white peers.

From 2013 to 2014, my colleague, Lasana Kazembe, adjunct professor at DePaul University and I interviewed 33 African-American faculty members from institutions across the country. The results were disappointing, but not particularly surprising.

Their personal experiences provide a unique perspective on “presenting while black.”

My interviews revealed that an overwhelming majority of the participants were advised regularly by white peers to be “more entertaining” when making research presentations, as well as to “lighten up,” and “tell more jokes.”

Alternatively, some presenters’ research was met with shock and awe, as the audience was taken back by the high quality of the research and made their low expectations known with statements such as “I’m pleasantly surprised,” “I had no idea you were that bright,” and “you must be a genius.”

These black professors were interviewed about their participation in a number of presentation contexts, including national conferences, symposia and campus job talks. Study participants discussed Encountering multiple layers of racial stereotyping and bias.

For instance, black faculty were penalized for doing the following: taking a sip of water during the middle of her sentence, not pausing before answering questions from the audience (“she didn’t even reflect on the question”) and were openly accused of not citing enough by mostly white male researchers.

Accusations were also made of black faculty’s presentation styles and behaviors, such as “constantly waving her arms and being wildly animated during her presentation. It was just too much attitude,” and being criticized because “his laugh was too boisterous, too domineering.”

Black females additionally noted being subject to their colleagues’ preoccupation with their clothing choices and hairstyle, and reported being admonished to play down their “passion” and “smile more.”

These experiences seem to have an impact not only on their faculty career trajectories (some faculty are considering leaving or have left academia since the interviews), but also on their emotional and physical health.

Arline T Geronimusresearcher at University of Michigan, along with her colleagues, has documented the long-term physical, mental, emotional and psychological effects of racism and of living in a society characterized by white dominance and privilege, a phenomenon she calls “weathering.”

Weathering severely challenges and threatens a person’s health and ability to make healthy responses to their environment. This can cause wear and tear, both physical and mental, and lead to a host of psychological and physical ailments, including heart disease, diabetes and accelerated aging.

For an academic, presenting research to peers can open doors to departmental collaborations, research funding opportunities and job offers. Faculty members must present effectively and persuasively to stand out from the crowd.

Scholars of color face additional hurdles for acceptance that range from micro-aggressions, subtle and stunning racial slights, to outright racism. Faced with racial battle fatigue, many try to change who they are in order to fit in, or simply give up and change careers. During my interviews, black faculty said it was the micro-aggressions, subtle and stunning racial slights, that caused them the most anguish.

The persistently racialized stigmatization of black faculty is particularly troubling given the low number (just about 6%, according to 2013 data collected from the National Center for Education Statistics) of black faculty working in higher education.

The stunning lack of diversity among higher education Faculty presents serious challenges to efforts to level and democratize the educational playing field.

Researchers too need to pay more attention to this issue. Future research needs to center on how to reduce the impact of such racialized experiences so as to improve faculty retention and improve the quality of black academics’ well-being.

Blacks have a long history of being objectified for entertainment value, going all the way back to the blackface minstrels, a form of entertainment beginning in the 1810s in which performers used make up to represent a black person. In these performances African Americans were depicted as comical, lazy or dim-witted.

Today the racialized objectification of African Americans may not always be as overt as it was a century ago, but the “black as entertainment” ideology remains alive and well.